The Red Raiders pull off the upset of the #9 ranked Cyclones, behind the stellar second half play of DeVaughtah Williams and first half of Toddrick Gotcher.

Not in one hundred years did I think that Texas Tech would be able to pull off the upset considering how the last few games had gone, but it happened. Texas Tech upsets the #9 Iowa State Cyclones 78-73, led by a barrage of three-pointers and a slew of free throws. That's a recipie for winning basketball games when you have an under-manned team and you struggle offensively. 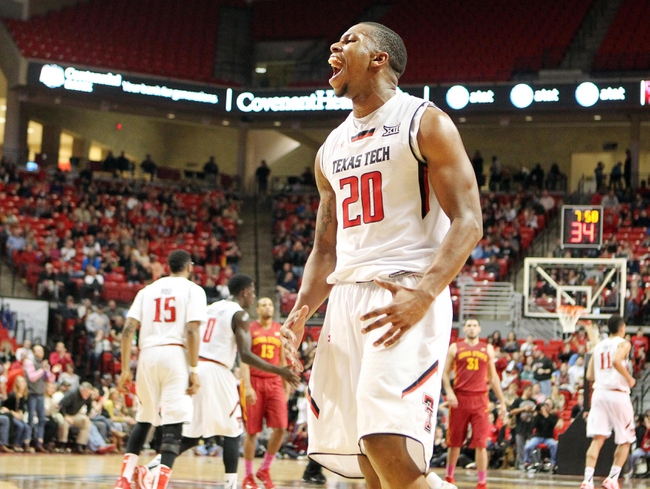 SG DeVaughtah Williams. Williams was simply magical yesterday, scoring 22 points on 5 of 11 and making 3 of 6 three-pointers and 9 of 11 from the free throw line. Add in 6 rebounds, 2 assists, a steal, a block and a couple of turnovers and you've got just a fantastic game from Williams.

1. Movement. Rather than the traditional high-low offense, Texas Tech seemed to run with two low post players and a pretty simple screen game for those guards coming off of those low post players. This helped free Williams and Toddrick Gotcher, who was 5 of 9 from the three-point line and was huge in the first half in making sure that Texas Tech got out to an early lead. This is a pretty big departure and I'm a bit surprised that Tubby Smith made the change, but this sort of change only works if your team can hit three-point shots and Texas Tech hasn't always shown the propensity to do that. I thin Smith is just a lot more conservative and wants to make sure that Texas Tech stays in every game because I believe that he thinks that he if he can keep it close, he can out-coach the opposing coach. I think he's right. With Iowa State, you had a team that was one of the best in the best in the country offensively and more than likely wouldn't be able to keep pace with ISU unless something changed. The problem with this three-point offense is that you can also shoot yourself out of a game incredibly quickly.

2. Odiase Out and a Tight Bench. C Norense Odiase was out with the flu and as you all know, Justin Gray is out for the year with knee surgery, which means that a short-handed Texas Tech was even more short-handed than usual. This actually ended up being a pretty good thing because Smith very much tightened up the bench which meant that the only players that played significant minutes were Aaron Ross, Keenan Evans and Toddrock Gotcher. I think this created for some more consistent offensive flow and this also meant that Smith generally played the guys that could shoot, as Onwuasor only played 10 minutes for the game. It doesn't always work out, because you have guys like Evans that goes 2 for 9, but then you can have it work out like Gotcher going for 17 points including 5 of 9 from the three-point line.

3. Breaking the Press. It wasn't always pretty, but it was a heck more efficient yesterday. There were times in the past where Texas Tech couldn't even bring up the ball and yesterday there were multiple times where Texas Tech found Zach Smith, the in-bounding player, immediately after inbounding the ball and then Texas Tech would find the open player on the opposite side. Texas Tech still had 13 turnovers, which is probably par for the course of a game, but Texas Tech still seemed more composed than normal. Not only that, but this team did a pretty good job of getting the ball to the middle of the court as well. More than anything, this is a really nice sign of maturity for these players as they figure out how to get the ball inbounds. It's somewhat strange to write about this, but with the number of pressing teams on the schedule, this is a pretty significant improvement.

4. Ross and Manderson in the Post. I don't recall if I wrote about this last game, but I've thought that the play of Aaron Ross has been pretty good. He's involved offensively, and although he has limitations defensively, he's really giving full effort. His stat line isn't going to impress anyone, but he consistently chips in. When the offense was your high-low offense he understood that the low post player has to make a move otherwise this isn't going to work. Similar things happened with Manderson, who displayed some really nice moves in the post and kept moving towards the basket. The post players have the longest ways to go offensively and I still think that Odiase would be well-served to develop a short hook shot because there isn't a player that can get between him and the basket if he gets it in the post.

5. So Many Little Things. There were so many little things here where it looked like that Texas Tech could have lost this game, but it never happened. Niang's bank-shot three-pointer. Ross' near elbow clear-out that could have resulted in a flagrant (it wasn't) and so many little things. Williams was a star in the second half and the offense that kept this going. And Turner's double-double was terrific and should be mentioned. Yeah, Turner was huge in that he finished with 13 points, including 3 of 6 from the three-point line, with 10 rebounds, 3 assists and only 2 turnovers. That's the sort of point guard play that Texas Tech has always needed. Not perfect play, but 11 to 13 points from Turner was and is absolutely necessary.  This team showed resiliency and that's really encouraging.  They finished the fight and that didn't happen against LSU.

No stats from StatSheet today.