VTM's attempt to make the world a better place without LeBron James.

We introduced the mail bag segment last week and most folks assumed this was only a naked attempt by me to promote RC Buford, and all the assets he has behind him and also boobs. I could actually hear eyes rolling.

But despite all that, we got a great mix of questions. So let's get started.

Question from Steve: Any word on whether or not the Texas Tech Staff will get back to having a coaching clinic for area HS coaches? I think it was a great link to coaches and some of the talent around here during the Leach days. Tuberville's version of this was, like the team during his tenure, much more subdued and less entertaining. Looking forward to Kliff bringing it back to prominence as well. Thanks!

VTM Mailbag: Thanks for the question Steve. Unfortunately, we were unable to get you a definitive answer. Seth emailed Kenny Bell (in charge of football operations) but we didn't get a response. I sent a few questions in as well, but didn't get anything back in time. We do know there was a coaches clinic in San Angelo over the weekend and we'll keep watching for further updates. If there are any readers that can help us out, please let us know.

Question from @StevenEphAustin: How much longer do you expect us to play Baylor in Dallas? Who would you rather see us play in a neutral site game?

VTM Mailbag: My bet would be that the Tech/Baylor series will return to normal when Baylor's new stadium is complete. With all the renovations going on at the Jones, and with Baylor's new stadium, I would assume both schools would want to return to a traditional home and home rotation. As for question number 2, I tried to think outside the box. What if Leach builds Washington St. into a decent top 25 program and Kliff takes us there as well? It might be a fun series to play in the MetroPlex (or cough cough San Antonio cough cough) with some juicy story lines and guaranteed national exposure.

Question from Concerned Outsider:I've only been to Lubbock 3 times and I'm still curious how someone from the outside would ever decide to spend the prime of their youth attending college there? Did I miss something? Is their some part of the city I missed? Do cow urine and dust storms mix in the air to create some sort of brain paralysis?

VTM Mailbag: Cow urine and dust storms only cause brain paralysis for guys in Affliction t-shirts and spiked hair highlights. The rest of us make it work.

Question from FriscoRaider: Exactly how many episodes of Gunsmoke did Burt Reynolds appear in as Quint?

Question from Red and Black 71: Have you ever seen Art Briles’ full sleeve tats?

VTM Mailbag: We've never seen him in short sleeves, but we did see him without his hat once. Just once. 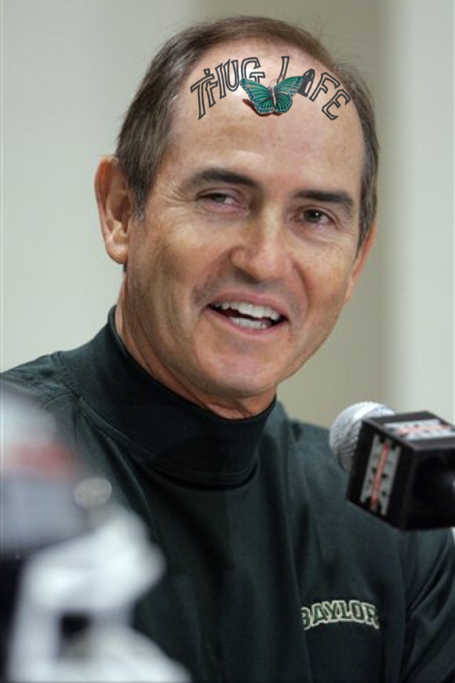 Question from TTUSOL14: If you could go back in history and give twitter to any athlete (during their career) who would it be?

VTM Mailbag: I hope this question spurs some conversation. I thought about it for a while and here's what we've got:

1. Ted Williams: Would love to hear him talk shit about DiMaggio and dream of having his head frozen by his kids.

3. Shawn Kemp: He'd send cool Instagram pics of all his food. ALL THE FOOD.

And, the final question of the week from oldschoolraider: How do you get blood off concrete?

VTM Mailbag: A lot easier than off a turnip, I'll tell you that.

If you have time, you can follow all these steps. You can also use a can of coke I think, or maybe that's how you fix your car battery. If you're in a pinch though, and need a "fixer" it might be best to call this guy and not ask any questions:

Thanks to all of you that submitted a question, and we apologize for not getting to all of them. Keep sending them in and we'll do what we can. Email your questions to SARRMailbag@yahoo.com or submit via twitter to @FakeWillyT. Again, most of my followers are lawn care companies so I'm generally pretty quick to respond.