The Red Raiders were down as much as 20, but continued to fight back in the second half, led by freshmen Keenan Evans and Isaiah Manderson.

When things look really bleak, they did down deep and they will play the opposing team incredibly hard and make life tough. The Red Raiders were down by twenty points in the second half, but never gave in and eventually fell to the #11 Texas Longhorns, 70-61. I had a K-State friend text me after the game and verify what I thought, which is that Texas Tech has a ton of fight and a ton of heart. Yes, this team is playing a ton of freshman and you can see the talent disparity when you play a team like Texas, but Texas Tech is going to give teams fits in conference play, all the while, these freshmen are getting valuable minutes and learning how to play in the Big 12. 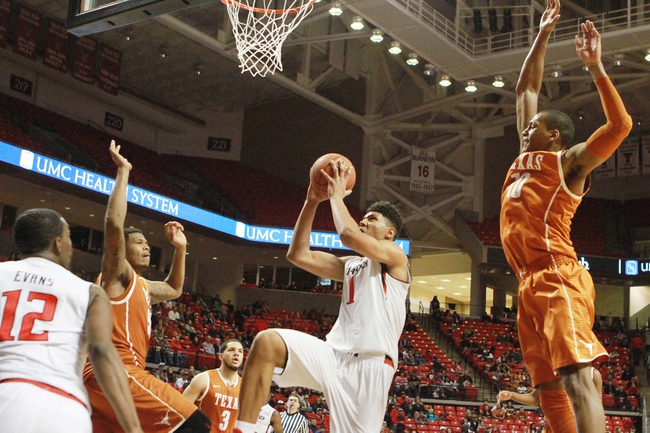 PG Keenan Evans. Evans made 3 of 6 shots and only finished with 9 points, but he was a heck of an influence on the game. We'll get to Evans' play as a point guard, but he also finished with 3 boards, 4 assists, 1 turnover, 1 steal, and 1 block in just 23 minutes.

1. Dominated on the Boards. This wasn't some huge secret, that Texas was an incredibly big team up front and they did dominate the board, having a rebounding advantage of 41 to 29 over Texas Tech. Texas is one of those rare teams where their size will present match-up problems for just about every team and Texas Tech is no different. Head coach Tubby Smith said after the game that this sort of size presented problems, especially with Jonathan Holmes starting at the small forward:

We probably should’ve gone with a bigger line up maybe and find our way. When Jonathon Holmes is at that three-spot it creates a real problem for us. Last year we were starting Jay Crocket at the three spot and we were able to match up better size wise. That’s why they just annihilated us on the boards. I’m impressed with them (Texas) and how physical and big they are.

With freshman F Justin Gray a bit limited with tendonitas in both knees and his minutes being limited, there really are not much, if any small forward options other than Gray. It is going to make having C.J. Williamson coming in next year be so advantageous for this team, to have two small forwards who can play.Gray did get the start in the second half and I think this means that Smith really is playin ga chess match each game to try to to maximize spacing on the floor versus size. Gray doesn't provide that spacing just yet offensively, although he will eventually.

2. Evans Was Terrific. I'm so excited for Evans and what I think he will be able to do with this team as one of the point guards that I think will be able to really start making a difference going forward and next year. Tubby Smith said after the game that Evans is really the only true point guard on this team and I don't think it is lost on him that this is the case:

"He is a true point guard unlike Rob (Robert). Ron is a converted guard trying to play point. Randy is the same way. Keenan is the only really true point guard we have in the system and you can tell. He’s got to get stronger but he was in there in the end. He was a difference maker down the stretch and able to cut it down to 7 (points). He was making outstanding plays and passes to Isiah. Penetrating and breaking people down. He made some heady and plus he’s making his free throws. He had a good all-around game. I thought he probably had the best game of anybody today."

It is no secret that the one thing that this team has lacked is excellent point guard play, especially this year. These freshmen are earning more and more playing time and confidence with the way they are competing.

3. Manderson Making a Name. Manderson, somewhat quietly, really played well in the second half of the non-conference schedule and he did the same thing yesterday as he led the team with 12 points in just 11 minutes of play.  And those 11 minutes came in what some might think was garbage time, the Red Raiders being down by 20 or 18 points, but Manderson didn't give in, not a bit.  And Manderson really didn't get his minutes until Odiase got into foul trouble and Smith was forced to continue to play a big man.  Manderson is really earning those minutes and he has to continue to use that big body of his to his advantage.

4. Who Had the Better Defense? Shooting percentage isn't always indicative of defense, but despite what seemed like a constant barage of blocked shots on Texas Tech players and 18 offensive rebounds, Texas Tech only allowed the Longhorns to make 38.5% of their shots, while Texas Tech shot 42.3%. Thus, despite the fact that the Longhorns had, theoretically, better and easier shots, by virtue of having players who are 6-9 through 6-11 on the front line and 18 offensive rebounds, blocking all sorts of shots against Texas Tech, the Red Raiders still held the Longhorns to less than 40% from the field.

5. Free Throws Strike Again. there's not a lot to this, but Texas Tech was just 13 of 26 from the free throw line, 50%. Texas Tech lost by 9 points today. You can do the math here. Not saying that Texas Tech needs to be 100%, but this team needs to be better than 50%. I'm looking right at Norense Odiase, who was 3 of 8 from the free throw line and this is really oth good and bad in that Odiase was very much continuing to pound the ball inside despite the huge front line for the Longhorns, but he has to help this team capitalize on those free throw opportunities.

No stats today from StatSheet.