Like yesterday, the conference realignment links are after the jump.

TEXAS TECH BASKETBALL
Gillispie adds another piece to staff - The Daily Toreador: Sports
This is a media relations type of role and Wells also works for the baseball team (I think).

Five Questions For... Iowa State Cyclones - Big 12 Hoops
Learn about one of the bad guys.

Big 12 Preview: Projections and five storylines to watch next year - The Dagger - NCAAB Blog - Yahoo! Sports
The Dagger is predicting a last place finish and I can't blame them.

CLEAR EYES FULL HEART - Unlikely Words - A blog of Boston, Providence, and the world
This is the video from the Emmy's on Monday.  Clear eyes.  Full Heart.  Can't Lose. 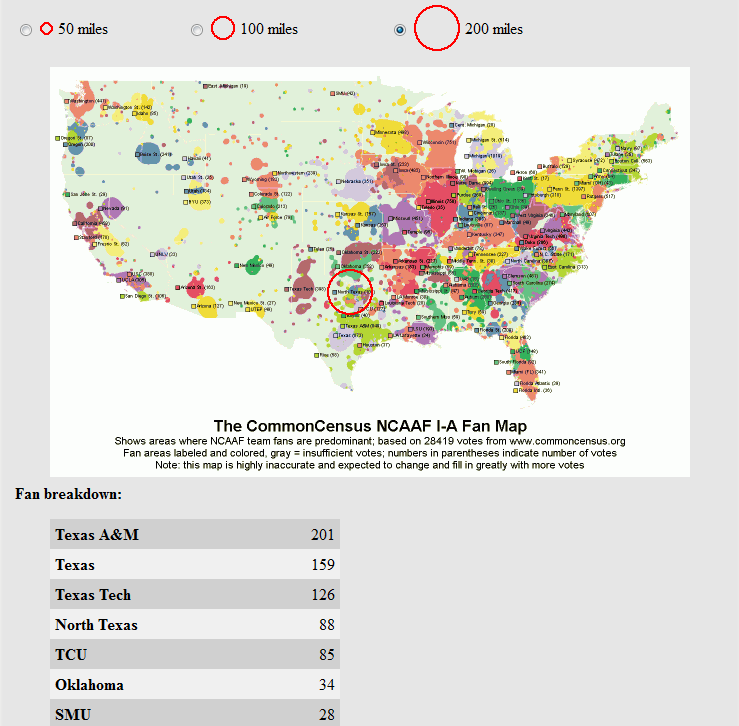 The Geography of College Football Fans (and Realignment Chaos) - NYTimes.com | CommonCensus Hotspot Sports Map
These were interesting links from yesterday and affirms that Texas Tech does in fact have football fans.  The study is based on the second link, which is a website vote as to whether or not they are fans and so the data has potential to be incredibly flawed.  I did the 200 mile radius for the DFW area and came up with the map to the right (full size here).  Overall, this means that, according to the numbers, Texas Tech has the #33 largest fanbase and would be the #4 fanbase if Texas Tech moved to the Pac-12 (although would then be behind UT and OU).

Texas And Conference Realignment: ACC Or Pac-12? | SportsGrid
All you need is this quote from the NY Times Pete Thamel:  "inviting Texas to your conference could be like inviting Hannibal Lecter to a dinner party."  Thamel also says that UT is like the prettiest girl in high school who can't get a date to the prom.

Orangebloods.com - Source: Texas will make decision within two weeks
So to contrast the SportsGrid link, here's this, from OB.com's Chip Brown who writes that Texas will drink all of your milkshakes:

The Longhorns' first option remains holding the Big 12 together with Oklahoma and Oklahoma State in it, the source said. The Big 12's TV partners (ABC/ESPN and Fox) are not interested in continuing their current contracts with the Big 12 if Oklahoma, Oklahoma State and Texas are not all in the league, sources said.

A second source confirmed to Orangebloods.com that the Atlantic Coast Conference remains interested in Texas - but without Texas Tech. The source said the ACC would consider a Texas-Kansas or Texas-Missouri combination. But the ACC has real concerns about Texas Tech's academic standing. (Tech was ranked No. 160 in the latest U.S. News and World report rankings of America's top colleges and universities.)

As we all know, conference realignment isn't about academics.

Trust, partnership has crumbled within Big 12 | NewsOK.com | Regents give Powers the OK to study Horns' path in conference realignment | Oklahoma, Texas put league fate in presidents' hands – USATODAY.com
The Board of Regents of OU and UT authorize their presidents to act, although UT's president is more restricted.

Know an honorable man running college sports? Give him a minute - NCAA Football - CBSSports.com
I posted this in yesterday's links, but it's still worth a read.

Twitter / @AJ_David: Despite OU, OSU and UT cal ...
The reason why Texas Tech doesn't have to call a Board of Regents meeting is that Texas Tech has already approved President Guy Bailey to act:

Despite OU, OSU and UT calling regents meetings, TTU does not need regent approval to explore realignment and have outside discussions.

Realignment’s Effect on the NCAA - The Blog of the NCAA
Another excellent read.

Report: West Virginia Declined by SEC - Big East Coast Bias | Report says Villanova’s bid rejected by ACC - delcotimes.com
Just because a school makes an application, it doesn't mean that it's going to be accepted to a conference.

Sprints Will Allow Clemson in Over Its Cold, Dead Body // 09.20.11 - Team Speed Kills
I couldn't link to every bit of news in the SEC and their expansion issues, so I'm linking to Team Speed Kills.

The Longhorns are not going to push the Pac-12 around. Scott and the conference presidents know plenty well what's happened in the previous two conferences they've been in, and they're not about to let Texas go and ruin their tidy little conference deal with their own impositions on revenue sharing. Texas will have to do it the Pac-12's way, which means folding the LHN up and moving back into the fold.

Big East And Big 12 Discuss Merger - Big East Coast Bias
I guess this is option #2 if UT wants to keep the Big 12 alive.