Pringles are for the wild

Dispatches from Kerrville Schreiner State Park: The Lord of the Flies is plausible.

Share All sharing options for: Pringles are for the wild

The men are reluctant to talk about it openly, but from what I can gather the first time was a disaster.

Sometimes when its really late and most have retired to their tents Keith and Steve will talk about the horrors in very vague terms. While nursing the night's final Rum & Coke they stare hollow-eyed into the glowing embers of the camp fire. It's cathartic for them to share their memories with each other, so I slink down in my chair hoping they forget I'm there.

In a barely audible whisper they recall the events of that first camping weekend eleven years ago. There was a terrible storm and they were forced to sleep inside their cars. Somehow they made it through the night but the next day was when it happened. One of the kids got hurt, but that wasn't the worst of it. There were table cloths.

Table cloths. On the picnic table. On a camping trip.

You see, the moms were invited to the first camping trip and they brought table cloths. They looked after the kids every second of the day and cleaned up the campsite constantly. They made the kids eat right and complained about the heat and the rain. So Keith and Steve made a decision: No more moms on the camping trip. It turned out to be a monumental choice.

By their account, last weekend was the 22nd trip. We go twice a year-- in late October and during the second weekend of Spring Break. There's a revolving list of dads and kids that have been a part of it. I've been 14 or 15 times I guess, but the two mainstays are Keith and Steve.

The trip is a glorious battle of wills and an attempt to maintain correct ratios. The battle boils down to a mess of kids that constantly want to go to the river and a few severely outnumbered dads who just want to sit in their chairs and drink beer.

Maintaining correct ratios is necessary as well. Kids to dads needs to be at least 3 to 1, but never more than 5 to 1. At 3 to 1 the moms are forced to stay at home and worry a little about the kids. We've learned through trial and error that a 3 to 1 ratio means they won't go out to fancy restaurants and spend a bunch of money at Macy's. I'm not a scientist so don't ask me why it works, but it does.

On the opposite end of the spectrum you never want to get over 5 to 1. That's really red-lining it and you're probably gonna lose at least one kid which would cast a pall over Sunday breakfast.

You also want to shoot for a 3 to 1 Pringles to donuts ratio because Pringles can be consumed throughout the day while donuts are for breakfast.

Beer to water is 6 to 1. Spaghetti-O's to jerky is even. Pork to anything else is 10 to 1. Kraken to good is hell yes. And the percentage of juice boxes/sodas/water that a kid opens and actually finishes is zero.

This year we had a perfect 3 to 1 kid/dad ratio with 18 Lord of the Flies applicants and six of us. 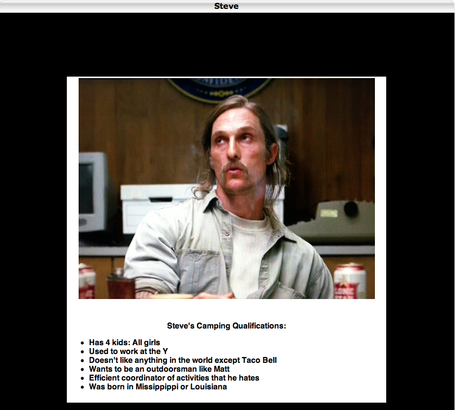 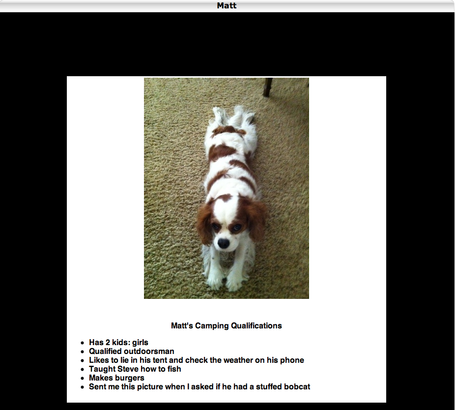 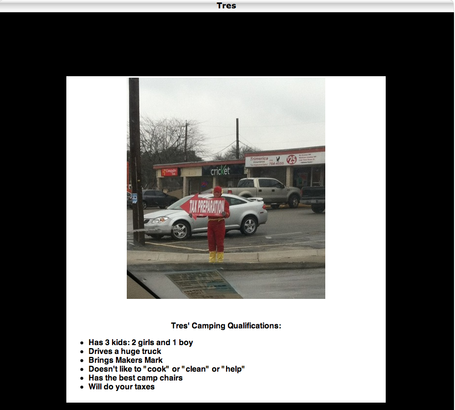 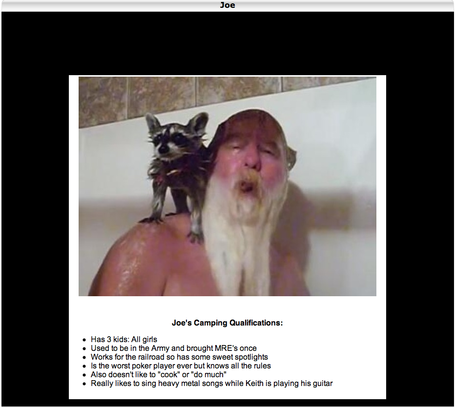 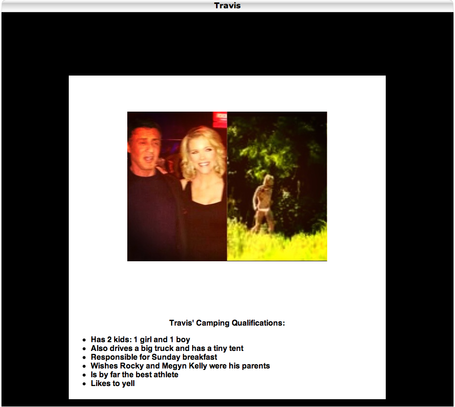 Tres and I have another kid each that isn't quite ready for camping yet and we always wind up bringing along a few extra kids, in case you're doing the math at home.

The rules are simple: Let the kids do whatever they want, eat whatever they want and climb as many trees as they want for two days as long as we take them home safely to their mamas. They're filthy with belly-aches, but they are returned home safe. They absolutely love it and look forward to the next one immediately after the last one ends. It's great for us too, although we don't get nearly as much seat time drinking beer as we'd like. We get lots of pork and Pringles and time with the kids. Our buddy Bill recently moved to Tennessee so the food isn't nearly as good as it used to be, but we manage.

We've settled into quite an active routine over the years. Friday afternoon is the river and Friday night is eat whatever you can find. Ravage the bins like little pirates you little pirates. Pringles are everywhere. It's as if they've never eaten chips from a can before. You can't imagine how many Pringles a kid can eat and how many juice boxes they can open but not drink. Saturday morning is a hike, then rest, then football, then the river, then a water balloon fight, then pork, s'mores and burning whatever they can in the fire. The younger kids recently discovered that ice doesn't burn but almost everything else does.

Sunday morning is a big breakfast and cleanup. Sometimes we have a little fishing tournament or sometimes we just head home. The experience is always highlighted by some of the odd groupings of sentences spoken by those in attendance.

My dad's pancakes are way better than this.

Is that a skunk?

Did you just throw up in the tent?

Is this bacon raw?

Young kid: What are you doing?

I found this hot sauce at a little market. It's in a water bottle. I think it was smuggled into the country. Let's eat it.

Did you just sneeze in the trail mix?

Please take your feet out of that peanut tin.

No, you can't sleep in a tree.

Did you pee on yourself?

Did you pee in the tent?

Did you pee in the cave?

Did you pee on that kid?

Don't ever tell your mom.

Y'all go stand way over there and see if you can catch these eggs from a sling shot.

My tummy hurts. I think I ate too many bugs.

Did you just push that kid into the river?

No you cannot get married because you're four.

Did you sneeze in the trail mix again?

What are you gonna do with all those bananas and chocolate and rum Bill?

Where are your pants?

Where are my pants?

Whose pants are these?

There's always a period of adjustment when we get home on Sunday afternoon. Mom is relieved to see us but her joy is quickly replaced by her disgust with the way we look and smell. She washes everything twice, including the kids.

The kids have a decompression period as they get used to nice soft things again like a couch and fresh underwear. It takes them a few hours to get used to "following directions" again and "listening" to instructions. Last Sunday was no different.

Mom got everyone and everything cleaned up and a few hours later we stood in the kitchen telling her stories from the weekend. We watched in puzzled amazement as she opened a can of Pringles and popped a few in her mouth while listening to our tales.

But of course we didn't partake. Pringles are for the wild.