Wanted to use this note to check out NM99's retrospective of the evolution of this current football team, Michael Lewis' look back at Mike Leach, 3 years after his very famous interview, and the NY Times profile on Graham Harrell. And just in case your curious, Lewis writes about a lot more than just sports, and has a really interesting piece on the the current economic crisis.

And make sure and check back at 10:00 a.m. for some recruiting thoughts on the quarterback and running back at Texas Tech. 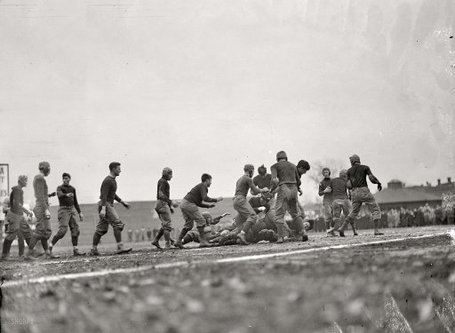 I just thought this was a cool photo, click here for the original size and check out the guy with the white bandages on his hand about to lay an absolute beat-down on someone.

Yahoo! Sports' Jason King has a lengthy profile on Michael Crabtree. This is really worth your time and I'll pull out a few quotes that I thought were pretty intriguing. When Leach was recruiting Crabtree, Leach would call often to check up on him:

Even though he committed to Texas Tech a few weeks before National Signing Day in 2006, Michael Crabtree continued to field calls from Mike Leach up until the morning he faxed in his letter of intent.

"He absolutely hated talking on the phone," Leach said. "He would always say, ‘Coach, I told you I was going to Tech. I don’t know why you keep calling. I enjoy talking to you, but we had a late practice today, so I’m going to bed. I’ll see you later.’

"It was always very abrupt. He’s not into these long, flowery conversations. He just focuses on football."

I also enjoyed this enchange:

A few weeks ago Michael Crabtree picked up his cell phone and called Deion Sanders and asked him if he ever used to dream.

Not about money or cars or women or fame, but about making plays and scoring touchdowns.

"I’d been doing that a lot," Crabtree said, "and I wanted to find out if it was normal. Deion said it was."

That’s why Crabtree wasn’t surprised when he made the game-winning catch with one second remaining in Texas Tech’s 38-33 victory over Texas on Oct. 25. He said he’d visualized the play countless times in his sleep.

Some snickered at Crabtree’s comments, but Leach believed every word.

"I bet he thought it through thousands of times," Leach said. "That’s the thing about Michael: He’s not doing this for a bunch of attention or trophies. Michael just loves football at a level that most players don’t."

I've never known what to think about Michael Crabtree other than he's just an incredible talent who I believe should leave for NFL next year. Before the 2007 football season I thought that Michael Crabtree was the 4th most indispensible player on the team, before even seeing him take a snap on the college level. I've always thought he was special and he's a pleasure to watch on the field.

I thank you Mr. Crabtree.

DT's Alex Ybarra believes that the Heisman Trophy is not far away from being in Graham Harrell's hands and talks with HeismanPundit.com's Chris Huston.

LAJ's Jeff Walker writes about Trevor Cook adding some weight during the offseason:

After playing most of last season at 215 pounds, the 6-foot-8 forward needed to bulk up. He got with Texas Tech strength and conditioning coach Chris Braden and developed an offseason workout plan that helped Cook get his weight as high as 247. Since fall practice began, he’s trimmed his weight down to 235, which is what he and the coaching staff believe will be an ideal playing weight for him this season.

I'm glad to hear that he's battling more, which means that he's under the boards grapling for rebounds. But perhaps the most important part of the article describes where Cook gave up his scholarship so that Tyree Graham, a late qualifier, could come on board at Texas Tech.

"I went to the staff and said early on that I’d be willing to give back the scholarship," Cook said. "Tyree had played with us a couple times and I knew he was good. He’s a true point guard, a pass-first type of player and that’s what we needed. So, I thought it was just doing what’s best for the team because he obviously makes the team better."

You get a loud round of applause from me Trevor.

DT's Alex Ybarra previews tonight's game against St. Francis (PA) and Junior Knight says that he's got 4 guards, all who can play:

"I have four guards that I really like with Alan (Voskuil), John, Tyree and Nick," Knight said. "I'll play three at a time, two at a time. You may even see us play four at a time if people are zoning us."