This is meant as a conversation starter, not the end all be all presentation of what coverages Tech runs. I plan on charting and drawing up the defensive coverages from a game at some point soon.

Most of the coverages I've drawn up are from the base 3-4 look to try to limit confusion. I have tried to color code everything and draw lines connecting the players and their coverage responsibilities. I understand it may still be complicated.

When you see that a defense is called cover and then a number, that number is referring to the number of deep coverage responsibilities. Cover 2, 3 and 4 are most common. In these coverages, the field is divided evenly between the players responsible for the coverage. Most of these coverages have both, a man and a zone coverage option, but I have included mostly zone looks with a max coverage, meaning there are the most number of defensive players dropping back into coverage. I have included a few blitzes, including our favorite, the ALL OUT.

Now you may ask, why call man over zone or vice versa. In man coverage, you can have tighter coverage on the receivers. The biggest drawback of man coverage is that you have to be confident that your coverage players are as good or better than the receivers. You'll see bigger plays in a missed man coverage assignment than in zone. Now, while zone may be easier to cover your deficiencies in talent, it's going to open up holes all over the field. Where those holes are will be determined by the coverage itself, the talent of the defender and the number of routes run through that zone.

For example, take a coverage that has 3 underneath zones like a cover 3 blitz or cover 4. You can take the middle linebacker to one side of his zone by running a receiver through it, settling on the left side. Then the offense can take another receiver and run it through the zone on the right (typically called a curl zone) and settle towards the sideline. Now, you can see that those two defenders have just opened a huge hole up the seam where NO ONE is. This is how you can defeat zone coverages and "find holes."

Now onto the coverages.

Probably the simplest to start with is a man coverage. Your two high safeties are responsible for the deep halves, everyone else has a man coverage responsibility, minus the Bandit; he blitzes. This is pretty simple and what the coverage looks like: 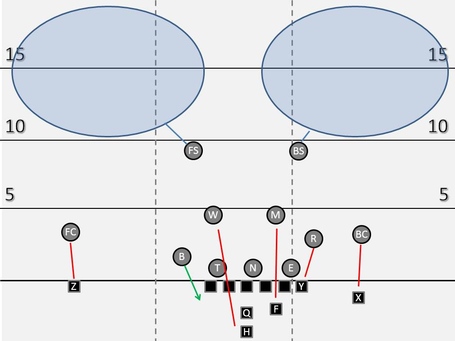 Here is the zone variant of Cover 2. 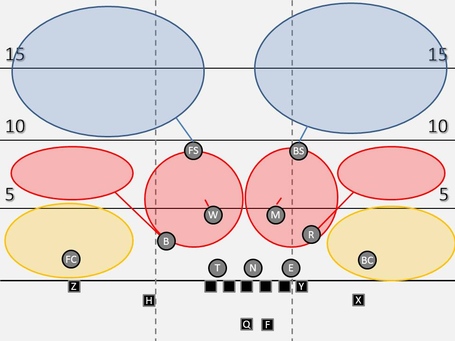 This coverage mixes cornerbacks and safeties dropping into coverage, each responsible for a deep third of the field. Cover 3 mostly has zone in front of it. Generally speaking, the closest defender to the zone is responsible, however if the defensive coordinator is trying to get cute and confuse the QB in his pre-snap reads, he could alter those responsibilities. 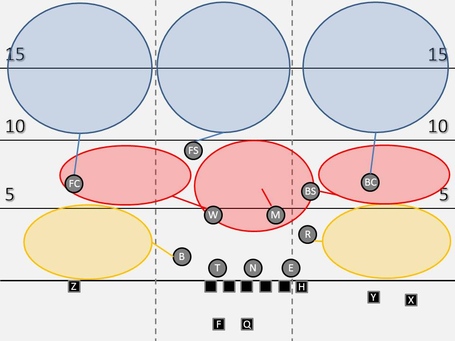 Here are a couple of our Cover 3 zone blitzes, including ALL OUT. The blitzing man can be anybody. If it is one of those generally responsible for a deep coverage (say the Boundary Corner above), then another player will float back and fill that coverage (like the Boundary Safety). If it's someone up front, you are basically sacrificing that zone. You will try to expand the other zones to make up for it, but the bigger the zone, the more likely it is to have a hole in it. 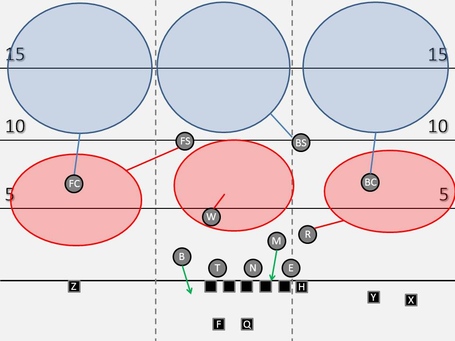 Comparing the blitz look to the max coverage look, you can see that when you're losing your coverage in the flats. This is usually going to be the first area to be dropped when you are blitzing because you are allowing them to throw shallow up front and letting your defense flow to the ball.

Here is an ALL OUT version of the blitz, simply leaving the 3 deep zones. We saw this against SMU in 2007 where Harrell called an audible, one of SMU LBs then started yelling "ALL OUT! ALL OUT! ALL OUT!" which was clearly audible on the broadcast. It didn't work because Harrell hit a quick route to Amendola who broke a tackle from one of the players responsible for a deep third and then just outran the rest. 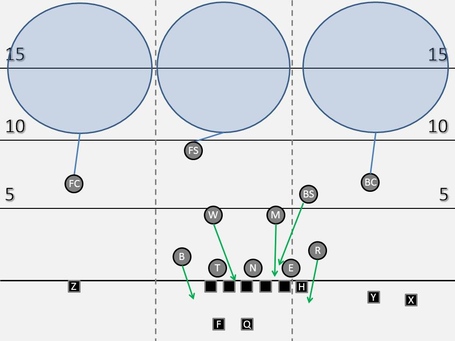 Cover 4 is typically your two CBs and two Safeties dropping to each cover a quarter of the field. This coverage is often referred to as "Quarters." This will often look a lot like man coverage because the CBs will carry the outside receivers deep, and will break on a shallow throw. In a 3-4 defense, you'll typically see Bandit blitzing to add to the pass rush. You'll see cover 4 against 2x2 formations and situations where you would expect a deep throw. Cover 4 is great against cover 4 verts deep, yet can be exposed with a quick throw up the seam. Your CBs are typically off the line to allow them to read and react better, while still being able to cover deep. 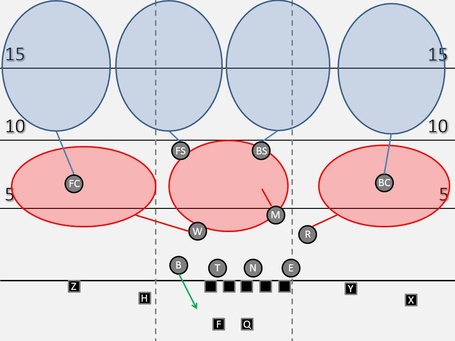 Cover 6 is a mixed coverage, with one half of the field being covered by 1 player (Cover 2) and the other being covered by 2 players (Cover 4). You can see how it got its name from a mix of Cover 2 and 4. This will usually be used against an unbalanced or trips formation where you need more coverage on one side of the field. Seth touched on this earlier in the spring before the Spring Game where he also told us how the defensive backs were labeled. 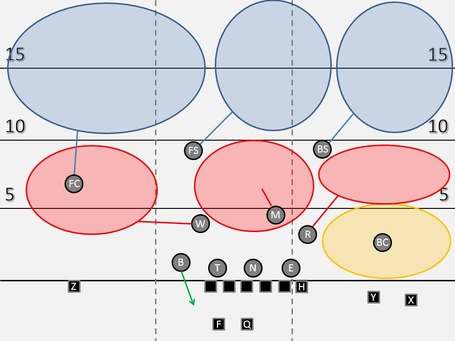 We'll look at a few specialty coverages that will come into the game in specific situations. Cover 0 and Cover 1 are used more towards the goal line because of the decreasing area of the field required to be covered and the defensive coordinators propensity to apply more pressure on the QB in this area of the field.

In this area of the field, you're going to see mostly man coverage with a deep safety in case of a blown coverage. This will be in the red zone. 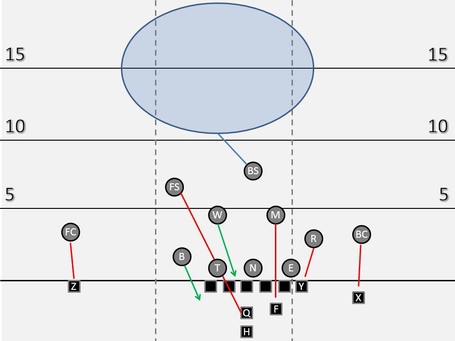 Cover 0 is a man blitz. This will be closest to the endzone where you really can't use a lot of zone because of the holes. It also will allow the defense to blitz and pressure the QB the most. 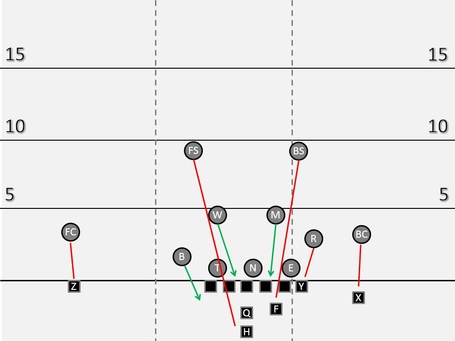