How Pat could actually win the Heisman...or get pretty close.

Patrick Mahomes will go into the 2016 season ranked anywhere from 13th to 16th on the list of preseason Heisman hopefuls, depending on which Las Vegas hotel’s sports book you visit. "On the radar" would be a good term to use for him.

While I’m not naive enough to think he should be a favorite to beat out the likes of Deshaun Watson (Clemson), Christian McCaffrey (Stanford) or Leonard Fournette (LSU), who all finished in the top six of Heisman voting last season, I do believe Mahomes can make some real noise and possibly be invited to the ceremony as one of the top candidates.

Mahomes avoided an offseason of baseball for the first time since being in Lubbock and Kliff Kingsbury told reporters at Big 12 Media Day, if his spring and summer carry over to the 2016 season that he will have "a very special year."

Here are all of the ingredients that he will need to cook up a flight to New York in December.

Numbers - Pat must have outrageous (perfect) numbers against non-conference opponents this season. Louisiana Tech and SFA will be early targets for large yardage, high touchdown volume games. For a reference point, RG3 had more touchdowns than incompletions during his non-conference schedule in 2011. The same stat accumulation needs to happen against middle and lower-tier conference opponents. Unlike last year, Mahomes will need huge games against the likes of Kansas, Iowa State and West Virginia. Running up the score be damned.

Oddshark.com notes the average stats of the past seven Heisman winning quarterbacks:

Mahomes was one of three power-5 quarterbacks (Luke Falk - Washington State, Jared Goff - Cal) to be ranked in the top five in completions, touchdowns and yards and didn’t sniff Heisman consideration.

Considering the natural progression of a quarterback going from his sophomore year to his junior year, we can easily assume his completion percentage will go up and his touchdown to interception ratio will improve. Speaking for myself, Pat can stay at the rushing yardage total he has last year if that keeps him healthy. As far as numbers go, Mahomes should be in the right company come ballot counting time.

Highlight Plays - To get an invite from the Heisman Trust, Pat will need a few highlight reel plays to garner attention and build momentum going into the last few weeks of the regular season.Think Reggie Bush against Fresno State, Eric Crouch throw back touchdown, or any Cam Newton run during the SEC season. Last year’s bowl game shows how capable he is of making a ridiculous play and creating highlights for a lifetime. This should be no problem.

Big moment - It doesn’t have to be a miraculous play, but a game-winning drive or play ALWAYS helps, even if Tech is supposed to win the game. Sustaining a long drive to ice the clock or setting up a game-winning field goal to escape with a win against a good opponent goes a long way. Manti Te’o basically built his Heisman resume solely on making clutch plays at the end of Fighting Irish wins. Sam Bradford had this gem to help OU win a game against Oklahoma State.

That being said, a game-winning Hail Mary or a go-ahead diving touchdown to beat OU or TCU would go a long way to getting his name in the top-5. Graham and Crabtree pretty much solidified their top-5 spots with that one TD against UT.

Games on national tv - Exposure is HUGE for Heisman winners/candidates. It’s not the be-all end-all, but it definitely helps in the eyes of the voters that wouldn't see a lot of Tech football if it weren't for the big stage games. Tech has two games early on Fox sports 1 and a Friday date with Baylor after Thanksgiving on ESPN. Even though most of the schedule is TBA, we can assume if Pat is having a great year and Tech is winning, games against OU, Texas, TCU and Oklahoma State will be on national television.

Starting under the radar - Being the favorite in the Heisman race isn’t always a great spot to be. Marcus Mariota essentially went wire to wire, but since the turn of the century, there have been many out-of-nowhere winners. No one knew the name of Johnny Manziel before he wrecked the SEC his freshman year. Jameis Winston was highly touted, but not highly considered in the preseason before he led the Seminoles to the National Championship.

Mahomes begins the season with 30/1 odds. Not a favorite, but definitely in a good spot to make some noise.

Texas Tech support - Along with exposure from games, it wouldn’t hurt Tech, it’s T-shirt shops and Under Armour to drum up a little publicity if Mahomes gets off to a fantastic start. Not saying they have to go all "Joey Harrington" on everyone, but every little bit helps. During Graham Harrell and Michael Crabtree’s magical 2008 season, there were shirts that said "5+6=7" and "He-i5-man." I’m sure someone can come up with something catchy for Pat.

Dominate the Region - Voting for the Heisman is broken up into six regions. Texas Tech (along with the rest of the Big 12, except Iowa State and West Virginia) is squarely in the Southwest Region. Mahomes will be fighting Semaje Perine, Baker Mayfield, Seth Russell, Leonard Fournette, and Myles Garrett for votes in his own region. This might be the toughest task for Mahomes to overcome. 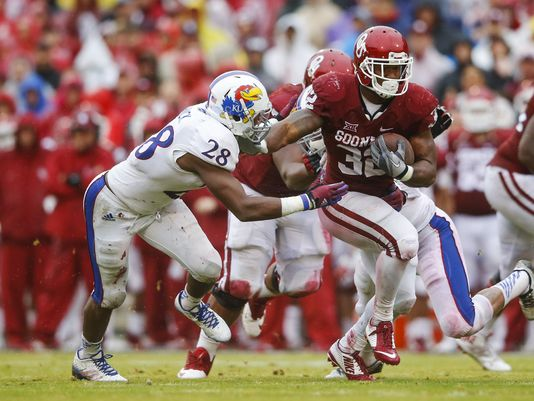 Shake the stigma - Mahomes is going to have to make himself more than just a passer to win the Heisman. Throwing for four thousand plus yards isn’t going to get it done. Mahomes will have to make plays and score with his legs to help his case. Winston and Bradford are the only quarterbacks in the last decade to win the award while rushing for less than 250 yards. To compare, Harrell threw for 5,100 yards and 45 touchdowns in 2008 and was a distant 4th. I’m not exactly sure how he can shake the national stigma that Tech quarterbacks are just compiling empty yards and touchdowns, but if he can, it will be a huge step in the right direction.

Be in the national championship hunt - Other than big numbers and big plays, this might be the MOST important factor for winning the Heisman. Since 2000, Manziel and RG3 were the only two winners that weren’t in the hunt to win the title or at least get to the CFB playoff. Being the best player on the best team is crucial to winning or even competing for the trophy. Derrick Henry, Mark Ingram, Troy Smith and Jason White are all examples of guys that were in the Heisman conversation and were aided by their team being in the title hunt all year. Winning the Big 12 would be a huge start.

Stay Healthy - This almost doesn’t need to be said, but he won’t even be in the conversation if he misses due to injury. Heisman hopefuls plummet considerably if they miss even a game or two.

With a lot of stiff competition this year, Pat will have a steep hill to climb to win the Heisman, but it will be a fun season watching him go for it. I feel like Pat could strike a pretty solid Heisman pose. Also, if there is a lot of money to be had in the "Pat Ma-Heisman" marketing world, I've trademarked and copyrighted it, so don't even think about taking my fortune.