The Texas Tech Red Raiders took the game to the wire, but couldn't pull off the upset, losing to Baylor 54-49. We've got five thoughts on a terrific basketball game, stats, and highlights.

I loved watching that type of basketball. It's not always pretty, but I love being encouraged by this team and that was a heck of an encouraging game as Texas Tech lost to the Baylor Bears, 54-49. 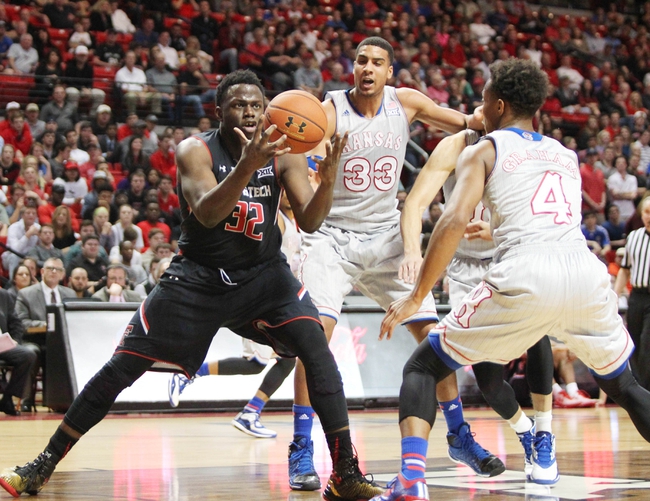 F Zach Smith. This certainly could have gone to Norense Odiase or Devaugntah Williams, but Zach Smith broke the freshman record for blocks in a season, previously held by Will Felmmons. Smith finished with 10 points 3 rebounds, 2 assists, 3 steaks and 2 blocks along with zero turnovers.

1. Loved the Play. I just loved how the team played, they were scrappy on defense, having a tough time stopping Baylor in the first half, in particular Taurean Prince, but Texas Tech held Baylor to 25% shooting in the first half and 18% from the three-point line. The offense flowed much better and at the very least, the team was consistent through both halves, shooting 35% in the first half and 36% in the second half. Young teams just have a difficult time putting it all together and this is still a young team despite almost an entire year under it's collective belt.

2. Free Throws. I mentioned last game that Zach Smith shot the only free throws, going 2 for 3, and last night, that wasn't an issue, as a handful of players made and shot free throws, but Zach Smith was 1 of 6 from the free throw line for the game. A usually reliable freshman, this wasn't Smith's best effort at the line, but Smith has been so good this year and the most consistent player. Smith is usually the guy that gets the most minutes and that happened again as he and Toddrick Gotcher each played 34 minutes. I think if Smith could do it all over again, he'd love to have those 5 misses back and I think we're talking about a different outcome.

3. The Paint. Texas Tech was out-rebounded by 10 rebounds in the game, but it was Texas Tech that absolutely dominated inside, scoring 22 points in the paint to Baylor's 12. A large part of that was some real nifty passing from Williams and some of the other players to find holes in the Baylor defense. A large part of it was Odiase, who looked really nimble on offense.

4. A Better Offense. Despite Baylor playing a zone for the entire game, the offense was significantly better, it flowed better. Much better than against Texas and I think that a large part of it was the fact the guards did a much better job of poking and prodding the perimeter of the defense and it helped a ton that Smith was able to hit some mid-range shots that ended up making things difficult for Baylor to guard Texas Tech. It helps a ton to have a guy that is hitting from the perimeter and Devaugntah Williams was good enough, going 5 of 10 from the field including 3 of 8 from the three-point line. The problem for Texas Tech is that the rest of the team went 2 of 16, which isn't going to get it done.

5. Miscellaneous Thoughts. Keenan Evans is having a rough go at it offensively right now, but he's playing really terrific defense, blocking two shots and his overall play has been good. The team had 10 turnovers and 9 assists and as you might recall, against Texas, the Red Raiders had a low number of turnovers. That's a positive for this team. It was also good to see Isaiah Manderson get some time after missing the Texas game. He looked a bit lost, but I still like seeing him minutes, even if it isn't all that much. Toddrick Gotcher is playing a ton now that Randy Onwuasor isn't getting as much time. He goes unnoticed a lot, but he's playing pretty well now that he's starting. Not perfect, but I do like his overall game.