the Red Raiders kept it close for the better part of the game, but couldn't keep pace or stop the Longhorns' Myles Turner.

Texas Tech loses to the Texas Longhorns, 56-41, in Austin on Saturday night. The Red Raiders played really well to start the game, but found themselves down by 10 at the end of the half and never let the game get away from them until the end (it was 47-41 with 5 minutes left in the game), where the score is a bit worse than it appears. 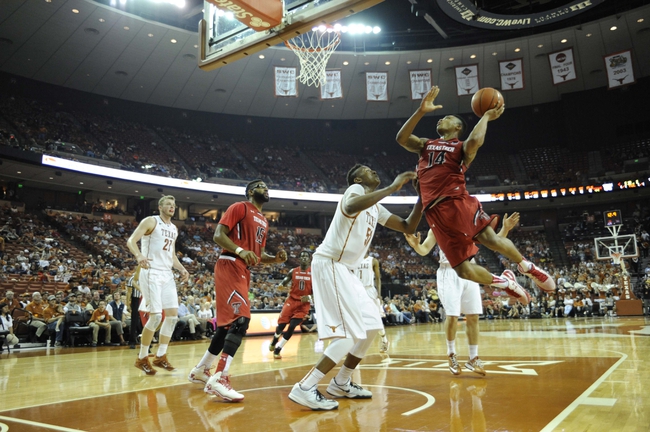 C Norense Odiase. Only Robert Turner scored in double-digits, but I did like Odiase's game even though he only shot 5 times, making 3 of those shots, for 6 points, 6 rebounds, 4 assists, 1 turnover and 2 blocks. Odiase's mid-range game is starting to come around a bit.

1. Tough to Beat Any Zone. Texas employed a zone defense for nearly all of the game and Texas Tech doesn't have the shooters to be able to force a team out of a zone. That's been the problem for the past two years with Tubby Smith's teams, which is the lack of outside shooting. Don't get me wrong, I think it is being addressed and should be better next year with Keenan Evans and Devaugntah Williams returning, but this team has lacked consistent outside shooting. A team like Texas can sit back in a zone and just gobble up the misses without much concern for anything else.

2. Assists to Turnovers. I can't recall the last time that Texas Tech had more assists that turnovers, but it happened last night. I don't think I would have guessed that going into the game, but sure enough, Texas Tech had 12 assists to just 9 turnovers, which is ridiculously low for this team. It's amazing what can happen when a team doesn't turn the ball over and as mentioned above, this was a 6 point game with 5 minutes left in the game.

3. No Bench. With Randy Onwuasor suspended for the last game and getting only 3 minutes last night, you realize how incredibly tin the bench is at this point of the season. The aforementioned Evans came in to get 19 minutes and Aaron Ross had 17, but those are the only two bench players. Also missing last night . . . Isaiah Manderson, who I think was on the bench, but just never played. Part of the reason why Texas Tech fades in the second half is the lack of depth and it showed last night.

4. No Answer for Turner. Just in case you were curious, Myles Turner is pretty good and he's incredibly versatile, hitting all sorts of shots. Texas Tech didn't have an answer for him defensively, Odiase isn't quite quick enough and Smith isn't big enough. Turner scored 25 points and was the only Longhorn in double-figures. The only good news is that he is projected as a top ten pick in next year's NBA draft.

5. Three Free Throws. Well, at least Texas Tech hit 67% of their free throws. The only problem is that the Red Raiders only attempted three free throws for the entire game. All of them by Zach Smith. Texas Tech was a jump shooting team for the entire game and that's not going to get it done. There were a few shots inside, but Texas dominated the points in the paint, 24 to 12. Texas Tech had a few opportunities inside where it wasn't called, but I didn't think that Texas Tech was aggressive enough. It is never easy going up against that Texas frontline, but three free throws isn't good enough.