Did the Big XII make a mistake by inviting TCU to join?

We all remember how cloudy things got a few years ago as teams scrambled to find a home and the major conferences realigned. After losing four schools, the Big XII added two. Only one made geographic sense, but looking back now, was TCU the right choice?

Share All sharing options for: Did the Big XII make a mistake by inviting TCU to join?

Every college athletics program goes through cycles. Teams that enjoy a decade of winning can slide and have a few down years. Sometimes it's the coach, sometimes it's talent shortage and sometimes it's a combination of both.

But sometimes it's stepping into a situation that the program is not well equipped for. Is that the case with the TCU Horned Frogs?

Gary Patterson is doing his best to convince TCU fans that the former is to blame for their struggles since joining the Big XII. In a recent article posted by CBSDFW.com he addressed the speculation that TCU wasn't prepared for the grind.

Patterson said he is familiar with some of the whispers that TCU is not equipped to handle Big 12 play but doesn't agree with it based on one season where the team went 2-7 in the conference and missed a bowl game for only the second time in his 16 years.

"I don't think people understand how many young players we had. We had seven seniors that played. We won the Rose Bowl with 27," said Patterson.

TCU was a member of the Mountain West Conference from 2005 until 2011. During that time the football program posted an impressive 48-7 conference record and won the conference championship four times.

In it's first two seasons in the Big XII, TCU has managed only six conference wins against 12 losses. To add insult to injury, many expected TCU to compete for the Big XII title in 2013 (even with seven seniors), but Gary Patterson's led Horned Frogs finished the season 4-8 and 2-7 in the conference.

You can count me as one that thought TCU would be able to make a seamless transition from the Mountain West to the Big XII. Of course there would be a step up in competition, but TCU seemed to be ready for the challenge.

After all, they had been impressive in one-off situations, including huge performances in BCS games. They looked particularly impressive in their big Rose Bowl win over Wisconsin. But the week to week grind of playing against teams bigger, stronger and faster is glaringly obvious. Perhaps Patterson can get them there at some point, but as of now TCU is unable to consistently compete.

And Patterson should be aware of the "whispers"  since he and linebacker Marcus Mallet seemed to admit to the possibility that the program wasn't ready in a WFAA.com story last October.

"I knew the level of competition on a week-in and week-out basis," Patterson said. "We'd played all of them. I think that's the biggest thing. If you didn't pay attention to what you were getting into before you got into it, then you're in a lot of trouble."

It didn't take long for the Horned Frogs to discover that the Big 12 is no Mountain West. In the 12 conference games they've played so far, their record is 5-7.

Players have learned that you can't take a day off in the Big 12.

"It's the physicalness," says TCU linebacker Marcus Mallet. "Everyone in the Big 12 is bigger than what they were in the Mountain West.

Sure, football is the cash cow, but what about the other sports? The men's basketball team has won 2 conference games since joining the Big XII.

Women's basketball has fared better posting a 7-23 conference record over the past two seasons, with 5 of those wins coming this season.

How about TCU Baseball? Along with the football program, the Frog's baseball team experienced several years of success in both Conference USA and the Mountain West Conference, including 9 appearances in the NCAA tournament and 1 trip to the NCAA World Series in 2010.

But in it's first year in the Big XII the baseball team finished 6th with a 12-12 record. As of this writing, the team is 2-0 in 2014. I am of the opinion that the baseball program is TCU's only legitimate shot at being competitive in the conference in the near term among the major sports. 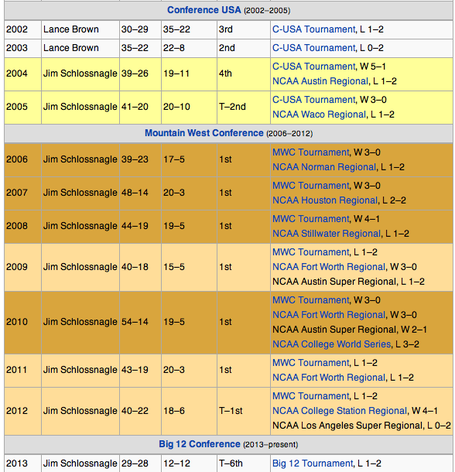 To TCU's credit, they really wanted to be a Big XII member and worked hard to get their invitation.

But the Louisville Cardinals really wanted to join the Big XII at the time as well. Here's a story from our friends at Barking Carnival the day after Louisville won the National Championship in basketball last season. The author summed up the situation nicely:

The Louisville Cardinals won the NCAA Men's Basketball Tournament last night. The Cardinals are in their last season as a Big East member, and will head to the ACC presently. It's an open secret that Louisville strongly campaigned for a Big 12 invite, and were told "thanks, but no thanks...for now." OK, then.

In summary, the Big 12 really has no desire for a school that has a profit-generating athletics department, stable and burgeoning revenue sports (to speak nothing of itsdecent non-revenue programs), highly regarded coaches, and passionate alumni base. Who needs wins and dollars, anyway?

So imagine a Big XII conference with a national power in basketball and a perennial contender in football. A program that generates a ton of revenue and has a recognizable brand.

How did this opportunity pass us by, you ask?

By all accounts Del Conte is an impressive man, and typically gets what he wants. In a recent story from CBSSports.com, Dennis Dodd details how hard Del Conte was working to get onto the Big XII's radar. But no matter how hard he worked, he knew in order to have a shot, he'd have to get to Dodds.

It was a quite a visit. Del Conte grabbed a car, a driver and a bunch of reference material, binders, extolling the advantages of TCU and Fort Worth.

"I get up at 8 o'clock in the morning and drive to Darrell K. Royal Stadium. I get to [Dodds'] office. Nine comes around, 10 comes around. I've got a GA [graduate assistant] outside waiting for me, by the way. I tell him, ‘Just wait 10 minutes I'll be back.' Pretty soon it's 3:30.

"[DeLoss] comes out and says, ‘Who are you?' Chris Del Conte, Texas Christian U. He doesn't hear ‘Chris.' he hears ‘Del'. ‘Del, let's go get ourselves a drink and discuss it.'

"We went to a restaurant and had a little libation at 3:30. By the time 8:30 rolls around, we were [into it] pretty good but we got ourselves in a situation. I kept trying to give him my [binders]. He said, ‘I've heard enough, Del' and just walked away."

The next day the Big XII A.D.'s held a conference call where it was decided TCU would be invited to join. TCU fans rejoiced, but perhaps the euphoria has faded. 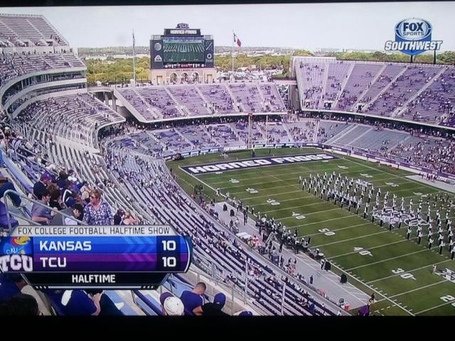 So what I gather based on this information is that DeLoss Dodds wasn't concerned about binders of information and revenue numbers that would support inviting TCU over Louisville (or any other school for that matter), but rather how well Chris Del Conte could hold his whiskey.

One can't help but wonder if Kentucky bourbon on the rocks was the drink of choice that fateful afternoon.