Our fair city has a growing interest in the art of brewing beer.

I love beer. Everything about it is interesting to me, which is why I've taken up the hobby of homebrewing. Sure, there have probably been more failures than successes, but that just makes you appreciate it even more.

Beer snob? Not at all. I always have light beer on hand, especially in the summer. There's just something about it when you're grilling or watching football. There's a time for light beer just as there is a time for an Oaked Arrogant Bastard. 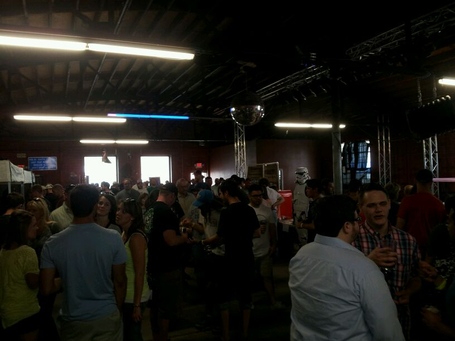 Thanks to events like the Texas Blues and Brews Festival and brewing classes hosted by SoGrate BBQ and Brew, Lubbock seems to have a growing interest in the art of brewing beer.

I wanted to highlight some of the activities of these guys and give others a chance to support their local brewer.

Still the only brewhouse/restaurant in town, Triple J’s has a lot to offer: atmosphere, great food, depot district location, and a wide variety of constantly changing beer selections.

I was able to try their Double Tongue IPA this weekend. Wow! This one packs a punch. It clocks in at 92 on the IBU scale, so prepare yourself accordingly.

The Wicked Beaver guys really started to get going about two years ago. Unfortunately, and I hate to say it, their first batches of beer really had some off flavors. However, they hired a new brewer a few months ago who I believe will really improve the quality of their brews.

They usually only provide tours when requested, but they just announced a tour and tasting scheduled for Saturday, June 29th from 5pm-7pm. Five bucks will get you in the door and $10 will get you a pint glass. They will be unveiling their latest: Hoperation IPA.

There will be food provided by SoGrate BBQ and Brew, a great place for BBQ/brewing supplies and beef jerkey (I highly recommend the Baconstein bacon jerkey!). SoGrate will also be hosting a brewing class this Saturday, June 29th starting at 11am. So, if you're around Lubbock and interested in beer, Saturday could be a packed day!

You can find Wicked Beaver beer on tap at The Lantern and in United Supermarkets throughout Lubbock. Check their website for other locations across Texas.

I was able to visit Yellow House recently to pick up some homebrew supplies and got to chat with the owners for a bit. If you ever have a minute and feel like sampling some craft beer (they had about 10 on tap, including their Down the Hatch Green Chile Ale), you might stop by. It's not a bar by any means, and it is geared more towards selling merchandise and brewing supplies, so keep that in mind. Maybe buy a t-shirt or pint glass while you're there if you're not into homebrewing.

It's located in an old cotton seed storage warehouse next to the railroad along highway 84 off of North University. They plan on expanding and selling in-house within the next year. The owner is a teacher who decided to quit teaching and make his beer brewing a full-time venture. He and his son traveled to Germany and studied to become bonafide brewmasters. It definitely shows in their product. I can't wait for these guys to get running full steam ahead.

I’ve never been to the Big Texan, but hear me out! Lubbock had their second annual Texas Blues & Brews Festival last month which showcases handcrafted beer from local brewers both big and small. The Big Texan guys were there, and their beer was fantastic. I think I managed to try every one they brought with them from the Panhandle: Jack Rabbit Red, Palo Duro Pale Ale, Pecan Porter, Whiskey Barrel Stout, etc.

If anyone in Amarillo has been to the Big Texan and had some of their beer, I would love to hear about it. Sampling it at the festival was enough to make the wife and I consider taking a trip to Amarillo sometime this summer.