VTM's attempt to make the world a better place without LeBron James.

We are trying to construct this weeks mail bag segment while watching the guy in mom jeans walking across the Grand Canyon so if the article abruptly stops, you know something really really bad happened.

We only got a few questions last week, so let's get right to HE'S AT THE THREE QUARTER MARK C'MON SKYWIRE DUDE DON'T FALL IN FRONT OF MY WHOLE FAMILY BECAUSE WE MADE POPCORN

Question from OH SHIT HIS POLE IS REALLY STARTING TO MOVE AND HE HAD TO SQUAT OK HE'S BETTER NOW Nea: Serious question. How many more years will Bill Snyder coach?

D. He'll coach his team and run across the field every play to help coach your team against his team beginning in 2015 and you will still somehow lose because Snyder is a wiTHE SKYWIRE GUY IS RUNNING ON THE WIRE OMG THE WIND IS BLOWING OMG AND WOULD SOMEBODY GIVE HIM A BOTTLE OF WATER OMG HE THANKED JESUS AND THE DISCOVERY CHANNEL AND NOW HE JUST WANTS A STEAK HE MADE IT HE MADE OMG IT HE MADE IT HE WAS RUNNING ON THE WIRE LIKE FREAKIN PRIME TIME RETURNING A PUNT IN ATLANTA THAT WAS BAD ASS

Question from Craig: When the new scoreboard is complete are we going to be inundated with ads during timeouts or is Tech going to use this awesome asset to enhance the already great atmosphere at home games?

VTM Mailbag: Another great question. Seth and I emailed Michael Molina, in Facilities Planning and he directed us to Blayne Beal. I sent the question to Blayne, but he hasn't responded yet. If he does, I'll be sure to pass it on. I would assume that ads will be a large part of the content as each second of an ad means more revenue to the University. I do agree that there should be some OH THAT'S NOT HIS MOM IT IS HIS WIFE THANK GOODNESS BECAUSE I WOULD FEEL SO BAD IF THAT WAS HIS MOM AND I WAS LOOKING AT ALL THAT WHILE HE WAS OUT THERE WALKING ACROSS THE GRAND CANYON AND I DON'T KNOW WHY MY FAMILY TOLD ME THAT BUT IT'S OBVIOUS THEY NEED TO DO RESEARCH BEFORE GETTING ME ALL CONFUSED BUT WAIT HIS MOM IS THERE TOO SO I DON'T EVEN KNOW WHERE I STAND ON THIS ANYMORE

Question from Michael: How would the Big 12 be cast in an episode of Seinfeld? Would TCU be Watley? Could Baylor be the Virgin?

VTM Mailbag: This is a tough one. Instead of running down the entire Big 12, I thought I'd just hit on a few highlights.

Texas Tech 2010-2012: Cast as Puddy. Monotone and boring as hell but good with the high fives at fundraising dinners.

Texas Tech in 2013: Ironically, we've come full circle and are now cast as Newman. Everybody hates us (except Kramer) which is just where we want to be. We also like to steal jambalaya from A&M.

And in supporting roles:

Baylor is cast as Elaine because, stereotypically, they can't dance worth a shit. OSU is Mickey and UT is the ASSMAN because everybody in town loves the ASSMAN even in Spanish with his vanity plates and all the NAKED AND AFRAID SURVIVOR IS ON RIGHT NOW ON DISCOVERY CHANNEL AND THIS HAS TO BE THE BEST REALITY SHOW I EVER SAW BUT IT WON'T BE LONG UNTIL WE JUST START FILMING PEOPLE SHOOTING EACH OTHER IN THE FACE AND PUTTING IT ON CBS PRIME TIME AND HOLY SHIT DID YOU SEE THAT GUY'S FOOT AFTER THE SNAKE BIT HIM? I DON'T WANT TO POST THE ACTUAL PICTURE IN CASE YOU'RE EATING BREAKFAST BUT YOU SHOULD GOOGLE IT. HERE'S WHAT IT LOOKS LIKE WHEN I COVER THE BAD PART OF THE TV UP WITH A KIDS BOOK: 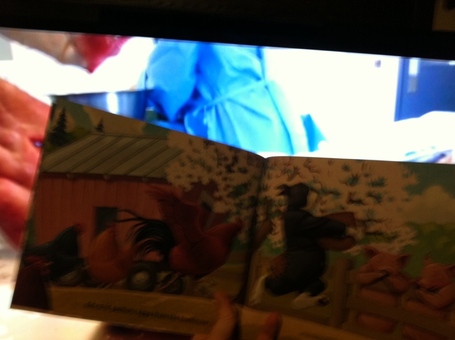 Our final question tonight comes from Mr. Henri L. Zongo: This message might meet you in utmost surprise. However, it's just the urgent need for a foreign partner that made me to contact you for this transaction. I am Mr Henri L Zongo from Burkina Faso in west Africa. I got your e-mail contacts from website after my extensive search for capable person. I prayed and meditated fervently over it and i committed it into the hands of almighty that you should be the rightful person to help out before I made up my mind to contact you today.

I have the opportunity of transferring the left over fund sum of US$29.500 Million dollars into a foreign account and the said fund belongs to our deceased client. Hence, I am inviting you for a business deal where this money can be shared between us in the ratio of 60/40 if you agree to my business proposal.

Further details of the transfer will be forwarded to you as soon as I receive your return mail.

VTM Mailbag: Oh hell yeah, we've been waiting for you Mr. Zongo! We'll be in contact right away. Sorry about your deceased client but I'll contact you today and we'll make the transfer. I really don't understand how this makes any sense though. You have a deceased client so you want to transfer me 40% of 29.500 million dollars? I don't even know how much that is but can you also send some albino tigers? I'll take that in lieu of say $2 million? Sound good Mr. Zongo? Lets make this happen Mr. Zongo. Again, my sympathies.

So that's it for the mailbag this week. If you have questions you can email me at SARRMAILBAG AT YAHOO DOT COM. (I don't want to list the actual address because I can only handle so many Mr. Zongos. I don't have enough room for more albino tigers and all my taxes will go up if I keep taking a 40% cut of 29.500 million).

If you ask me a question on Twitter, make sure to use lots of hash tags because that's what the kids do.