Wikipedia is killing VTM: A website run by volunteers

I hope you feel good about yourself Wikipedia. All we ever wanted was to become a reputable website and in order to do that we had to be on Wikipedia. I guess we'll tell our children that realizing your dream isn't possible in America anymore.

Welp. I guess that's it. The powers that be at Wikipedia have decided that our little website isn't good enough for the majesty and seriousness that is discussed on a daily basis at Wikipedia. They had a guy named "CutOffTies" send me notice like a hitman. I bet he's 17 and still wets the bed.

Surely it's only a coincidence that I sent this tweet today:

I mean there's no way it could be anything other than a coincidence because when you're dealing with CutOffTies, it's all professional, all the time. All that guy does is shoot people in the head, like creepy Todd. Nothing personal at all.

The Decline of Wikipedia article had some very interesting tidbits though, including:

The main source of those problems is not mysterious. The loose collective running the site today, estimated to be 90 percent male, operates a crushing bureaucracy with an often abrasive atmosphere that deters newcomers who might increase participation in Wikipedia and broaden its coverage.

Since 2007, when the new controls began to bite, the likelihood of a new participant's edit being immediately deleted has steadily climbed.

Unsurprisingly, the data also indicate that well-intentioned newcomers are far less likely to still be editing Wikipedia two months after their first try.

And we're just about two months into our Wiki experience and we were certainly well-intentioned.

So that's it fellas. Pour one out for our Wiki page tonight, because it's about to be dead. I updated my home page on Wiki so I'll probably be in jail soon. (click the picture for a larger version)

If you want to take a trip down memory lane, here is a history of our battle with Wikipedia. We fought valiantly, but the Wiki man is too strong.

Many thanks to VTMer hawkspur for cleaning up our original effort on Wikipedia and making it more palatable for the Wiki Man. However, our page is still likely to get deleted. So just in case, I'm documenting everything here for posterity.

Here was my original submission. The cleaned up version is much more professional, but this submission had some very important facts that had to be removed to please the Wiki Man. 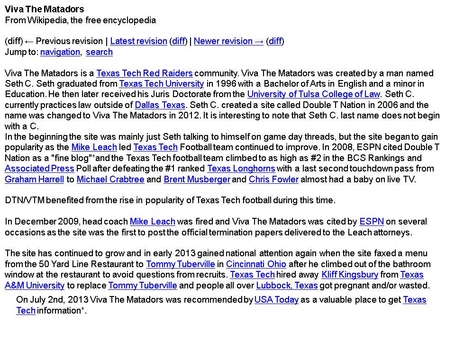 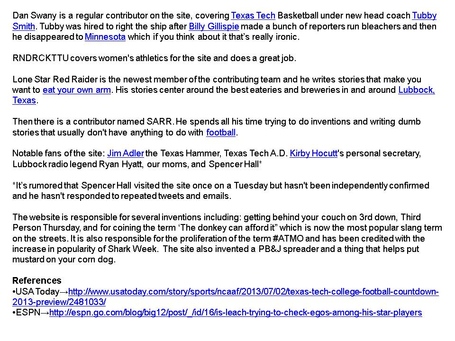 You can see larger versions here and here

We paid homage to some very famous readers and mentioned all the things we've invented and how we've changed society for the better. We also pointed out that everybody in Lubbock got pregnant and/or wasted the night that Kliff was hired and I'd like to see the Wiki Man prove that is inaccurate.

Feeling a little frustrated last night after getting hit in the face with all the Wiki flags, I had a few beers and tried to start a Twitter war. Its my theory that Toby went to work for Wiki after The Office went off the air and he's just out to bust your balls like always.

No response. So I went after Spanish Wiki.

So I decided if the Wiki Man is going to kill all our dreams about being on Wikipedia, we'll just have to start our own version. Fun Wiki is an available web domain name so as soon as I round up $299 we'll be ready to launch.

We'll model FunWiki after gazoodle, (hat tip TTUSOL14) which is the fun version of google. For example, when you gazoodle "Viva The Matadors" this is what you get: 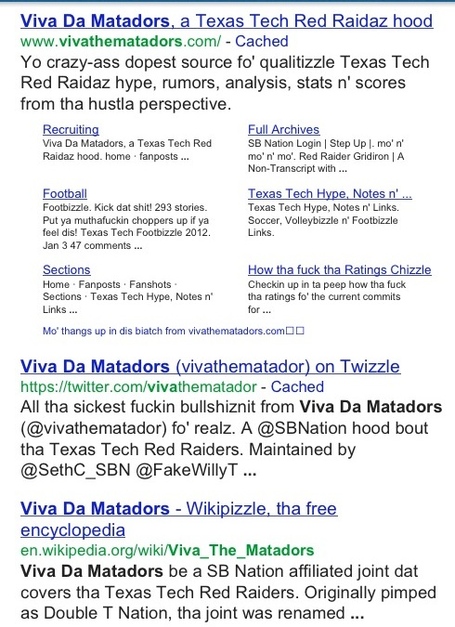 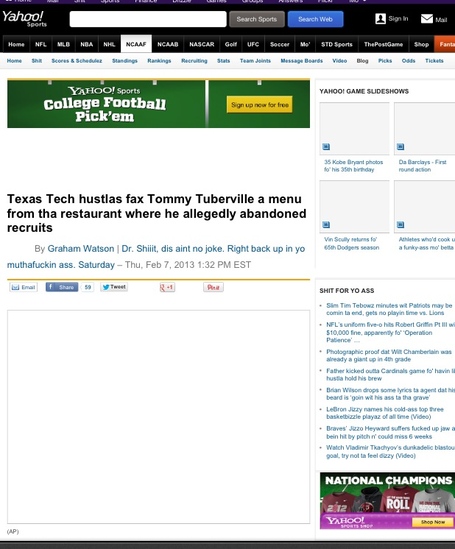 If you have a minute, check out our page on Wikipizzle. It's charming.

We'll keep fighting to keep our young Wiki page alive, but if they come in and kill our dreams, we've got options.

And we know where to find Benjamin Franklin and a cannon, Wiki Man.

You can see that we tried. We even set up an online petition and those things always work. But not this time.

This is our Felina. Wiki was our baby blue and they killed us.