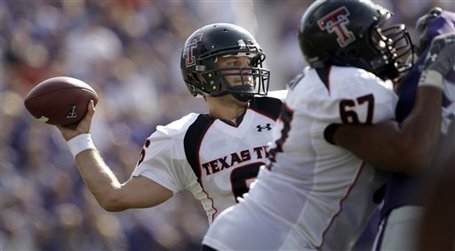 I'm not sure when all of this will take place, but it will happen today.

There was a time when opening conference play against Kansas State, Nebraska and Texas A&M would have been grounds for a call to the league office, raising cane about unfair treatment. That was the 1990s.

Now it means, by coincidence, the Raiders open conference play with three straight weeks against programs in transition. Kansas State under a third-year coach is followed by Nebraska and Texas A&M under first-year coaches. Tech, which has been able to perfect a certain way of doing things over nine years, should demolish both.

Captain Leach says that a road win, in the Big 12, is a big win:

"A road win in the Big 12, that’s a big win," Leach said. "They’re all big, especially against a team that’s as explosive on offense as they are and as good on offense as they are. I thought our defense, once they got rolling - after we gave up the first two touchdowns - stayed in there and kept playing. I thought they were real tough after that."

I say this every time Williams writes an editoriail, I wish he'd write more of them. Go read the whole thing.

Staying at the LAJ, Jon Garten looks at the tremendous game that Lyle Leong had. Here's Leach on Leong, previously in the Captain's doghouse:

"What he did to get in (the doghouse) is highly classified. It’s deeply guarded in the bowels of Texas Tech, and it’s guarded by the dogs that you saw on Harry Potter. OK?" Leach said after Texas Tech beat Kansas State 58-28 Saturday at Snyder Family Stadium. "As far as what he did to get out, just made plays. He just focused on being a great team guy and made plays."

We may have to save this conversation for sometime later this week, but I don't think there's any doubt that Leong has supplanted Britton, but I'd like your opinions as to if you think Leong is better and why.

And last, but certainly not least, Williams looks at the record breaking day that Graham Harrell had. Here's Captain Leach on Harrell's performance:

"Why I think it’s the best game he’s played was he managed the unit better in this one than any of the others," Leach said. "He managed the unit, responded to things without ever getting rattled, improvised a few times when he had to and did a real good job staying within himself and just making routine plays."

ESPN Big 12 blogger Tim Griffin was also at the Texas Tech v. Kansas State game and filed a number of reports on the yesterday's game (check out his blog here). Griffin asks how good this Texas Tech team is, and here's Griffin on some of his observations:

The defense was just as strong, limiting KSU to 296 yards for their third-straight outing allowing opponents less than 300 yards.

We still don't know much about this Tech team, which has won all of its games by at least 16 points, but still beaten five opponents with four combined victories over FBS teams after Saturday.

The schedule will get a little more difficult with games against Nebraska and a road trip to Texas A&M. But from there, a punishing stretch of games against ranked teams Kansas, Texas, Oklahoma State and Oklahoma will determine if the Red Raiders have legitimate hopes for their first Big 12 South title.

Griffin also takes a look at Graham Harrell's day, and Harrell sounded humble about the honor of being Texas Tech's all-time passing leader:

"It's a huge honor to be able to do this," Harrell said. "We've had a lot of great players come through that have helped me out. It comes with a lot of effort from a lot of different people."

I'm going to lump the other various game stories together, there's good news and notes in each of them. Good times.