Share All sharing options for: No More Carona-Extra Points 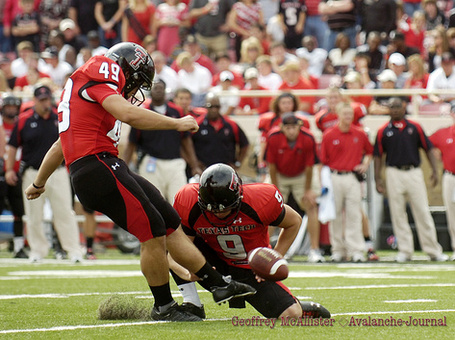 “We’re going to play Fowler for the extra points and things like that,” Leach said.

He said Fowler also will handle at least short field goals. Carona will continue to kick off.

“Donnie just needs some consistency, and some of that just takes time,” Leach said. “And that’s kind of how we used to do it anyway - we’d split that up. I’d rather not split it up, but we used to have the kickoff guy and have the extra point/field goal guy. I’d rather not do it that way, but it looks like that’s what we need to do.”

Even with the picture above, and all I know about kicking is what I've watched on television, but doesn't Carona look uncomfortable in the photo above?  Seems like all of his weight is on his non-kicking leg and leaning backwards. Also notice the turf granules, was he dragging his toe the entire kick?  That could lend itself to not having much power behind a kick.

And it sounds as if Carona's teammates are shaking their head, trying to figure out what went wrong, but they still want to see him succeed.  Here's Eric Morris from Ybarra's article:

"He's a young guy and we need to work really hard right now at keeping him up and not letting him get down on himself," Morris said. "Allowing him to know that we're there for him, and we're supporting him. But he also needs to start making some field goals."

"I'm not even gonna talk about that, that's just terrible," center Stephen Hamby said of the play. "No comment on that. That got bad real fast."

Williams has a little bit of information on your new kicker:

Fowler transferred to Tech from San Jacinto College, where he spent one season as a pitcher in the baseball program. The last 21/2 seasons, when the Red Raiders have needed an onside kickoff, Fowler has been the kicker in that role.

Fowler is from The Woodlands, where he was a high school teammate of current and former Tech players Daniel Charbonnet and Danny Amendola. As a high-school senior, he made 13 of 17 field goals and was named Class 5A third-team all-state by The Associated Press. He was 4 for 5 his junior year.

Fellow blogger RaiderAde (DTN user ayleein) has watched Fowler in practice and hasn't been overly impressed with him:

I know it's a move that will please a lot of discouraged fans, but I've seen them practice and I haven't been more impressed by Cory Fowler there.  Granted,some players don't perform equally in practice and real game situations, and hopefully that will be the case for the walk-on senior.

In any event, I hope that Carona is mentally still with it, he can shake this off this demotion and move forward and still be a productive player for this team.  I had high hopes for Carona early this season and I still do.  I hope he feels the same way.

As far as Saturday's game against Aggie, all I can say is just hold your collective breaths after every touchdown.