In his never ending quest to recapture lightning in a bottle, Mack Brown had an ingenious idea. In order to save the fledgling Longhorn Network and revive his rapidly fading coaching career he and Vince Young would find Bigfoot and air the documentary on the LHN. Here's his incredible story.

We knew the George Strait concert in San Antonio would keep us up pretty late so we got a hotel room on the edge of town instead of driving all the way back to Austin last night after the show. Then we woke up this morning to a slap in the face by the San Antonio Express News who ran a ridiculous front page story about how money doesn't buy wins. Whatever. You guys down here don't know what the hell we're doing on the 40 acres so mind your damn business. Screw you too Red McCombs, BTW.

Anyways, I poured myself a sangria to calm down and I kinda blacked out and I woke up this afternoon to find a real mess in my hotel room.

Somebody had drank a whole pitcher of sangria and then ate a whole bottle of pickle relish. They also tried to smash open a big can of beans to eat but couldn't get it opened I guess so they gave up and peed all over the newspaper instead. I knew immediately that this couldn't be the work of any civilized human being so I drew the only logical conclusion.

It was obvious that a Bigfoot broke into my hotel room and did a bunch of real bad stuff.

Of course I was shaken so I called Colt but got his lame voicemail (you're still using the Billy Dee Williams stuff, Colt?) I didn't even bother to leave a message because I knew my man Vince wouldn't be busy so I dialed him up. He answered on the first ring.

We exchanged pleasantries and then got down to business. I told him that Bigfoot had obviously broken into my room and how we could cash in on that. We'd go chasing Bigfoot and capture it on film and air it on the LHN and then everybody would carry us on their shoulders again. And after we made history chasing Bigfoot we could go out and find some mermaids. Of course he signed on and he caught a flight from Austin to San Antonio immediately.

As soon as Vince got to my hotel room we hunkered down to start studying the history of Bigfoot in the Hill Country and came across this bone chilling article. This guy actually shot a Bigfoot a few months ago just off one of San Antonio's major highways. Here's his account:

He attracted Bigfoot into a homeless campsite in the woods close to Loop 1604 and Highway 151 in San Antonio, by nailing pork ribs to the side of a tree. KSAT reports he said: "I nailed... pork ribs from the WalMart down the street to the side of the tree, and low and behold, he came and started eating the pork ribs off the tree.

But his amazement at the appearance of the beast did not stop him from grabbing his cell phone and taking a short video clip of the beast outside his tent.

When the Bigfoot returned a second time, he grabbed his rifle and shot it. Then he rented a truck and transported the body to a location outside of Las Vegas where he has not disclosed and where it remains.

So we knew for sure there was at least one Bigfoot in this area. They also probably run in packs like gang bangers, which means there are countless Bigfoot punks around here. Knowing this we headed out in Vince's silver Hummer that he had shipped in and immediately started looking.

It wasn't long until we came across our first traces of the Hill Country Sasquatch. I spotted a break in a fence in on the NW side of town and we stopped to investigate. I told Vince to try and pull the fence apart and he couldn't even make it budge. Since Vince couldn't replicate the act it was pretty substantial proof that Bigfoot had busted through this very spot. 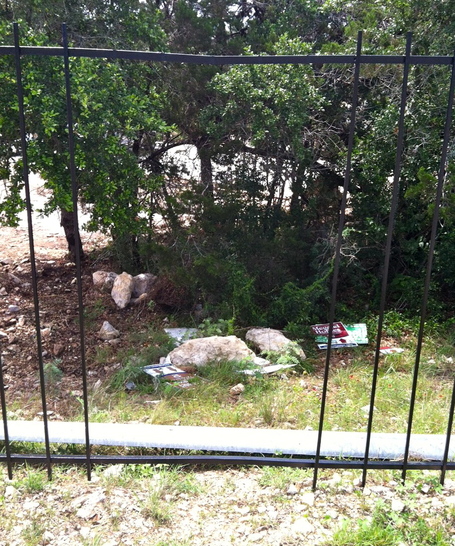 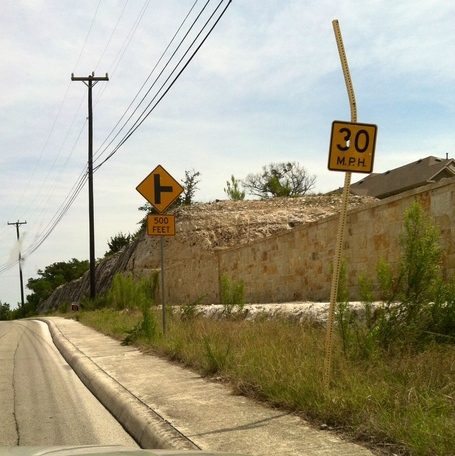 I told Vince to try and rip the top of the 500 feet sign off and he couldn't do it. He also couldn't poke a hole in the 30 mph sign with his thumb, so this certainly proves that there was another random act of violence by that damn Bigfoot.

We then headed to Wal Mart to buy some ribs to see if we could lure a Bigfoot to the fateful spot where the last one was shot. We cooked the ribs and nailed them to the same tree but Vince got hungry and ate both racks and all I got was one freakin' corn on the cob. 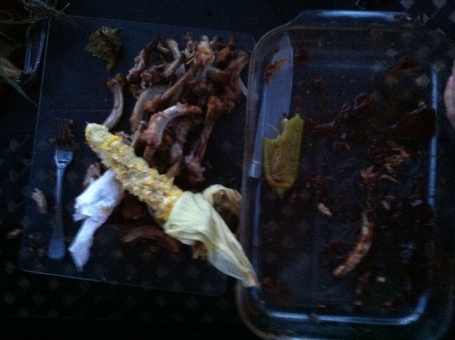 He even ate all the peppers before I could convince him that this was supposed to be for science. He just kept saying "You promised me the Heisman bro" and then he'd suck another rib bone clean with his teeth. THEN HE WOULD EAT THE BONE. I sat there, watching this, getting madder and madder knowing that Vince was eating all our Bigfoot bait and possibly killing our chance at redemption. I think the only time I had been more upset was that time all those mean Alabama guys tackled Colt.

I went off by myself for a little while to cool down and gather my thoughts. After a while Vince finished up the last of the bones and washed them down with some milk. He came over and messed up my hair and we laughed like crazy and then we did a big chest bump. Vince always knows how to make me feel better and he said we should keep looking for Bigfoot so we did.

Out west of town near Castroville we saw a mailbox that looked half eaten. 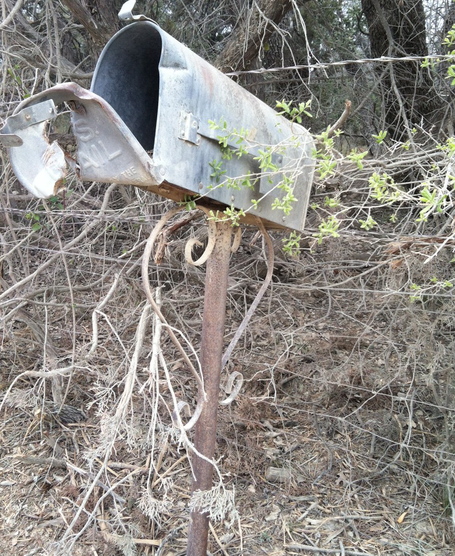 I'm not sure he gave it the old college try, but it's still pretty solid evidence that only a Bigfoot could eat mailboxes and not National Championship winning, rib bone eating humans.

It had been a long day and we were getting tired so we decided to pack it in. We felt pretty confident with our findings and knew that all the LHN viewer would be on the edge of his seat watching our historic documentary. We went back to the hotel to start editing and splicing. Vince had some great ideas on some of the music tracks he could lay down for the documentary and started trying to call Lil' Wayne but he wouldn't answer, even after Vince called from an anonymous number about forty times. Vince seemed puzzled and assured me that Lil' Wayne was his boy and I didn't argue.

But even Lil' Wayne acting so obviously juvenile and ignoring VY couldn't dampen our spirits. We were on our way back! It wouldn't be long before everyone was high-fiving us and carrying us around Austin on their shoulders again just like the good ol' days! I started thinking about buying a lot of baby shampoo to wash all of the Gatorade outta my hair every night and I wondered which jeweler could make the sickest Bigfoot hunter diamond ring.

As these magical, championship replacing thoughts were racing through my mind I glanced out on the patio and my heart almost stopped.

Bigfoot had snuck back onto my patio and created a dramatic scene where a cowboy Santa and a Bud Light Lime alien were trying to tame a giant white wild stallion. 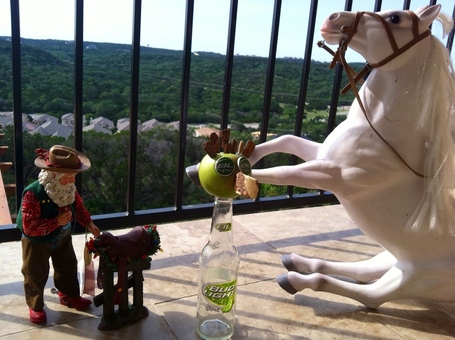 It was so obvious this was the work of a Bigfoot. I mean who else would do something so sick like this?

You're trying to tell me that Vince and me would be drinking Bud Light Lime on my hotel room patio and crying all day and NOT hunting Bigfoot?

You think we'd spend our time trying desperately to come up with a plan to make us relevant again?

C'mon Bigfoot. We're on to you.