Texas Tech Sunday Morning Notes - I Know Who You Are Edition

Share All sharing options for: Texas Tech Sunday Morning Notes - I Know Who You Are Edition

I'm not sure that I completely understand why Auburn University hired Gene Chizik, but the reaction across the interwebs is amazing. Clone Chronicles asks that God have mercy on Auburn for hiring Chizik. SEC blog, Team Speed Kills writes that Auburn went with Chizik because . . . Track'Em Tigers has video of Auburn AD Jay Jacobs being heckled at the airport (hilarious). ESPN Big 12 blogger Tim Griffin weighs in on how difficult it could be for Chizik's replacement at Iowa State.

Now I know the definition of an "athletic office disaster" and we have not even come close to the levels reached at Auburn.

Congrats (again) to Michael Crabtree who was named to the 2008 Football Writers Association of America All-America First Team. LAJ's Don Williams notes that Crabtree could be a consensus All-American for a second year in a row if he's named to the Sporting News and Associated Press teams to be released later this week. The best ever at Texas Tech? Yeah, probably.

I meant to mention this quite a bit earlier, but Darcel McBath is going to play in the East West Shrine game on January 17, 2009 at Houston's Roberton Stadium. Congrats to Darcel for the opportunity to better his NFL standing. 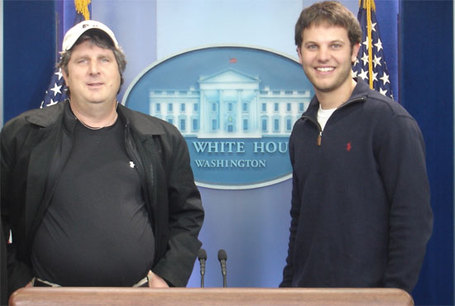 LAJ's Don Williams recounts how Captain Leach and quarterback Graham Harrell had the opportunity to tour the White House on Saturday and met with President George W. Bush. Texas Tech's official site has all of the photos. Texas Tech media relations director Blayne Beal had this to say about Leach's and Harrell's meeting with the President:

Beal said the president showed his Texas roots in the company of the Red Raiders.

"He said he has a passion for college football and watches us all the time."

And I'm sure Captain Leach was curious why the President was not roller-blading:

The Tech football contingent was afraid they were going to miss the president. They had afternoon flights back to Texas, and Bush was away getting his daily exercise when they arrived. But the president relayed a message to hold up the Red Raiders.

Beal said when the motorcade pulled up, Bush stepped out "dressed in bike-riding gear and all that stuff."

And Graham Harrell saying all of the right things.  Makes you pretty damned proud to be a Red Raider:

"Being able to go to Washington D.C. for the first time and to have the honor to meet the President is something that I will never forget," said Harrell. "President Bush is one of the most genuine individuals that you will ever meet and I was flattered to hear that he really enjoyed watching our team play this season. I want to thank Trey Bohn and John Dorff for allowing me this great opportunity. Today was a special day to be a Red Raider."

David Brandt of the Clarion Ledger writes about linebacker Patrick Trahan being ready to take over for the suspended senior starter Ashlee Palmer:

Trahan, a 6-foot-3, 225-pound junior, has played in all 12 games, starting one. He has 24 tackles, including 3 1/2 for a loss or sack. Along with playing a sizable amount at linebacker, he's also been an important part of the special teams, helping on coverage units.

Trahan's biggest downfall has been drawing a handful of 15-yard personal foul penalties. But Nutt said he's seen plenty of maturity in Trahan's game and isn't worried about handing him the job.

"He's gotten better if you've noticed over the past three or four weeks," Nutt said. "He's really come along. He's done some things better than Ashlee."

Jim Mashek of the Sun Herald takes a look at the vaunted Ole Miss defense:

"We demand a lot out of our players," Nix said. "They just had to buy into what we can do, as a defense. It was a matter of believing."

The Rebels produced some individual stars like defensive tackle Peria Jerry, an All-SEC selection who led the league in tackles for losses (17) while recording six sacks. They showed significant improvement at linebacker, where role players such as Tony Fein and Ashlee Palmer turned in solid senior seasons. And in the secondary, playmakers emerged. Kendrick Lewis had four interceptions and Jamarca Sanford was a sure-handed tackler at strong safety.

"We probably got better every game," [defensive coordinator Tyrone] Nix said. "The only game where we didn't get any better was the South Carolina game (a 31-24 loss on Oct. 4). Other than that, you could see the difference week to week."

Yeesh. Texas Tech lost to the mighty Lamar Cardinals 85-79 (boxscore). LAJ's Jeff Walker has the game story from last night's loss and here's Junior Knight on why the team lost:

The defense may have been bad, Lamar shot 50.0% from the field, but offensively this team is relying way too much on jumpshots, evidenced by the team going 6-27 from beyond the three-point line. When the outside shots aren't falling, Voskuil was 6-15 and Roberson was 6-22, then this team will struggle unless Junior Knight can figure out how to establish some sort of inside presence.

I'll write more about this on Tuesday's DTN Basketball Report, but this team is going to struggle, especially if the full compliment of players aren't available (Okorie and Prince were both out and PK didn't go to his bench other than to play Cohadarevic 22 minutes) and if the shots aren't falling from the outside. I don't like losing to Lamar, but this team has got to figure out how to play under PK and I'm more than willing to give him a little bit of time. You're never as bad as your worst loss or best win, and this may qualify as the worst loss for the season.  I'm going to be patient.