Wooo! I got one girl to Facebook me (shout-out). Success.

In addition to The Red Solo Cup, an Ole Miss blog, there's also The Hotty Toddy Blog. Make sure and check them out. 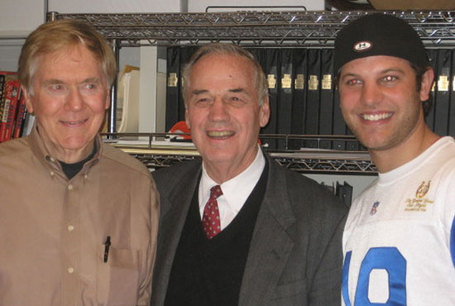 Quarterback Graham Harrell may have been stiff-armed in New York, but in Baltimore, where Harrell was the recipient of the Johnny Unitas Golden Arm Award, he was given first-class treatment. Here's Harrell:

"At the end of the week, I’ll feel like this is great,’’ Harrell said. "It’s an honor to be considered for the other awards. Not going to New York is tough. But there’s so much politics in college sports, and there’s not much you can do about it. When you’re playing such great schools with such great tradition, they’ll get the benefit of the doubt when all other things are even.

"But I don’t know how a couple of days could get any better than this. This is as first-class as it comes and as good as it gets.’’

Congrats to Graham on a well-deserved award.

Sam Farmer from the LA Times had NFL Network scout Mike Mayock take a look at Graham Harrell, his pro prospects, and how difficult it can be to judge a "spread quarterback":

Mayock charted two games and counted 76 passes by Harrell, 63 of which flew no more than 12 yards downfield. Of the 13 remaining throws, only six were in the 12- to 21-yard range that scouts like to see.

"I wanted to see those intermediate routes, the curls, the deep outs, the digs," Mayock said. "I call those 'stick' throws, where you have to have that arm strength to stick it in there with velocity."

Mayock's analysis after watching the two tapes of Harrell?

"I want to like him," he said. "But it's very difficult to evaluate him."

Right now, NFL Draft Scout has Harrell as the 2nd ranked senior quarterback and projected in the 3rd or 4th round, behind Rhett Bomar, and probably the reasoning is that Bomar has a stronger arm, despite his issues off the field.

Again, it will be about Harrell's ability to demonstrate that he can make all of the throws with some zip.

The hope is that defensive end Greg Hardy and defensive tackle Peria Jerry, who have combined for 14.5 sacks this season, can disrupt a few plays. But when they can't get to Harrell, the onus is on Sanford and his friends in the secondary to make the tackles and make them quickly.

In an effort to make Texas Tech uncomfortable, Nix plans on throwing just about every coverage his defense has at the Red Raiders to try to keep them under their 44.6 points per game average.

And a few well-timed hits from Sanford certainly wouldn't hurt the Rebels' chances.

"They may catch a few and that's OK because they're good," Sanford said. "We've just got to make sure by the end of the game that they don't want to catch it anymore."

Also from Brandt at the Clarion Ledger, starting linebacker Ashlee Palmer will not play because of academic issues:

Palmer, from Compton, Calif., has been one of the team's most steady players over the past two years after transferring from Compton Community College.

He led the Rebels with 89 tackles last season and had seven tackles for a loss. After a slow start this season under new defensive coordinator Tyrone Nix, Palmer was playing much better of late, and had an acrobatic interception during the team's 45-0 victory over Mississippi State in the Egg Bowl.

Nutt said he does not expect any more academic casualties among players expected to play in the Cotton Bowl.

LAJ's Jeff Walker previews tonight's game against Lamar and the most discouraging news is that senior forward Michael Prince and junior guard Nick Okorie will not play due to ankle injuries. Yikes. Here's Walker on their status and possible replacements:

Prince suffered his injury against Wichita State, while Okorie suffered a bad ankle sprain during practice. Prince made the trip to Beaumont, but Okorie stayed in Lubbock to continue rehabilitation. Tech trainer Jon Murray didn’t have an estimate for when Okorie might be able to return. Murray said Prince will be a gametime decision.

The injuries will force Tech to use more of its bench, and change how some players have been used thus far. Mike Singletary has been one of the first players off the bench, but he could get the start in place of Okorie. Singletary, a sophomore, is third on the team in scoring (11.9) and is averaging almost the same amount of points as Okorie (11.8). Singletary also hit the game-winning 3-pointer with four seconds remaining in Tech’s last game against Wichita State.