State of the Union

Share All sharing options for: State of the Union

Texas Tech is now over half way through the season, and as predicted at the beginning of the season, they are 8-0.  It appears that our Red Raiders have avoided the bad loss (unless something tragic happens and they lose to Baylor).  In the first half of the season, we have seen the gamut of what this year's team has to offer.  Given Williams's solid performance against KU, it won't surprise me if we don't see a last second, game-winning field goal before the season is over.  As we enter the "meat" of our conference schedule, I thought it would be good to take a step back and look at where Tech stands.

It has been easy for us to see all of the foibles of our Red Raider team and think of the ways that Texas Tech can be beaten.  As in 2007, we have seen the mighty fall, so it is easy to see how it could happen to Tech.  The bloggers and analysts have pointed out how even Texas, Alabama, and others may be beaten.  Why are there so many obvious flaws?  Are there no truly dominant teams?  Why is this the case?

I belive much of what we have seen can be explained by parity.  Especially parity in the level of talent at the top of the depth charts. More of the elite players are choosing to turn pro as soon as possible versus completing their eligibility.  While, as Leach says, a red-shirt or gray-shirt season may help freshmen to adjust to college and perform better when they do start, it is one less year that elite talent like Crabtree gets to take the field and make a difference because they can then enter the draft after playing only 2 seasons.  It is the same fate that college basketball suffers because elite players enter after their freshman year.

As an elite player this leaves you with 2 options: 1) go to a top ranked school and hope to beat out the likely top-ranked, upper-classman incumbent at your position, 2) go to a school that guarantees you will get lots of playing time right away.  So we are seeing the elite talent be distributed more equitably among teams.  Talent wise, the difference between winning teams comes down to 1 - 2 players.

The distribution of talent makes coaching, individual match-ups and schemes all the more important.  Going into the home stretch, I think it is precisely these areas that make it plausible that Texas Tech will win out.  This is not to say that there are not some very tough battles ahead, but none of them are un-winnable.  So far this year, we have seen Tech play in cycles as the players and staff work out the kinks and get the players tuned up.  It has looked something like this: 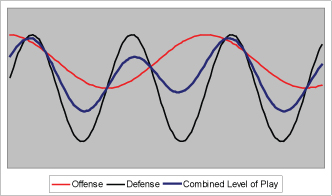 Not that cyclical performance is uncommon in college football.  It is how Oregon State can beat USC, and it is in many ways a product of the parity mentioned above.  It is the ability of the coaching staff to reduce the peak to trough variation, resulting in more consistent performance that results in winning conference titles and national championships.  It is this consistency that has prevented Tech from suffering the "bad loss" thus far and it is this consistency that I expect to see more of in Tech going forward.

I think there is no doubt that the offensive consistency has been bolstered by the ability to run the ball and force teams to play honest defense.  While it is clear that Harrell's and Crabtree's individual statistics may not be as eye-popping as in 2007, the multidimensional offense gives Tech more options when one is taken away.  This is where the offensive scheme employed by Leach allows Tech to create and exploit the individual match-ups that give Tech the biggest advantage.  There is no reason to believe that Tech will not be able to score at least 35 points in every game we play.  And given the level of pass protection that out line is providing and the pass defenses of the teams we are preparing to face, it could be more.

I jokingly commented the other day that I was going to start referring to the Texas Tech defense collectively as Sybil (after the woman with 17 personalities).  We have seen the most inconsistency from the Tech defense.  Contrary to popular belief, Texas Tech does have a legitimate defense.  The run defense has been pretty good, holding teams to less than 100 yards on average.  Though some would say this is a function of (a) the best teams we have played are 4-3, and (b) the pass defense is a sieve.

While I cannot argue (a), there is good reason to contest (b).  We have seen at least 5 quarters of play in conference games where the Texas Tech defense has shut down the opposing offense.  The first 3 quarters came in the 2nd quarter versus KSU and the 3rd and 4th quarters versus A&M. The next 2+ came versus KU.  If you still don't believe me try this: in the opening of the second half, KU  ran 5 plays and gave up 3 interceptions to Tech. after the 1st quarter, the Tech defense adjusted and totally shut down KU until late 4th quarter when they scored a touchdown during clean-up.

This success is entirely related to the scheme that Tech had on the field at the time. In all five quarters, Tech employed a nickel-type defense and relied on the defensive line to pressure the quarterback and contain the run.  The nickel defense allows Tech to play more man coverage versus zone in which they have struggled.  Based on recent comments by McNeil, I would not be surprised if we see more of this, especially against Texas (who has become much more of a pass-oriented team this year in absence of a go to running back).  This is just the sort of scheme that Tech needs to play to force our opponents to be more one dimensional and force them out of their usual game plan.  Though I don't foresee the type of dominance that Tech displayed against A&M and KU against Texas, OSU, and OU there is no reason to believe that the defense will not be capable of forcing 2 or 3 punts and limit these teams to 1 or 2 field goals instead of touchdowns each half.  Given the consistency of the offense, that is probably all Tech needs to come away with a win.

So while the pundits have been somewhat bearish on Texas Tech and the strength of their schedule thus far, I am bullish on their chances going forward.  With our offense, there is no reason that we can't score against any of our upcoming opponents.  The flashes of greatness from the Tech defense tell me that there is more to them than meets the eye and that they may have just found their true identity.  In the past, I mentioned that I believed that it is important for a team to "peak" at the right time.  Tech may be preparing to do just that.

What do you think?  Will Tech peak at the right time and win out?