Seth and Travis put UCA to bed, including all of those danged penalties, and we consider how Texas Tech will deal with UTEP. Plus, we discuss the first of school, Chuck 'E Cheese and Wall*E.

Share All sharing options for: Weekly Conversation: Recapping UCA and Thinking About UTEP

Travis: Typically teams improve the most between weeks one and two, so I was taking that into consideration. But also I kept getting text messages during and after the game about how dire the situation appeared on both sides of the ball. A lot of the feedback I was getting was from folks at the game so apparently the team looked much worse in person than they did on TV. I defended Webb pretty vehemently because, yes, he made some mistakes but he also made some terrific throws. He threw a deep out to the left sideline and he was standing near the right hash and he nailed it. Not many guys can make that throw.

Sometimes guys just have a bad game and I still firmly believe that that's what we saw on Saturday. I'm already a big Madison fan though. That kid is gonna be good. -Travis on Texas Tech vs. Central Arkansas

I also took some flak for using the word "comfortable" when describing Webb. To me he just appeared much more relaxed and poised than he did for much of last season when he'd scramble around (relatively) and heave it up. In fact, at times he looked too relaxed and sorta just stood there flat-footed like the play had been whistled dead. That's not a good thing, but it speaks to his comfort level in the pocket. And Kingsbury mentioned it yesterday, but that was only his 7th start at the college level. The upside is there for him.

And yes, the defense was getting gashed but there are several little things that can be tweaked to make improvements. I know it's not a perfect analogy but I think back to Game 2 of the Spurs/Mavericks series. The Spurs went on to win a championship in dominating fashion, but in Game 2 the Mavericks completely destroyed them forcing 24 turnovers and made them look bad in every facet of the game. Sometimes guys just have a bad game and I still firmly believe that that's what we saw on Saturday. I'm already a big Madison fan though. That kid is gonna be good.

My initial reading of the game was somewhat confirmed later in the week when I got several messages from guys that watched a replay of the game and felt better about this season's prospects.

I am concerned about the discipline on the team and I think it's got to be corrected if the team ever wants to get over the 8-9 win hump. I know you and I don't completely agree about how to approach this, which is awesome. It shows the diversity of thought at VTM when even you and I can see things differently.

So, with that, tell me how you would fix this problem that the Red Raiders can never seem to solve. It goes all the way back to the Dykes' regime but it seems that Tech always struggles with penalties. How would you address the issue, and how do you think a late Saturday night in ol' El Paso will play out?

Texas Tech can't afford to be undersized or undermanned on the defensive line this week and they must play their best tacklers. -Seth on playing UTEP

Seth: I think the first thing is to NOT over-react. That's really imperative and coaches have to take a step back and look at this from a big picture perspective. The first thing to consider is that there were three personal foul penalties, one was a leg whip, which may have been a bit questionable, one was Jalen Barnes jawing with an opponent and the other was Jarrod Kaster's late hit. That's three players out of 85 players and inversely, you had 96% of those other players that played the game, maybe not perfectly, but gave good effort. Yes, there were some other penalties that were maybe a bit maddening, lining up offsides or a false start or whatever, but those 15 yard penalties are the killer. The other thing to consider is the number of penalties per play, which is the idea that the team that runs more plays is more than likely going to have more penalties. Granted, not to the extent that Texas Tech has penalties. Texas Tech had 15 penalties for 114 yards and ran 94 plays while Central Arkansas had 5 penalties for 34 yards and ran 89 plays. More than anything, it is just something to consider going forward, just in as much as when Davis Webb throws an interception, it may be better to look at how many picks he had per attempt rather than a total number.

The big thing for me is to consider that there's not this huge team wide problem with what I consider to be egregious penalties, so I think that Kingsbury has to be careful about how he handles this. Let the players know that if they can't correct the situation, then he'll correct it for them. There is no player that is irreplaceable. Kingsbury proved that last year when he just didn't have options.

The biggest thing I think in stopping UTEP is just freeing up the linebackers to make decent plays. UTEP has a 6'7" and 270 pound tight end that plays a ton of downs. That's essentially six offensive linemen that are going to play a majority of the time and they are absolutely going to try to control the line of scrimmage. Texas Tech can't afford to be undersized or undermanned on the defensive line this week and they must play their best tacklers.

You and I really haven't had a chance to discuss Kingsbury's contract extension. What are your thoughts on extending the bro-est of all bro coaches for 7 years?

Cade started kindergarten and he's doing ok. Still doesn't like getting up in the morning but once he's going he's fine. He told me last week a kid in his class has a mustache. I assume it's a boy. -Cade alleges fellow kindergarten classmate has mustache

Travis: I wrote last year between the regular season and the bowl game that I didn't think he deserved an extension after going 7-5 in his first season, but I changed my mind after the bowl win. More than anything these types of moves are necessary for recruiting purposes. If you have a coach that you believe in and are still optimistic that he (or she) is the right hire, you have to extend them so other coaches don't start whispering about their imminent demise in the living rooms of recruits all across the country. And contrary to my article this week, I continue to be impressed with the attitude and energy that Kingsbury brings. As I mentioned, I'm all for having fun, I just hope that we can all have fun and win all the games. Regardless of my disappointment in the on-field performance during week one, there is still no other coach in the country that I'd rather have prowling the sidelines and breaking hearts.

I haven't asked you yet, but did Fits start school this week, and if so, how is it going? Cade started kindergarten and he's doing ok. Still doesn't like getting up in the morning but once he's going he's fine. He told me last week a kid in his class has a mustache. I assume it's a boy. He and his sister both had a birthday over the weekend so he's gonna try to string that out for another 6 weeks or so. We're going to get cookies for his class tonight and he's still trying to swing a trip to Chuck E Cheese, but his baby brother continues to put the kibosh on that. He's not down with the big mouse.

Seth: I'm right there with you on Kingsbury's extension. Now, it's more about recruiting and being able to "sell" to recruits that a coach is going to be there long-term. At the very least, the coach can show the recruit the contract and they see 2020 rather than a contract that is set to expire in 2017, right in the middle of their college playing career. So yeah, betting on a young and hardworking Kingsbury to figure it all out sooner rather than later is a pretty good bet, but not as good as betting on the name of a horse.

Heh, Fitsum has been in daycare for the past few weeks because my wife is a teacher, so he's been back at the grind and I think this is his third week. He's actually been really good since he's been back at school. Fitsum is currently on a Wall*E kick. It astonishes me that he loves a movie where there is almost no human interaction for the first hour of the movie (this maybe shouldn't astonish me). And now, he's built the world of Wall*E in his room. His room is planet Earth. He has an Axiom, which is the spaceship. He has a Darth Vader toy that he says is Wall*E and a pump to propel a matchbox car that he got at McDonalds as Eve. He also has crated Rejectbots, which are the robots that are locked up because they are flawed. Well, he made all of his Rejectbots out of Legos and he knows exactly how each one is to appear. Sometimes I'll move one piece forwards or backwards and without fail, he immediately recognizes that it's wrong and fixes it. It's pretty amazing. 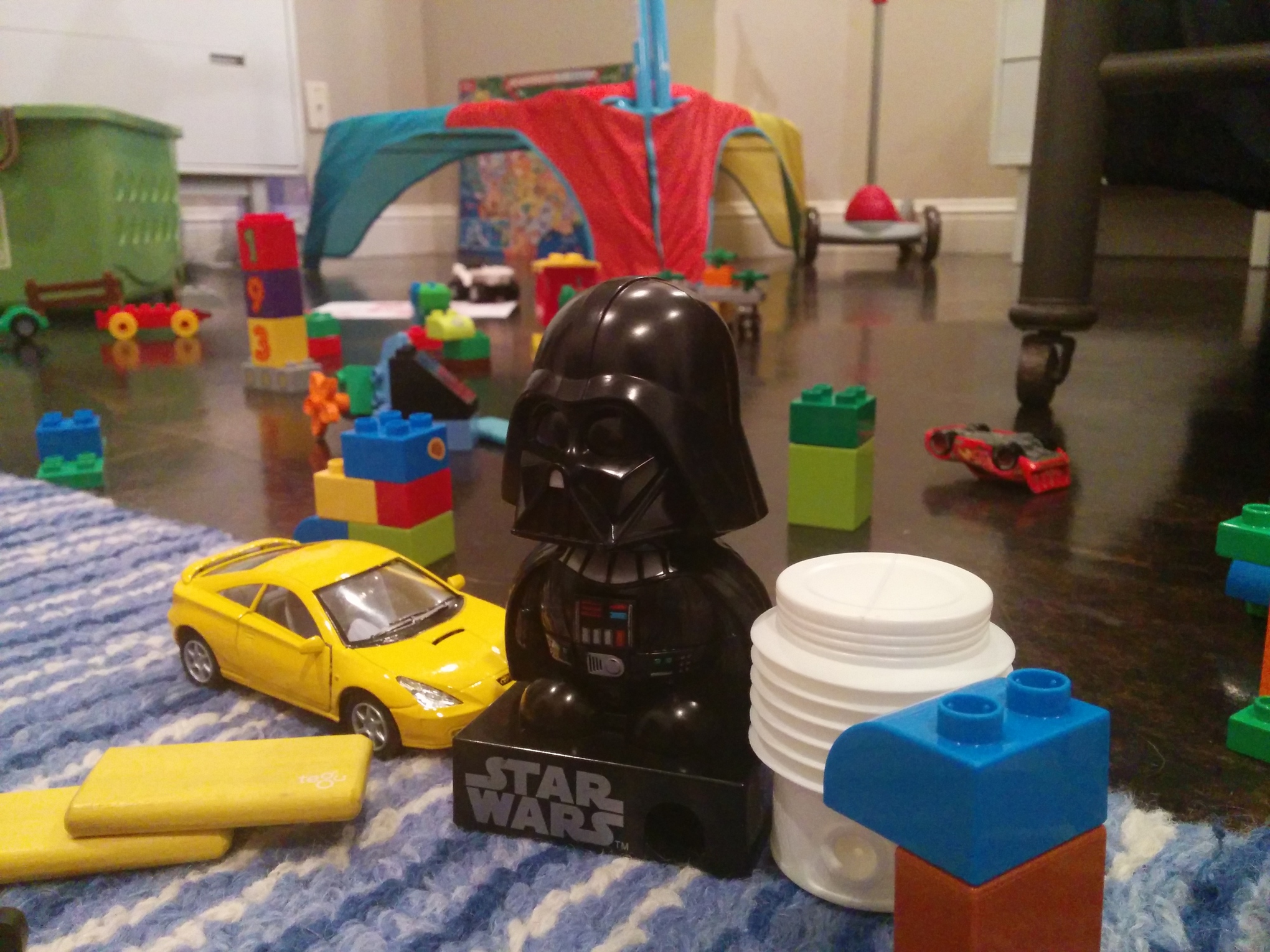 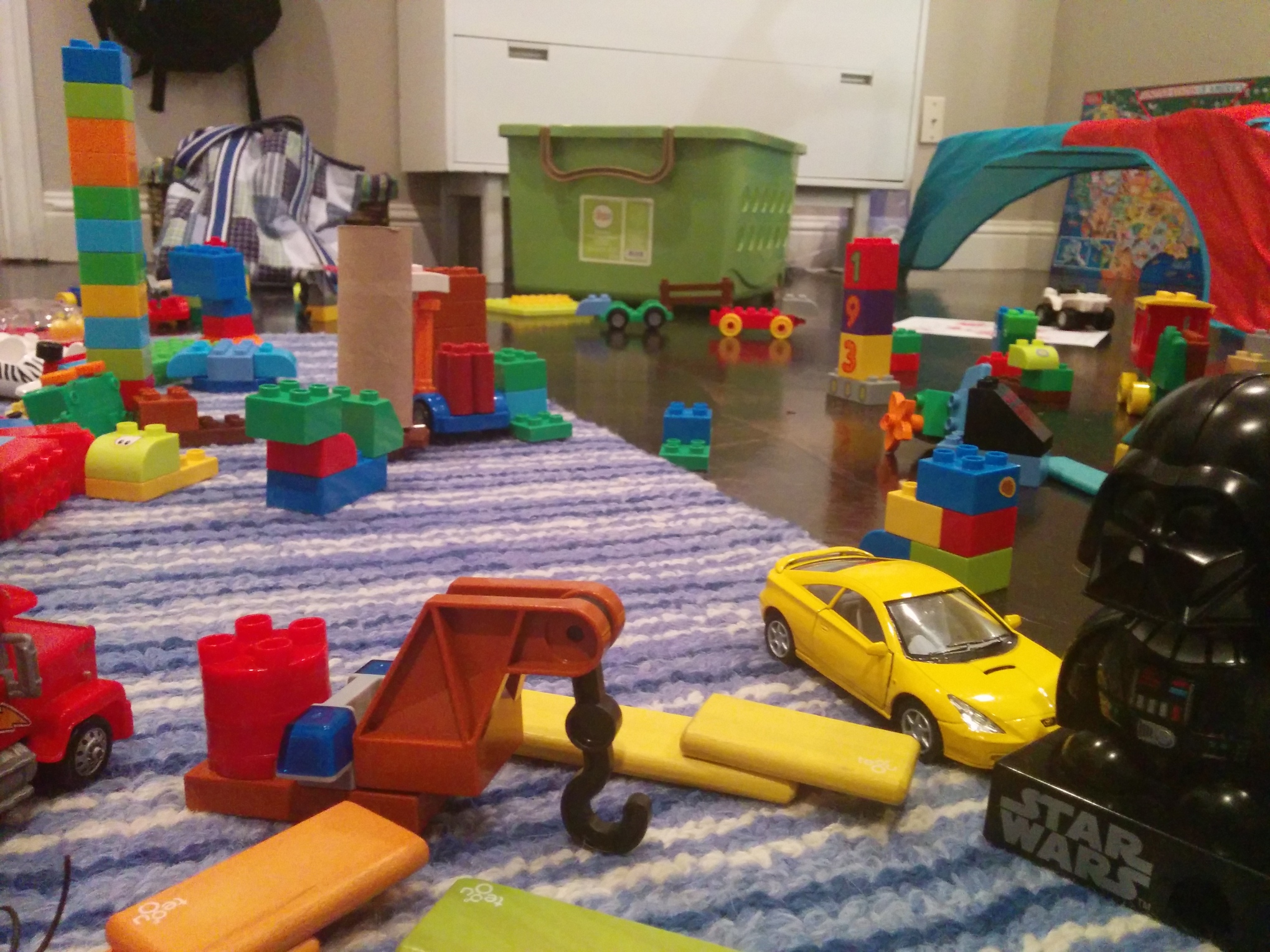 A view of planet Earth. 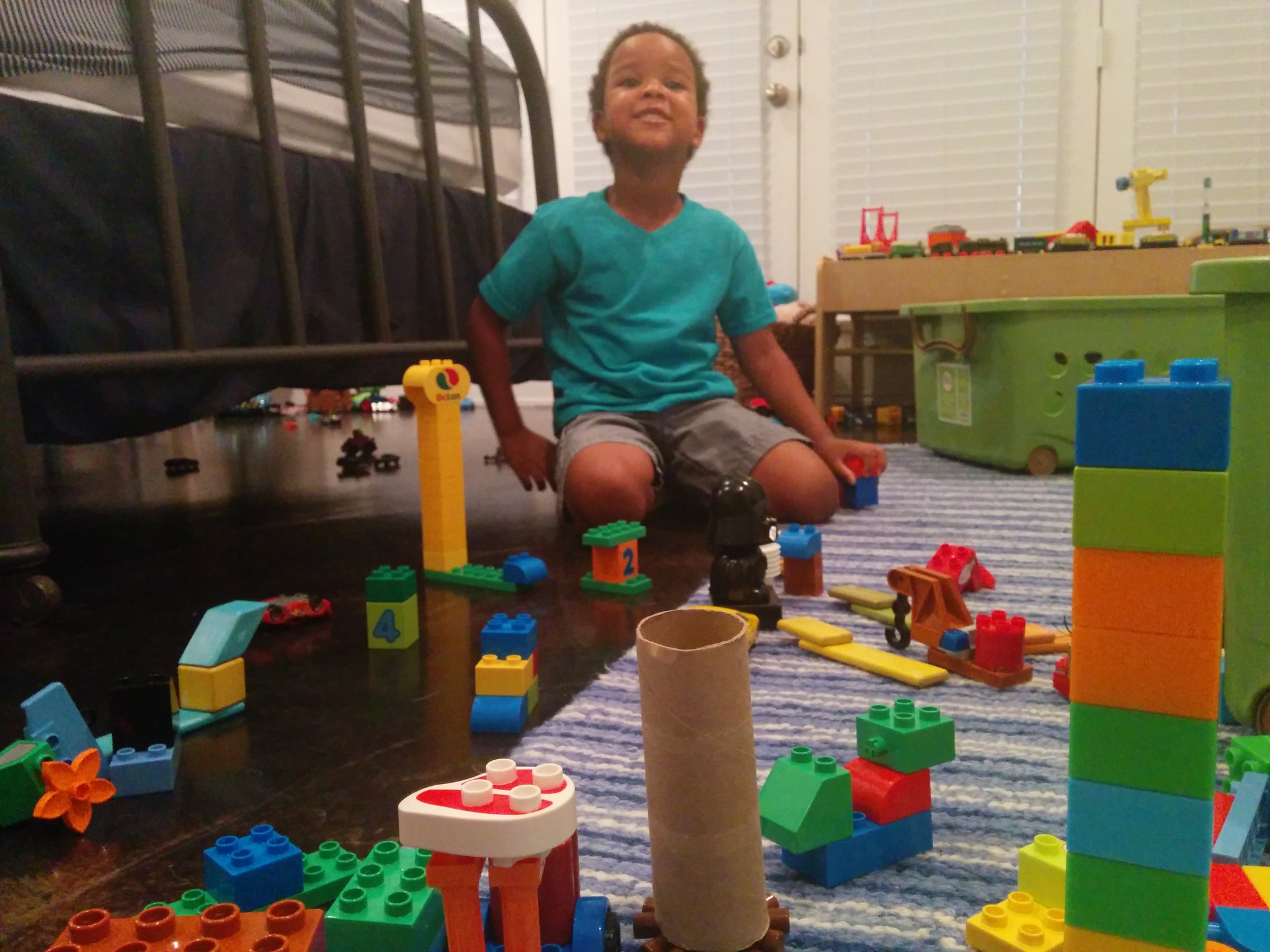 Fitsum is the captain of the Axiom and planet Earth.

Last question of the week. What's your prediction for the game and final score?

Travis: Wall*E is pretty good until the end when the girl robot incessantly yells WAAAAALLLLLEEEEEE over and over and over for at least an hour and it reminds me how happily married I am.

I think we see a big rebound this week in on field performance. That may not necessarily translate into point-differential, but Tech should play much, much better. 42-21 sounds about right for a Tech win and then we'll transition from WAAAAAAALLLLLEEEEEE to WOO PIG SOOIE. How about you? What's the final score?

Seth: With a possible starting cornerback out, I'm liking Texas Tech's chances more each day except that there's like a 70% or 80% chance of rain on Saturday night. That's great for West Texas, but awful for Texas Tech football. I think a three touchdown margin sounds about right, 45-20.