We're going to take a look at another successful play from the game against Arkansas.

Down two scores later in the third quarter with the offense driving, Tech is facing a 3rd and 12. You had just converted a third down with the Quinton White dump off where Jakeem Grant blew the middle linebacker back and White made a few moves to pick up just enough yardage. The offense needed to score on this drive and they weren't quite in field goal range yet, so Kingsbury had to call something to pick up all 12 yards.

So what does he call? He goes empty set, 5 wide, and calls a rub play. Well, not exactly, but there are 3 "rubs" in the design on opposite sides of the formation and Webb is to read which one worked best to lead a receiver open. Let's take a look at the formation and personnel.

Now, if you're not familiar with what a rub play is, you may know it by another name. They're commonly referred to as pick routes. And these are route combinations that are designed to get the defenders running into each other and tripping over one another to open up the receivers. If you remember in the bowl game, Jakeem Grant scored on a rub play where Amaro ran off the defender covering Grant.

Let's take a look at the play diagram from two different angles. 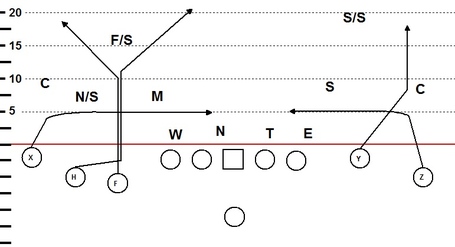 And then how it looked from the high angle camera shot.

I highlighted Grant's route because that is where the ball goes. But let's start actually on the right side of the formation. You've got Marquez running a wheel route and R. Davis running a "dig" route. The read Webb is to make on that side of the field is to see if the defenders get confused on their assignments when the two receivers cross, especially since the defense is giving a zone look (where crossing routes really flourish). Webb doesn't look this way, and it was prpbably by design or based off what he read on the other side of the field.

To Webb's left, you see that Polite-Bray is also running a dig route, which if the play developed long enough and nobody was open downfield would eventually lead to a mesh concept with R. Davis in the middle of the field (rub/pick #2 we've discussed).

And then you've got the route combo that J. Davis and Grant are running. Davis here runs right at the safety and will eventually run a corner route, breaking to the outside. But Grant's route is where it gets tricky (for the defense) and interesting. He runs behind Davis until they break in opposite directions. Webb is waiting until this moment to decide which defenders messes up and where he's going with the ball.

This is a few moments after the snap. You can see most of the receivers have made their first moves and can see the route combos developing.

The two outside receivers have made their cuts 5 yards in and are headed back to the middle of the field. You can see the proximity of the Z and Y receivers and how Marquez is basically running right at the corner back. You can see how Grant made a quick move towards the middle of the field to run behind J. Davis and the two are stacked headed downfield. The read here is how that deep safety and nickel respond to their impending cuts.

Focus on Davis and Grant and their covering defenders. 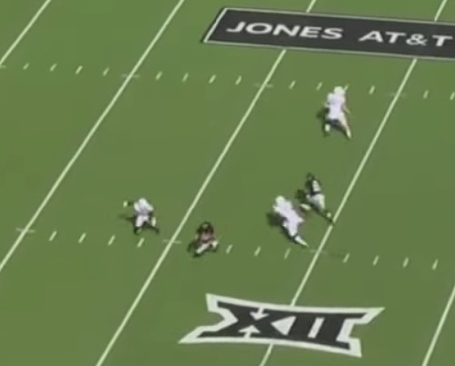 You can see that at this point, it probably doesn't matter who Webb throws to. Both receivers are open and have the first down, assuming the throw is on target. And it may look that Grant was actually covered better, but that other defender towards the middle of the field there is actually the middle linebacker. They were running what looked like a Tampa 2, which may mean nothing to you, just know that the two safeties are covering deep on their respective sides of the field, but in a Tampa 2 the MLB kind of drops deep to cover the middle of the field. It's a kind of faux cover 3. Anyways, he's not moving in a way that he can actually cover the throw over his head to Grant. Webb just needed to make sure to get the ball over him and hit Grant in stride, which he did.

This play worked on a few different levels. You've got the receivers running route combinations that should help them get open without depending on individual talent out running or out maneuvering the defender. These route combinations take the defenders out of coverage when run properly and the right read is made. These work well when you don't have elite level talent in your receiving corps. But much like any good offense, you are creating bad matchups for the defense and then exploiting them. With that nickel never really being in good position to cover Grant anyways, the cut away from him just sealed the deal. Unless the ball is thrown extraordinarily poorly, he has no shot at making a play on the ball and Grant is running to empty space with the endzone ahead.