Kliff called a little trickeration, and it happened so fast, I bet you didn't even notice it.

Share All sharing options for: The Air Raid Playbook: Tackle Over Toss Sweep

There weren't a lot of bright spots in this game, but I want to highlight two plays in particular this week. One was a trick play, and we all love the trickeration.

Early in the 4th quarter, Kingsbury called a toss sweep to the right and Jakeem Grant picked up 18 yards on the run. Sweet! But I bet you didn't notice a the formation, did you?

At first glance, nothing seems too out of the ordinary, right?

But wait. How many helmets do you count on the offensive line there? I get 6. But Tech doesn't run many, if any, 6 offensive lineman sets, especially this far away from the goal line. What if I told you the last play had four wide receivers and there wasn't a single substitution between snaps; that Kliff was going hurry up here? What then?

Let's take a closer look. What do you see? 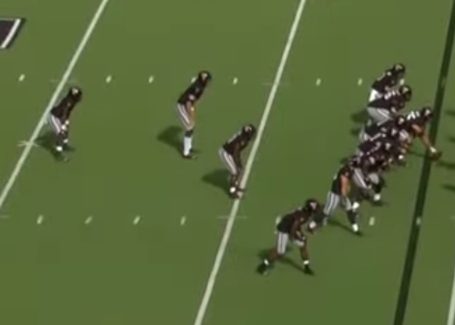 I don't know about you guys, but that left tackle looks awfully light in the pants...

That's because that's outside receiver DJ Polite-Bray. Where's LeRaven Clark? He's lined up outside of right tackle Reshod Fortenberry, similar to where a tight end would line up. And thus the title of the article. This formation is generically known as tackle over because of the shift of one of the offensive tackles. And I'm pretty sure DJPB is still an eligible receiver in this formation. 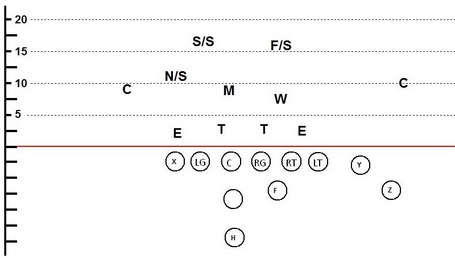 At first glance, this looks like a twins right pistol formation, and it sort of is. But what's interesting is that this personnel was used in the previous play in a four-wide set, with ABSOLUTELY NO SUBSTITUTIONS. X receiver here is DJPB, H is Jakeem Grant lined up in the backfield as a running back, F is Quinton White, Y is Jordan Davis and Z is Reginald Davis.

Much like last week, the first thing that throws Arkansas off is the formation. You go from a four-wide set to a power pistol formation without substituting. AND you go hurry up. The defensive backs are confused at the snap. You've got the nickel on the wrong side of the formation, the safeties are trying to switch sides and the playside corner back is looking to the sideline.

This is how the play was probably drawn up: 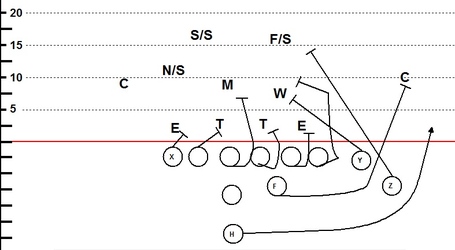 I've tried to link the blockers with what I can see was their blocking assignment. Every defender is accounted for except for the backside corner back and safety.

The blocking on the play was actually not that great, and yet the play netted 18 yards.

DJPB gets a hold of his man for a second, which is all you need from a backside player. The LG, Morales I think, cuts the defensive tackle in front of him. He gets enough of him to slow him down. Then every offensive lineman from the center on down to the right pull. Now, these may not be true pulls, but step/zone blocks. Either way, they don't simply stand up and engage the man in front of them. They're moving down the line of scrimmage.

Jared Kaster bumps into the tackle that Morales was supposed to cut en route to cutting the middle linebacker. Also not entirely effective, but reroutes his defender. The right guard, who I think is James Polk on this play, mans up his guy, essentially gets beat and pushed into the backfield, but was this was inconsequential. Fortenberry really shines here, though. He doesn't have far to go to pull or to step out, turns his back to the sideline and seals off THREE Arkansas defenders. Clark gets a head of steam and instead of tracking down his nickel (who started on the wrong side of the field), he turns back and picks up the middle linebacker that Kaster missed.

Jordan Davis seals off the the playside linebacker and does quite well for taking on a defender much larger than himself. Reginald Davis heads upfield to grab the playside safety and doesn't do a very good job, because he is able to slow Grant down enough to get caught from behind. White out of the backfield mans up the corner and forms the lane where Grant cuts it upfield.

Grant is finally pulled down by that nickel back, who Clark should have had had he lined up on the correct side of the field, had Kaster blocked the middle linebacker and had Clark not turned around to block someone behind the play.

Hat tip to mohave for helping out with the gifs this week. Awesome work!

(if the gif doesn't play, you can click on it and view it in a separate tab where SBN has it hosted).

This is an example of a tagged play. It's a quick call that's ran with the same personnel from the previous play/formation, but gives a completely different look. These are designed to catch the defense off guard and out of position, like Tech did with Arkansas here. The play could have been more successful had the blocking been a little crisper. I think Grant still had the chance to pick up more yardage had the nickel been blocked like it was drawn up or if he had broken the diving tackle attempt. What was left was a one-on-one with a safety, and you like the matchup of a skill player one-on-one with a defender every time.

You can expect to see more of these quick, tagged plays in the future where the team is in a hurry up situation. Will it be the same sequence, probably not. But even if it were, it hits too quickly for the defense to really be fully prepared for it, and that's what made this play so successful in spite of the blocking issues.

But speaking of blocking, I want to highlight one more outstanding block from Jakeem Grant. This was late in the third quarter where Webb dumped it off to White (not his first read, SURPRISE) and Grant locked up the middle linebacker and actually drove him back out of the play. The size difference is actually kind of comical, especially watching Grant move him out of the play. Enjoy.