So I got stonewalled again with video, so we're going to try something a little bit different.

This ain't your grandfather's option play here. Webb isn't reading the defensive end to decide whether he should hand it off or keep it himself. He still is reading the defensive end, somewhat, but his decision is one to either hand it off to the running back on an outside zone/sweep look, or throw to the H receiver for an outside screen. But that isn't the only "read" the QB makes on this play.

I'm going to go ahead and put the video here so you can watch it first, but you're probably going to want to come back to it a few times to see all the different pieces working together.

You all remember this play, but let's figure out what it was, how and why it worked. First, let's look at a quick diagram of the formation and play below: 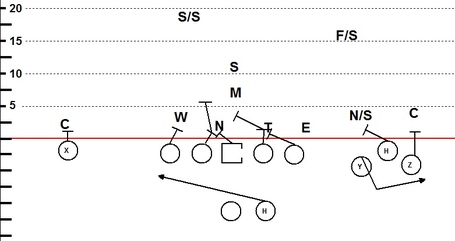 Tech is in a 3x1 formation, with a bunch set to the right. The running back is to the QB's right. Here's the first little trick. Putting four offensive skill players to one side of the field typically indicates that the play is going that way. In fact, one of the options on the play IS to go that way.

The defense is in a 3-man front with a nickel coverage look behind it, kind of a 3-3-5, or maybe the end man on the line of scrimmage is just a standup defensive end, either way, it doesn't matter much. They present Davis Webb with a 6-man box. THIS SCREAMS TO RUN THE BALL. This is Webb's first read, the "box."

Webb reads a favorable box to run it, and he's right. A 6-man front is generally a pretty favorable front to run against.

In this case, if the defender freezes to contain the QB, the handoff is made and he's taken himself out of the play by just standing there. If he crashes down towards the running back or mesh point (point where the QB and RB meet to handoff), the QB pulls the ball. In this instance, the read would be to throw the screen. In the play, the defensive end split the difference. He didn't just stand there to contain the QB, but he didn't crash to the mesh point. Either way, Webb made the correct read, especially considering the box.

Now, let's look at the offensive linemen. Starting from right to left: the RT, Reshod Fortenberry, left the end unblocked and combo blocked the tackle with the RG, Baylen Brown. The RG doubles up on the DT, and should move downfield once the RT has secured the DT. In this instance, Brown and Fortenberry just maul the DT and the linebacker Brown would have blocked stepped up into the line of scrimmage (why on a sweep play? Don't ask me.). The C, Kaster, and the LG, Morales, combo block the NG and Morales breaks off to grab he other LB to seal him from getting to the outside. The LT, LeRaven Clark, grabs the defender on the end and turns him back to middle of the field, sealing him off from making a play. This mass of bodies ends up taking the linebackers out of the play (for the most part), even though they weren't blocked that well. This leaves all of the possible defenders to make the play: the CB opposite Devin Lauderdale and the two safeties.

On the snap, Lauderdale runs to the inside like a really shallow slant. The CB is in man so he's just following Lauderdale, and by the time he realizes that the running back has the ball, he's already getting past him. Lauderdale moves onto his next target, the playside safety. He seals him off and knocks him to the ground, all the while keeping himself upright. The other block Lauderdale makes is actually on a linebacker that trailed the play; the LB that Brown was supposed to reach to but never did. The only other defender involved in the play is the backside CB, but he was only able to get involved because the play spanned so much of the field and Reginald Davis let up on his block once Justin Stockton broke around the LT. The CB covering Lauderdale trails the whole play, but wouldn't have really been a factor (and wasn't) if Stockton didn't have to slow down and make those cuts.

Now obviously, the run here worked and it worked really well. The line did their part, especially Morales and Clark, sealing off their men. Webb made the right read to hand it off. Your star of the play, though, was obviously Devin Lauderdale. I'm not convinced that the defense would have caught Stockton without Lauderdale's blocks, however, he certainly made sure that the guys he could reach weren't going to have a chance to make a play. Davis, on the other hand, could have controlled his defender a little bit better, but in the end, it didn't end up mattering.

Without seeing Webb make the other read to throw the screen, it's hard to tell what factors would have lead to that decision. Webb mentioned in the press conference on Monday that he probably could have thrown the screen to Grant and it would have worked for a medium gain, assuming the unblocked safety on that side of the field could have tackled Grant one-on-one in the open field. But what we got was a spectacular example of this offense using a little deception with formation and running concepts of an old play, the read option.