Texas Tech announced that Coach Kingsbury has agreed to a contract extension through 2020 making him the 4th highest paid coach in the Big XII with an average salary of $3.5 million per year.

Share All sharing options for: Kliff Kingsbury agrees to contract extension through 2020

Friday afternoon Kliff Kingsbury signed a contract extension with Texas Tech to coach the Red Raiders through the 2020 season. The contract is loaded with incentives and addresses the possibility that Kingsbury at some point might leave for the NFL, but for now lets just enjoy. Here is a picture of Kingsbury signing the contract with a plethora of Sharpies at his disposal. 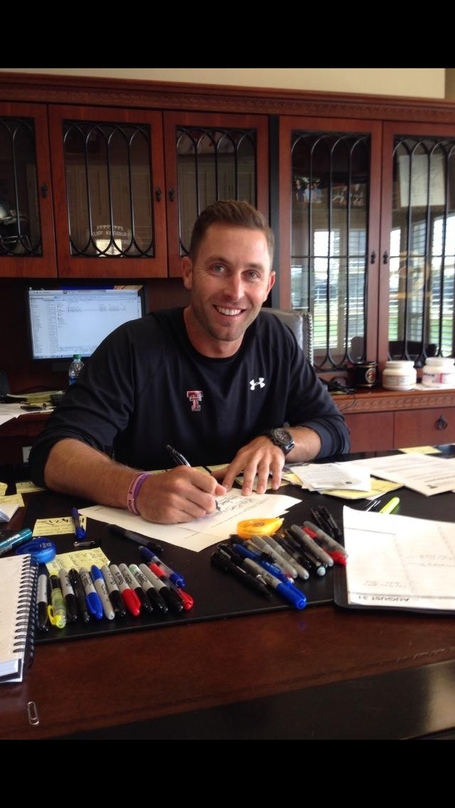 And here's the announcement from our friends at Double T Insider:

Kliff Kingsbury (@TTUKingsbury) has agreed to a contract extension and will coach through the 2020 season! #WreckEm #LetsGetWeird

and the great student-run newspaper at Texas Tech, the Daily Toreador:

Kliff Kingsbury has signed a contract with Texas Tech that will keep him at the school through 2020. (Via @BlayneBeal)

And from the indefatigable Blayne Beal:

We will have full details on his contract extension soon on http://t.co/8USyyd26zo.

Our friend Bruce Feldman at Fox Sports has a few of the preliminary details:

After a strong first season capped off by an impressive bowl win over Arizona State, Texas Tech has rewarded head coach Kliff Kingsbury with a robust contract extension. The new deal, which will run through the 2020 season, has a guaranteed total base of $24.2 million. Including this season Tech will pay Kingsbury an average of $3.5 million per year, sources tell FoxSports.

Kingsbury, who signed the deal Friday afternoon, becomes the fourth highest-paid coach in the Big 12 behind Bob Stoops, Art Briles and Charlie Strong. The deal also affords the charismatic 35-year-old to earn as much as an extra $1.5 million in bonuses each year, according to sources. Kingsbury can max $34.7 million over the length of the contract.

A couple of the unique aspects of the contract: Kingsbury still will have creative control over the team's uniforms and also will make an additional $250,000 if he coaches a Heisman Trophy winner. Prior to getting the Tech job, Kingsbury helped propel Texas A&M redshirt freshman Johnny Manziel to the 2012 Heisman as the Aggies' offensive coordinator and quarterbacks coach.

Texas Tech brass and Kingsbury's agent Erik Burkhardt were in negotiations for the past six to eight weeks working out the deal.