For Parrot Heads, Every Day is Glorious

To help shake the cobwebs left from an exhausting NBA Playoffs, my wife and I went to Frisco with friends to take in the sights and sounds of a Jimmy Buffett concert. It was middle-aged Hedonism on full display, and it was spectacular.

Share All sharing options for: For Parrot Heads, Every Day is Glorious

In the RV space immediately in front of ours, the family that camped out all weekend for the concert decided to make it a grand celebration and surprise their daughter with a brand new corvette for her 16th birthday. Naturally the car was an easy conversation piece hidden in a parking lot that was full of them.

The parent's gesture was an apt microcosm for the events that unfold nearly every weekend during the traveling circus that is a Jimmy Buffett concert. An over the top, ridiculous, even a bit dangerous act shrouding what is ultimately an expression of love and affection mixed in with a helluva lot of fun. 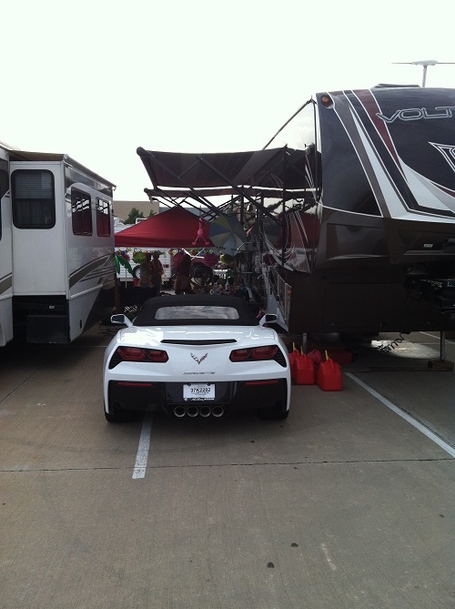 In 1973 Jimmy Buffett was inspired to write a song about a Mexican borne, tequila infused drink after indulging in several one night in an Austin bar. Today, Margaritaville is more than a song, it's an empire. According to an 2013 article in the Daily Mail:

Jimmy Buffett's most famous song, Margaritaville, is an anthem to being drunk and lazy on the beach.

However, through a lot of hard work and industriousness, the 66-year-old beach bum has turned it into the most lucrative song in the world.

The four-minute Margaritaville, with just 208 words in its lyrics, is the basis for Buffett's massive empire of restaurants, casinos, resorts and merchandise - bringing in, conservatively, $100million a year in revenues for the singer.

By some accounts his business ventures have made him the third-richest singer in the world, with a reported net worth of $400million - more than Elton John, Mick Jagger or Sting.

But above all else, Buffett and his songs have inspired millions to anxiously watch the office clock on Friday afternoons, daydreaming and biding their time until they can finally escape the real world and don a coconut bra and grass skirt for the weekend with thousands of their closest friends. And that's just the men.

So even if it's only a brief escape, it's the life that Buffett created for millions of grateful Parrot Heads almost 40 years ago, and his drunk and lazy anthem is still going strong. 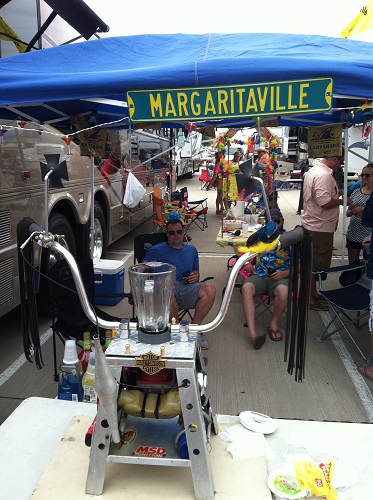 We walked through the rows of RV's and trailers that descended upon Frisco sometime during the week to prepare for the show. There was the gas powered blender that stirred a fresh batch of sloshy green margaritas while the operator hit the throttle to rev the engine and presumably swirl the concoction down the throats of women that were brave enough to stick their mouths on the lip of the glass while the little mini-engine roared.

A few rows over there was the group of older women that were outright giddy at the chance to play a game that required them to fasten a cartoon-like inflatable appendage to their waists while the others threw large inflatable rings at them. The object was to hook the rings on the aforementioned appendage in hopes of winning a paper lei or a shot of homemade Bloody Mary.

Then there was the group of younger men dressed in saggy shorts and wife beaters that waited in line to play the game and were confusingly good at it. It was almost as if they'd practiced such a routine in the past.

But however they developed their skill, this story isn't about them. This is the story of my Parrot Head friends and what they--and thousands of other Buffett fans--taught me that weekend.

Jim married Diane five years ago in Florida and we were all there. They are without a doubt the nicest, most genuine people I've ever known, but Jim also has a delicious wild streak that surfaces on occasion. This entire trip was his brainchild because he wanted to celebrate his 40th birthday in style. He rented an RV and set up camp on Friday morning with a few friends.

When we got to the RV on Saturday he was wearing a straw skirt and a Flavor-Flav clock around his neck that doubled as a margarita canteen. While the women sat in the RV alternating between pillow fights and figuring out a way to shut down the water supply and clog up the toilet, Jim and I sat out in the parking lot with the rest of the guys catching up.

We traded war stories and shared our self inflicted troubles. I told him about the recent Saturday when the Spurs beat the Thunder in Game 6. Keith and I celebrated a tad too much and I woke up on Sunday morning with the sun burning a hole in my face and no idea where my shirt was. I looked for two weeks, afraid to ask where it might be because that would be the ultimate sign of admission. "Man, that's nothing," Jim said. "On St. Patrick's Day I lost my boots for a month." Then he added, "oh, and I also lost my bagpipes."

Dave is the guy that's in charge, even when he's not. At Jim and Diane's wedding he and I spent the entire day before the ceremony combing the Florida Panhandle for things we could burn to celebrate their pending nuptials. He's a former Saddle Tramp from East Texas but in the last few years he's developed a beautiful Nawlens-creole drawl that he weaves in and out of during conversation. Over the weekend I learned that Dave buys lots of things that cost fuwhdee or fidy dollahs. And some things cost up to fo hundrid dollahs.

He also has a knack for convincing prison inmates to make him things. Whether it's a hand tooled leather wallet with an old school Double T, or a charcoal painting of the Masked Rider, Dave gets it.

So it was no surprise when Dave befriended a homeless looking man who happened to have three jars of moonshine in his backpack. His was a startup company and he was looking to spread the word about his corn mash. He had a berry flavor, regular, and the West Virginy styled, 181 proof white lightning.

"Which one do you wanna try," he asked me. "Let's see--181 proof moonshine, in a jar, tucked away in what could possibly be a homeless guy's backpack?" I thought.

"I'll have a pull of that one," I said as I grabbed the jar.

I think I coughed out a "smooth," after taking a bigger than necessary gulp, but at that moment I was also floating above the parking lot shooting thunderbolts from my fingertips and fireballs from my ass. So I might not have said a word and just handed the jar back to the homeless guy. The five minute meeting is a little foggy now. 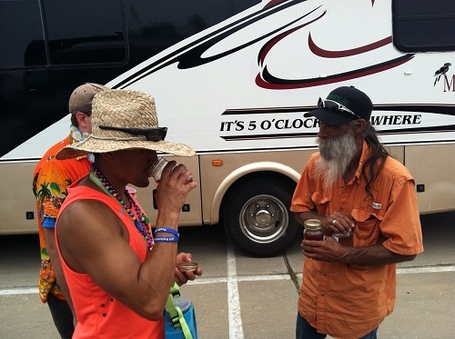 Tyrone is the guy with the welcoming smile and a seemingly endless supply of Jell-O shots. He was like Santa with his never empty bag of Jell-O (and pudding) shots, handing them out tirelessly to all passers-by. At one point in the afternoon a much-too-skinny-to-be-healthy girl and her three friends wandered over to our site and asked for a beer. "FIVE DOLLAHS," Dave yelled at them. But I felt charitable and gave them a handful of Tyrone's pudding shots. They looked at the plastic cups quizzically, as if I was handing them barbeque sauce. I convinced them to try, and they lapped the chocolate from the cup like kittens. All four had a dab of chocolate on their noses when they finished and we sent them on their way without a word.

A bit later a young guy wearing a burnt orange UT wristband, some variation of an Affliction t-shirt and those new style jeans with rhinestones and larger than necessary pocket decorations came over with two girls. Tyrone immediately set them up with handfuls of jello and evil pudding. Affliction Longhorn asked for the trash can and started flashing hand signs, yelling "HOOK 'EM" when he saw all the Tech and OU chairs situated around the site. We asked if he actually attended UT as we encouraged him to leave.

The show was scheduled to start at seven so we convinced Jim to keep his shorts on under his grass skirt and had everyone rounded up and headed to the stadium by eight. On our way out we marveled at Affliction Longhorn who had discovered the Corvette across the way and was entertaining everyone in the parking lot by dry humping it from behind.

We grabbed a couple of beers and found our seats just as Buffett took the stage. I don't know what I was expecting, but his energy and showmanship was a pleasant surprise. For a guy that's sung those songs thousands of times all over the world his enthusiasm was fantastic. He approached the show with the vigor and intensity of someone performing for the first time.

And as someone that's learned to appreciate the power of words, I'm in awe of moments like those; watching the entire stadium sing along to lyrics written four decades ago. It has to be rewarding on so many levels to know that those words scribbled out on a piece of paper can bring so much joy and pain to millions, depending on the circumstance.

The subtle aroma of smoke from cigarettes only legal in two states rose from several rows below our seats and wafted through the crowd while the melodic rhythm from Buffett's most famous island songs poured over us. About an hour and a half in Buffett finished his first set so only the perfunctory encore remained. The wives decided to head back to the RV so Jim, Tyrone and I locked arms and sang "Why don't we get drunk and screw?" in the encore with the Coral Reefers and to each other in our loudest voices, knowing the show would soon end.

When the show wrapped we headed back to the RV. I fixed a drink and grabbed a cup of taco meat for the road because Uncle Wayne was on his way.

Wayne is Lisa's uncle and Lisa is one of my wife's oldest friends. She also happens to be a proud New Deal Lion and Red Raider. Instead of taking a cab back to the hotel, we planned to hitch a ride with them.

Uncle Wayne is one of those guys that you fall in love with immediately. I want him to move to San Antonio so he can raise my kids and fix us margaritas. Such a nice, easy going guy who was content to listen to our stupid stories and drive us safely home. And as is her wont, Lisa called her mom from the SUV and put her on the speaker. Lisa's mom and Wayne's sister sleepily but promptly told us that we are too old to be doing crap like that. She's probably right.

But nonetheless, Uncle Wayne delivered us to our hotel in Plano safely. And in true Parrot Head fashion, we were sound asleep by 11:30.

It was a long, yet rewarding day for all--biped or otherwise. 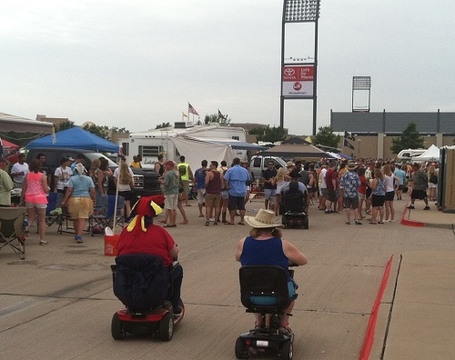 So on Sunday afternoon as we drove into San Antonio and just before we stopped at Target to buy the kids souvenirs from the trip, Bruce Springsteen started yelling at me from the radio about glory days gone by. His song was the perfect juxtaposition to what I'd seen the day prior.

Springsteen's lament made me realize that I'm happy to be surrounded in life by friends like Jim and Dave and all of Buffett's Parrot Heads. Because instead of gathering to reminisce about the glories of days passed, it's much more fun to continue living them out.