I'm starting a mini series looking at 3 plays where Tech's defense was good, bad, and down right ugly to better understand why it worked, why it didn't and what broke down for such epic failures in 2013.

Share All sharing options for: Matt Wallerstedt's 3-4 Defense: The Good, the Bad and the Ugly 2013: Part 1

To kick off this series, I've got the first 3 plays that popped into my mind when I first started thinking about a Good, Bad, Ugly series. I have other plays in mind for future installments, but as always, let me know which plays you want to talk more about. Let's get to it.

First up is a crucial stop in the TCU game from back in September.

As we have previously discussed, this 3-4 defense is a 1-gap defense, meaning that each defender in the front 7 is assigned a gap in run situations. You aren't counting on your defensive linemen clogging up the line, probably because Tech's defensive line COULDN'T demand double teams last year. This may change with the arrival of some of the big boys up front this summer.
Anyways, you see that TCU is lined up in the diamond formation. They have run from this formation previously in this game and Tech is obviously expecting them to do the same here, only needing one yard. The front seven is condensed along the line because they're a 1-gap defense and they are expecting run all the way. You see Raider is outside the right tackle. The End is responsible for the B gap on the right (between guard and tackle). Middle linebacker comes up and takes the A gap on the right side. The Nose has the A gap to the left side. Will linebacker stays back to read the flow of the play. The Tackle has the B gap on the left. Bandit has the C gap, or outside the left tackle. The safeties are about 6 yards off the line at the snap and the corners are in man, in case. With all of the gaps filled, the runner has no where to go but outside.
Bandit beats the left tackle to the outside, forcing the runner back inside, also creating a hole for the defense to collapse into. You see the TCU line on the left didn't get that great of a block on the tackle (who could, it was Hyder in this play). That hole is quickly filled by the Will backer as well as the boundary safety for the tackle for a loss.
You could essentially run this same play from a defensive standpoint from a 2-gap defense where all of the linebackers would be free to flow to the ball. This slight philosophy shift may happen once Tech has a nasty nose tackle, forcing runners to the outside. But to accomplish this last year, Wally had to being backers.

This is the deep bomb on a playaction pass against Oklahoma in October. smh...
First off, this lapse in coverage comes from 2 things as far as I can tell. 1) unusual formation from OU with the stacked receivers outside and 2) taking advantage of Tech trying so hard to stop the run.
It took me a few times, but both cornerbacks are stacked on that side of the field as well. The middle linebacker is on the line of scrimmage showing blitz, there is a covered TE (making him an ineligible receiver) and then a full back lined up in a wing formation behind the TE. This formation should scream power run to that side. You don't ever expect a team to make a receiver ineligible and yet still throw it. Here's what the formations looked like at the snap of the ball: 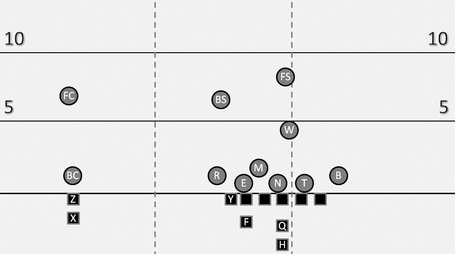 I would expect Wally and the defense was thinking run. About this point in the game, OU was starting to put the pieces together on the ground and Tech was committed to trying to take that away. The safeties aren't even 10 yards deep and at least one of them, Austin Stewart from his Boundary Safety position bites on the play fake (and he bites HARD). By the time the ball gets to the receiver, you don't even see Stewart in the frame, that's how far behind him they got. And it certainly didn't help that a zone coverage was called having the safeties' eyes in the backfield.
Bruce Jones at the BC position attempts to get a bump on Saunders and Saunders just breezes past him. You can see him even coast to allow the throw to catch up with him and Jones wasn't making up any ground. I'm sure Falemi running into Jones as he flailed at the tackle attempt didn't help (sarc font).
This play was setup with Tech's preconceived notions of stopping the run from this kind of formation, as well as trying to stop OU's success on the ground, which they were just coming into at this part of the game. Gotta tip your hat to the game planning and execution on this play. We'll get you next time, Land Thieves.

I just...don't...even know. Bad all the way around. That's why this play is this week's Ugly.
This one hurt, all the way around. Tech fell down 21-0 early. Clawed their way back into the game. They needed this stop to get the ball back and try to put the ball into the endzone, but then this ugly happens.
Appears it was a zone coverage, which is why this one hurts. It's 3rd and long (9 to be exact), defensive backs are looking into the backfield so they should see this and at least 3 of them do see it. And then you get the typical Tech defensive reaction, BAD angles and even worse tackling technique. This was the proverbial nail in the coffin.
I just don't even know what else to say. It was a breakdown all the way around. I don't mean to keep picking on Stewart, but he HAD Chelf in his arms at the line of scrimmage. Porter was next in line at bad technique as he took a bad angle and the only thing left in his mind was to drop at Chelf's feet. Uh uh...didn't work. There wasn't anybody left in the back of the defense as they were spread too far apart and couldn't seem to get around other Tech defenders and the OSU receivers.
This one hurt me to watch to write this. Sorry to drudge up such painful memories for you all as well. But hey, misery loves company, amirite!?