Matt Wallerstedt's 3-4 Defense: Coverages and What They Look Like During the Game

After looking at drawings of the plays last week, let's look at what they will look like on the field in real time.

Share All sharing options for: Matt Wallerstedt's 3-4 Defense: Coverages and What They Look Like During the Game

This, ladies and gentlemen, will be the practice session of our theory/practice discussion on Texas Tech's 3-4 defense, coverages and what they look like.

I grabbed a few gifs of plays from the Holiday Bowl to demonstrate what I was talking about in the last post and how you would be able to determine what the plays look like live. I used TubeChop to grab the gifs (on suggestion from Seth, so if they don't work, let's all just blame him...although it certainly seems to be working better than gifsoup). 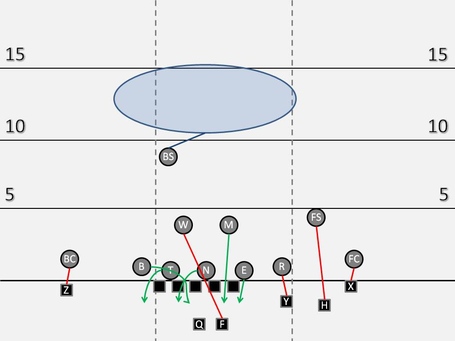 First up is a simple man blitz. You see the corner up tight on the line of scrimmage, the linebackers are showing blitz, and do (with the exception of Will Smith). There's a little bit of a twist up fron with the line with Pete Robertson coming all the way inside to the middle and Sam Eguavoen blitzing in the A gap. You see Terrance Bullitt covering an inside receiver as well as seeing Tanner Jacobson come down over another slot receiver. It looks like cover 1 over the top but it's hard to tell what Keenon Ward is doing because he is never in the shot with the quick throw. Smith doesn't blitz because the man he is assigned to isn't staying in to pass protect. Smith sees him slip out into the flat and Smith tracks him down to force the punt and end the drive. 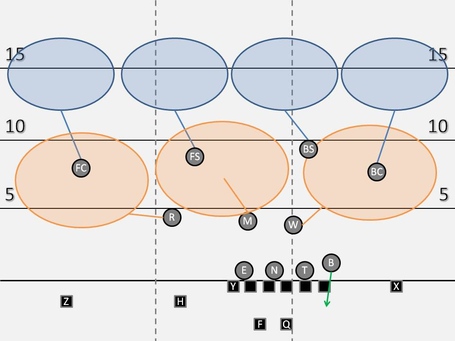 Like I mentioned in the first post on coverages, when you see the corners 7-10 yards off the line of scrimmage, chances are they are playing zone.Also, if you see the defense look like it is can be separated into pretty definable layers, like the defensive line, linebackers and back four, you've probably got zone. Once the ball is snapped, if those layers seem to move in unison, you've got zone. In this play, you'll see the two middle linebackers and Raider drop back almost in a straight line, creating an almost parallel line to the line of scrimmage. The back four drop into deep quarters coverage. You'll see Bullitt ride his slot receiver to disrupt the timing and reroute the receiver. The ball ends up being thrown deep to boundary side (Bruce Jones cover Jalean Austin). 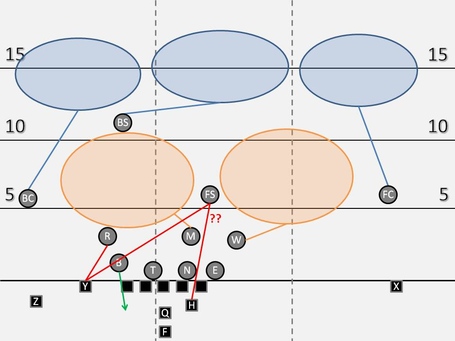 So I listed the video as a cover 3, which it is, but when I was going back to do the play art, I wasn't sure what I was looking at. First off, the corners' hips are turned in, looking at the QB and they are lined up 7ish yards off the LOS. I think zone. I see the LBs take a step up on the snap (on playaction), but back out when QB keeps the ball to throw. I think zone. But then I don't know what the F bandit and the Field Safety are doing. First off, when you look at the alignment at the snap of the ball, Bandit and Raider are lined up on the same side of the field. In fact, Raider is basically stacked directly behind Bandit. Next, the FS creeps into the box, albeit deep, and at the snap of the ball takes more steps in towards the LOS. I think his original assignment must have been H coming out of the backfield. Only thing is, H breaks off to the left flat. Raider is in man all the way on Y. When the FS sees H break off towards the flat, he also looks to go into man against Y. I'm not sure. Maybe this is some form of man/zone combo. If it is, I'm not sure I have heard of this before. Or maybe somebody missed an assignment, but I don't know who. Maybe I shouldn't have included this, but I thought I'd show you what a cover 3 looks like. You get one safety dropping into the box, while the two corners and the other safety drop into deep thirds.