An Open Letter to Hollywood

Why are our efforts being ignored?

Share All sharing options for: An Open Letter to Hollywood

While we found it rather easy to secure interviews with David Ubben and Hanz the bell ringer, landing an interview with an A-List Hollywood celebrity has been rather difficult. For every ball or Pierre the Pelican that graciously sat down with us, there's an uptight publicist for Aziz Ansari or Jonah Hill that don't even bother to look deep into our resumes before letting us know their star isn't available.

We bring our best to you, Hollywood. In each request we show you how qualified we are. We let you know:

Yet still, nothing. Nothing from representatives for Zach Galifianakis, Javier Bardem, Mike Judge, Danny McBride or even freakin' Kevin Dillon. Seriously Johnny Drama? You don't have five minutes?

So then we tried to get your attention from the inside. We joined the site IMDb in hopes that you would see us. We listed our skills and work credits. We're not sure who wouldn't want a writer with a southern accent that can play the trombone and has film credits that include "Wake Up With Waffles," but apparently you don't because we haven't heard from you. 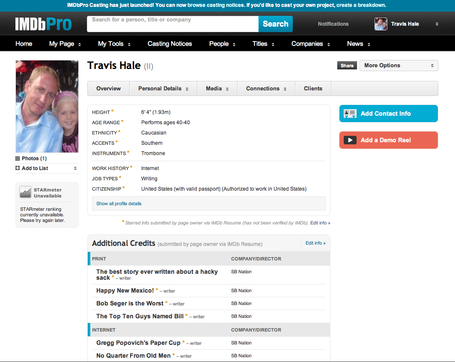 For a brief moment we thought maybe it had worked when we got a reply from Sylvester Stallone's representatives, so we got cocky and went straight to Twitter.

But you're a cold mistress, Hollywood. You tease us with a reply that our Rocky Balboa Can't Whisper story is appreciated, but then break our hearts a few sentences later letting us know that even the great Sly doesn't have time for us.

We've tried everything, Hollywood. Hell, we even dropped a dope Jay-Z beat in the middle of this story for no reason whatsoever, just like all the songs on the radio today. If that doesn't prove how cool we are then we don't know what will.

So keep ignoring us if you like, Hollywood, but we'll never give up. You'll never break our spirit. And years from now, when we publish our exclusive interview with Pauly Shore, we know you'll be sorry.