An introduction to Texas Tech's 3-4 defense, starting with the defensive line.

Note from Seth C: Hey everybody, please welcome DoubleTFaithful to the fold. He's written a few terrific Fanposts and we like smart people that like to write.  Fin.

Let me just put this right up front: I do not claim to be an expert on Matt Wallerstedt's defense. What you see here represents my opinions based on observations and research, you know, since we actually have an established system that we've seen the year prior for the first time in what feels like millennia.

Over the next couple of weeks, I plan on breaking down and reviewing the Texas Tech defense highlighting key plays, formations, shifts, etc. to help you better understand why things are going well, or why they may be not going so well.

First up is the defensive line.

Below is a defensive alignment out of the base 3-4 package facing a fairly normal offensive formation that you are likely to see from Oklahoma, Oklahoma State, Iowa State, Kansas State (although theirs will tend to favor more to the traditional I formation) and maybe TCU. It has a fairly defined strong/weak side, as well as being nearer to one hash to simplify naming the defensive positions. This would be one of my preferred formations if I were a balanced offensive team with versatile tight ends and a bigger running back/full back (plus I LOVE the pistol). 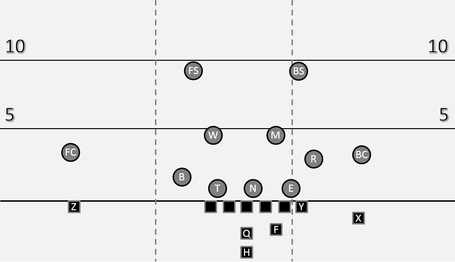 Starting up front on the defensive line, from left to right in the picture, you have the tackle, nose and end. *Note that all heights and weights were pulled from most recent depth chart, recruiting profile or bio on Tech's website.*

Your tackles are ideally going to be 6 foot plus and somewhere between 270 and 300 pounds. He will line up as a 3 technique (more on that later). He will typically be going against the backside guard and/or tackle, depending on what the Bandit LB is doing. He's here to control cutbacks, counters and misdirections from the RB and to fill a passing lane/collapse the pocket. Based off of the latest depth chart, your two deep here are Demetrius Alston (6'3 260) and Keland McElrath (6'5 280). JUCO signees Marcus Smith (6'3 315) and Brandon Thorpe (6'5 270) may also end up here. If Kerry Hyder and Rika Levi played on the same team, this is where I think Hyder would have thrived.

Your nose tackle is going to be the big space eater. In a true 3-4, this is your 6 foot, 300 pound plus that forces double teams, collapses the pocket and redirects the RBs. He will line up in a 0 or 1 technique. Think Louis Nix (6'2 342) of Notre Dame. Current depth chart has Jackson Richards (6'4 275) and Donte Phillips (6'2 280) here. Both are seriously undersized, in my opinion. Anthony Smith (5'10 325) would also be here if it listed more than 2. JUCO signee Rika Levi (6'2 350) figures to roll in and immediately factor into the rotation at this position. Marcus Smith may see time here as well. Levi may be in for first and second downs or obviously run situations, whereas Richards may spell him in passing downs. Ideally, I would want to see Richards over at tackle because of his size and skill set but the coaching staff likes him here. And who am I to argue with them?

Finally, your end is more of your prototypical 4-3 end. He will line up in a 5 technique and control the edge. He will typically be the lightest on the line. The depth chart has Branden Jackson (6'4 240) and Zach Barnes (6'3 215) here. JUCO signee Brandon Thorpe may also float down over here for a bigger front. Gary Moore (6'5 220) is also practicing here.

The above was a screen grab taken during this past year's game vs Oklahoma. This was is just a quick example of what the base 3-4 ACTUALLY would look like on the field. On the line, you've got Branden Jackson at End, Dennell Wesley at Nose and Kerry Hyder at Tackle. You can see the two outside linebackers pressed up on the line, Pete Robertson at Bandit and Terrance Bullitt at Raider, with Sam Eguavoen at Middle and Will Smith at Will. In the defensive backfield, you've got Bruce Jones at Boundary Corner, Tre' Porter at Boundary Safety, Austin Stewart at Field Safety (lined up over the slot receiver) and Derrick Mays at Field Corner.

Now, back to that numbered technique thing I referenced above. Defensive linemen are assigned a "gap." These gaps align with their position, and will be the target destination for any twists.

When you compare this to a 4-3 front, which has two 5 technique ends, a 3 technique tackle and a 1 or 2 technique tackle, you can see there is a larger gap between the nose and end in a 3-4 (with a 0 tech). This is where the size of the nose tackle comes into play because he should be occupying two offensive linemen, the center and strong side guard. The middle linebacker will play over this gap between the nose and end to help in run support to the strong side.

Next week we'll touch on the linebackers and how the two hybrid linebackers really make this defense flexible.