A first-hand account of the craziness that is the Lubbock Lions Club Annual Pancake Festival.

Share All sharing options for: The World's Largest Pancake Festival

According to their website, the Lubbock Lions Club "hosts the largest pancake festival in the world" and currently holds "the world record for the most pancakes served in an eight hour period by a non profit organization."

Buck Russell would be proud.

My wife and I attended the Pancake Festival a few years ago, but we opted to go in mid-afternoon, which is a bit of an off-time during the 7am-8pm feast.

This year, however, we dove head first into the madness.

10:15am - We scoured the lot and found one of the few remaining spots in the very northeast corner of the Civic Center parking lot. Our odyssey began.

10:20am - The line for the 62nd annual festival was a sight to see; miles and miles* of people stretching from the main door to the edge of Mac Davis Lane. We took our place at the end of it in Hale County. 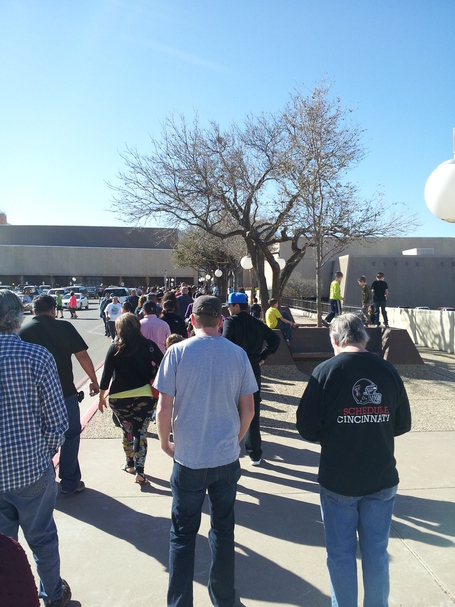 10:22am - There were rumors and rumblings among the syrup-entranced townspeople, including talk of an hour and a half wait. Ninety minutes, you say? Surely not.
Alas, our worst fears were confirmed when a gentleman in official Lions Club regalia stated the wait was, indeed, one hour and twenty minutes. Sure, a precious ten minutes were dismissed in a dash of confidence, but eighty remained.
The comments from the yellow-vested man prompted a large group in front of us to abandon ship and take solace elsewhere (The Pancake House, I believe). Even the pictured "Schedule Cincinnati" wearing pancake aficionado knew that sticking around might not be worth a river boat gamble.
We trudged onward.

10:30am - Somehow, someway, we survived the ten minute march in the oppressive sun and entered the safety of the Lubbock Civic Center. We were then greeted with an even longer line, a giant U-shaped chute towards batter bliss.

It was then that I realized we needed Benjamin Franklin Gates to direct us toward the hidden tunnels which are, as everyone knows, located in all public buildings. He was nowhere to be found.

10:40am - A woman selling raffle tickets approached. I beckoned. One dollar per ticket was all that stood between me, a 50" TV, or a Kliff Kingsbury autographed football. I took on this gamble with gusto and purchased five chances.

10:41am - While filling out all of the necessary raffle ticket information, I heard our first glimmer of real hope. In the distance, a mariachi band began to play. It was music to my ears.

10:44am - We rounded the last corner of our U-shaped corridor and got our first glimpse of the band; we recognized them! Such a welcomed familiar face! Mariachi Amistad was there to serenade us on the final leg of our journey.

(Side note: Mariachi Amistad is incredible. They play at the Buddy Holly Summer Showcase every year, and we always make a point to see their show.) 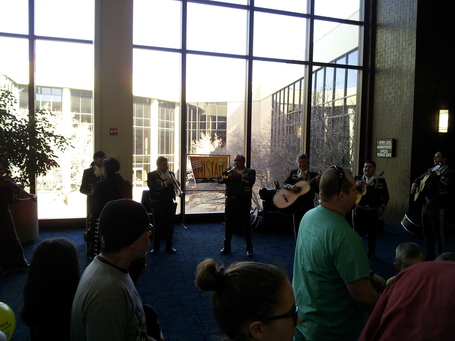 10:48am - Temptation arose. Within smelling range of the Exhibit Hall doors, we were greeted with signs urging us to purchase tokens. Tokens for strawberry or blueberry pancake toppings, cotton candy, popcorn... tokens for bacon.

Is this not a cruel joke of sorts to tempt us weary travelers with such fantasies that only exist beyond the doors? Is there someone out there older than age seven who eats pancakes for breakfast only to think that cotton candy would be the perfect way to complete this meal? What does it all mean??

10:53am - The Exhibit Hall was beautiful. Packed tables as far as the eyes could see. There was a haze of griddle smoke and pancake batter so thick that I could taste it. Off in the distance, there were three quick rounds of a "Raider Power" chant. I felt rejuvenated.

10:56am - Now, we stood directly in front of the griddle. It was a happening scene with volunteers and Lions Club members diligently flipping these breakfast delicacies.

11:02am - Pancakes in hand, we selected our beverage, choosing carefully between the options of milk, water, coffee, and Andy Griffith-approved "orange drink." 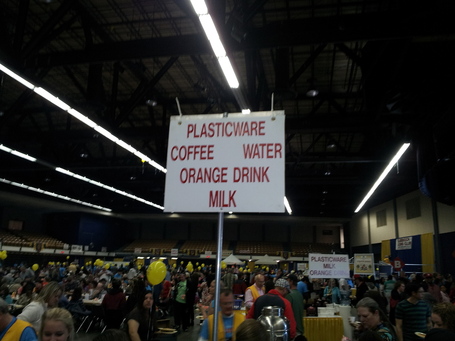 11:04am - At only forty-four minutes into our excursion, much less than the expected eighty, we were seated in front of a plate of two perfectly cooked pancakes and two sausage links. We ate like kings, and were serenaded with Girl Power Country hits by two sisters and a karaoke machine. As the likes of Lady Antebellum, Carrie Underwood, and The Band Perry flooded our ear drums, so did the syrupy sugar cakes flood our bellies.

11:16am - An announcement was made: there was a missing child dressed in a black Texas Tech t-shirt. The boy was soon found, and the singing resumed. #wreckem

11:20am - I found myself in the griddle line again for plate number two. As I waited, I witnessed a young boy who, when handed his plate of pancakes and two sausages, turned too hastily with glee only to see one of the sausages fall on the concrete floor below. The lad, without much hesitation, decided to enact the Five Second Rule. Within Three Mississippi, he had it off of the ground, blown clean with Nintendo game cartridge precision, and back on the plate.

The "slow clap" was invented for moments such as this.

11:25am - My second helping of this maple syrup covered confection was accompanied by the Dixie Chicks version of Landslide and a not-so-big orange drink.

11:35am - As we made our exit, the sounds of Miranda Lambert filled the air and the smell of popcorn and cotton candy filled our lungs.

11:36am - We encountered a gentleman in the parking lot wearing this shirt.

Thank you Lubbock Lions Club, Wolf Shirt Guy, No Sausage Left Behind Kid, and many others for making this the best Pancake Festival to date.