Pitbull, P Mo and the Fog.

Mr. 305 came to the San Antonio Rodeo to rock our faces. In the process, he taught us a valuable lesson.

Share All sharing options for: Pitbull, P Mo and the Fog.

P Mo and the Fog are friends of mine. We work together on the 3rd floor of an office building not far from the San Antonio airport. Both of them live south of San Antonio in Pleasanton, or as they call it "Plen-tun," and commute to the office every morning. They are country boys like me.

If every employee on our floor was instructed to line up shoulder to shoulder and a neutral observer was brought in to pick out the three most likely to be small town country boys, the observer would likely choose the three of us.

This partnership has been inevitable. These two Godzillas have been circling each other on the airwaves for years, and we've been mere spectators. They finally entered into a binding agreement to take over the planet and VTM has a copy of the contract. It is Dante's fourth circle of greed. "Lasciate ogne speranza, voi ch'intrate"

Let's host the NBA All-Star Game during the rodeo

Pitbull could ride a bull in a pit and sing his songs.

The Fog likes to eat tuna, straight from the can.

The Fog is a health nut. He works out every day and eats cans of tuna. Sometimes he'll come in my office to eat because he doesn't like to have the smell of tuna in his office. The Fog is particular about the things he smells so we'll sit and chat about country things mostly, while he eats his tuna. Then he'll throw the can away and leave, but I don't mind.

P Mo likes to go to Academy and look at fishing lures.

I don't know if he's ever bought one, but he's there just about every day, admiring. I've been there with him a few times and we stare at the fishing lures and admire their beauty until its time to head back to the office. He's also a natural story teller so he often regales us at lunch with tales of fishing trips gone bad, or a boat he saw, or the time his dad put a green blanket over his head and somebody thought he was a monster. His stories are pretty random, and can sometimes end our lunch prematurely.

Both are good guys. We hit it off from the beginning, with only a few snags that I can recall. We were coming back from lunch one day, listening to Don Williams and I mentioned he was from Floydada. You woulda thought I said Plen-tun was just like Austin and their women were jealous of the sheep as fast as that truck stopped. They were gonna make me get out and walk back to work. Don Williams is from Portland, Texas they growled at me. I negotiated my way back in the truck and we googled it once back at the office. Turns out we were all partially right. Williams was born in Floydada but lived most of his youth just outside of Corpus Christi.

Another time the Fog got really mad at me for eating my taco salad bowl. As previously mentioned, he's a health nut.

So I was excited when I found out they'd be at the rodeo with their wives to get their faces rocked by Pitbull, just like me.

I snuck out of the office a little early on Wednesday, met my wife and kids at the house and put on my Marty Stuart t-shirt and Tech visor. I paced the living room while my wife got ready and finally we were off to the AT&T Center. 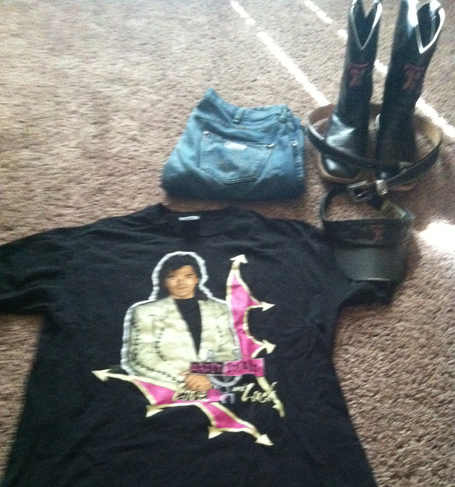 The rodeo started at seven but we didn't get there until about 7:15. Found a parking spot and found our seats. We watched steer wrestling and mutton busting, and then headed out to find P Mo. We ran into the Fog and his wife in the concourse and had a few beers. P Mo called and said he was down at the Saddles & Spurs bar where the rich people and rappers hang out. We didn't have tickets to get in but the Fog had his Barbeque Committee pin so we made him put it on and jumped in the elevator. The usher asked us for our tickets, but the Fog just cooly pointed at his pin and she waived us through.

After a few more beers the Fog asked if I wanted to feel his muscles. Of course I did. -Things that happen at a Pitbull concert

After a few more beers the Fog asked if I wanted to feel his muscles. Of course I did.

Here we were, three country boys at the rodeo with our wives, completely missing barrel racing and bull riding so we could hang out with all the rich people and rappers. It was awesome, but as the bull riding wrapped up we headed back to our seats to get ready for the main event. On our way to the elevator the Fog said he buys all his clothes in Lubbock because they have the best stuff. Of course they do.

From our seats you could feel the anticipation building. Cowboys were taking selfies with their wives and probably tweeting it out, telling everybody they were about to get their faces rocked by Pitbull. 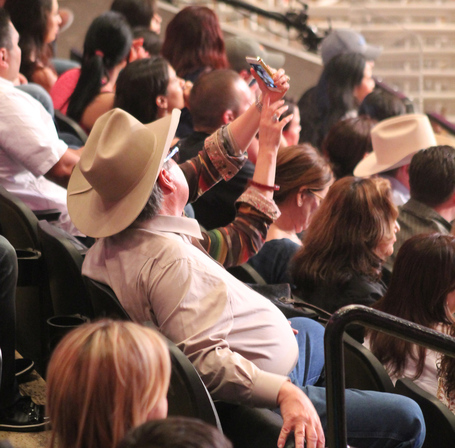 Cowboys lined up at the chutes, ready to get their faces rocked. 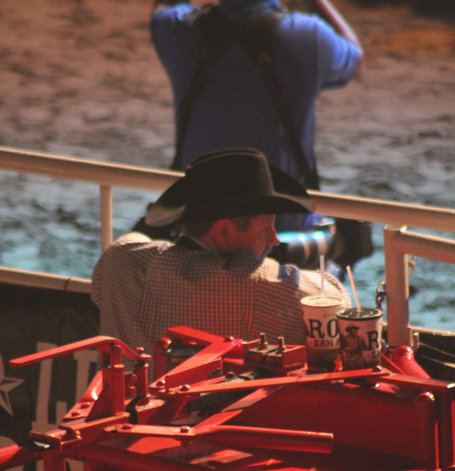 After what seemed like an eternity, the man finally took the stage. And this is by no means meant as disrespect to Jon Bon Jovi, but when you say you've seen a million faces and rocked 'em all, you're completely full of crap.

Pitbull has seen a million faces Jon Bon Jovi, and he rocks them all, every night. Why don't you just shut up, with all due respect. -The world

Pitbull has seen a million faces Jon Bon Jovi, and he rocks them all, every night. Why don't you just shut up.

And this has has nothing to do with the fact that my wife might have a crush on you.

Jon Bon Jovi, Pitbull takes the same lyrics and stories, and makes them into a new song every night of the week. Have you ever done that? I doubt it. Pitbull has made millions singing about the cities he goes to, and gives people advice about just living life, and how we should all get so drunk and live life. What do you sing about Jon Bon Jovi? Steel horses? What an idiot. With all due respect of course.

So there he was, live on stage. So close you could almost touch him. He said "dale" and "San Antonio" at least 250 times and every time it was more special than the last. And when I stood up and screamed at him and he looked me dead in the eye, I know we were both thinking of the final scene from Rocky IV, and how people can change. 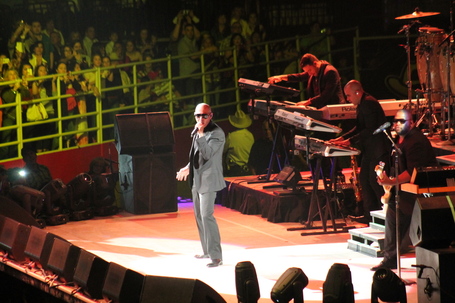 Thank you. I came here tonight... and I didn't know what to expect. I've seen a lot of people hating me... and I didn't know... what to feel about that, so... I guess I didn't like you much either. During this fight concert... I seen a lot of changing: the way yous felt about me... and the way I felt about yous. In here... there were two guys... killing each other. But I guess that's better than 20 million.

I just want to say one thing to my kid... who should be home sleeping. Merry Christmas, kid! I love you!

Did you ever do anything like that Jon Bon Jovi? I doubt it.

Pitbull came to town and no matter where you're from, or what your last name was, he rocked your face off. He made me think of legends like Marty Stuart and Don Williams and Rocky Balboa while he sang the same song over and over.

At work on Thursday morning, P Mo, the Fog and I discussed how our view of the world had changed. Now we're never gonna stop the party. And if we get down, we're gonna get back on top and get drunk. Dale.

Thank you Pitbull. You're the real cowboy. Jon Bon Jovi can suck it.