The Red Raiders were part of their biggest blowout of the year, blowing out the South Carolina State Bulldogs. Everyone had a huge game, including freshman Justin Gray.

This is the first game that I think I've missed in quite a while, due to not being able to find it on my DirecTV, so all of my thoughts are based off of the box score and highlights (by the time I realized that I wasn't going to get the game, it was too late to ask someone to cover my rear). Maybe it was on, but I just didn't see it. The Texas Tech Red Raiders obliterated South Carolina State, 101-39 and it wasn't even close. Ever. And you can probably expect for a similar result against Arkansas-Pine Bluff because they are as terrible as SCS. Yeah, that's absolutely true. 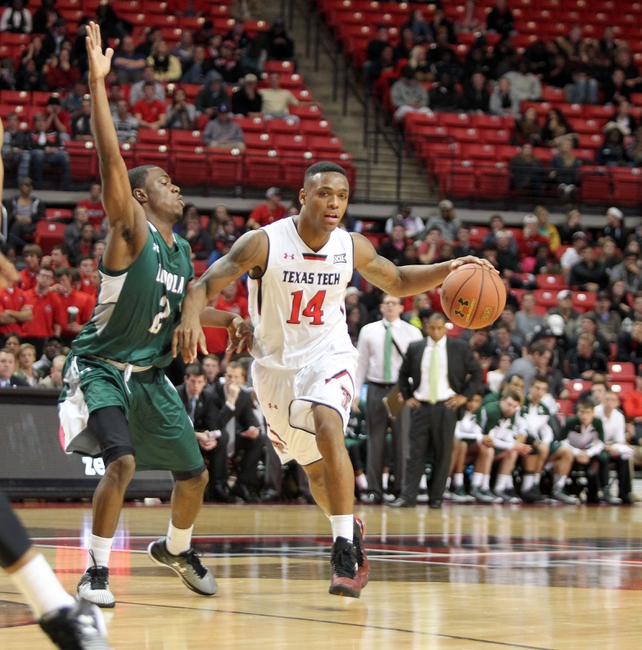 SF Justin Gray: Gray was crazy efficient last night, making 7 of 9 of his shots and 4 of 7 from the free throw line, grabbing 4 rebounds, 3 assists, 1 block and just 1 turnovers while scoring 18 points. Not only that, but Gray only had 1 foul and that's good news because that's what's kept him on the bench at times. Terrific game.

1. 28 to 11. That's the assist to turnover ratio and that's fantastic. I can't recall a ratio that good in quite some time. And the offense was led by Devaugntah Williams, who had 7 assists on the night and no turnovers (as an aside, he had a terrific game as well, including 13 points and 5 steals). And Robert Turner was also good, notching 4 assists and just 1 turnover.

2. Turner Gets Right. To say that Robert Turner has struggled this year would be an understatement, but he was terrific last night, scoring 14 points on 5 of 8 from the floor, including 4 of 5 from the three-point line along with the aforementioned 4 assists and 1 turnover. Texas Tech has to have Turner be better, something more similar to what Turner did last night that what he has done previously. This is the Turner that we need to see, and if we can get a more efficient Turner then that would help tremendously moving into conference play.

3. Going Deep. texas Tech was on fire from deep, making 11 of 22 from the three-point line and if you ever wanted to know what can blow out a team and keep a team that isn't as good, close to a better team or beat a better team. Texas Tech has been hot and cold, mostly relying on the outside shots of Williams and to some extent Toddrick Gotcher. If the rest of the team can contribute just a bit, especially Turner, then the offense becomes significantly more dangerous.

4. 53 to 35. Another double-digit rebounding edge, a night where Texas Tech just dominated the boards, including 9 rebounds from Zach Smith who played just 18 minutes and another excellent game by Isaiah Manderson, who finished with 11 points and 6 rebounds last night. Alex Foster, a guy we haven't mentioned all that much, also finished with 6 rebounds in just 13 minutes. And lots of other guys did their job as well, including Justin Jamison grabbing a handful in what is likely some blow-out time and Clark Lammert. I'm debating as to whether or not Texas Tech is more balanced this year over last year.

5. One More Creampuff. I mentioned above that Texas Tech has one more creampuff on the schedule and then it gets real. Arkansas-Pine Bluff shouldn't be much of a contest, but then Texas Tech will play Loyola (Ill.) in Las Vegas as part of the Continental Tire Las Vegas Classic, which this game and the Ark.-Pine Bluff is also a part of. Loyola (Ill.) is statistically a better team than Texas Tech. And then Texas Tech will face the winner between Boise State and Houston in Vegas. After that, it's home again against North Texas and after that, it is conference time. And if you doubted if this game against SCS, then check this out. The game was over with 17 minutes left in the second half.