Texas Tech gets 18 points from newcomer Devaughntah Williams, including 5 three-pointers, and freshman Norense Odiase has another strong game with 13 points and 7 boards, leading Texas Tech to a win over Missouri State. 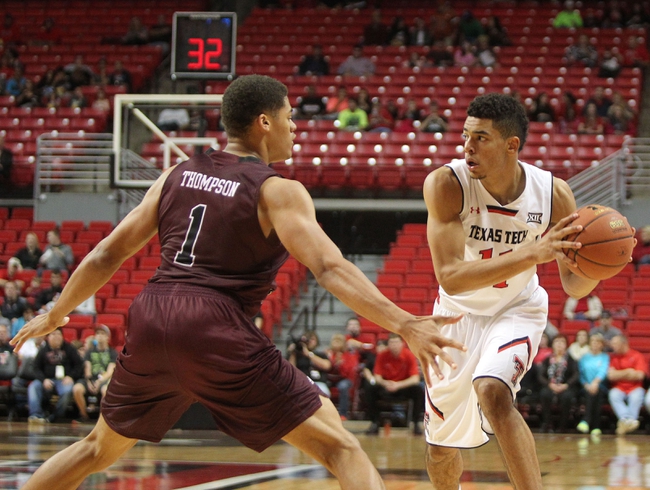 It was the outside shooting of DeVaughntah Williams that sparked Texas Tech in the first half to seemingly match March Marshall shot for shot and the Red Raiders were able to pull past the Missouri State Bears in the second half, 80-69. This was a close game for most of the first half, but Texas Tech continued to do a good job of being patient on offense and pounded the boards en route to a double-digit win. And to clarify, no one is celebrating some huge program changing win, it was a good win against a Missouri State team that has a terrific player in Marcus Marshall and after a first half where Marshall scored 17 points and had 8 shots, Texas Tech limited him to just 3 shots in the second half and Marshall finished with just 22 for the game.

Devaughntah Williams: Williams was on fire in the first half, hitting all 3 three-point shots and making 3 free throws, and had 12 points, while he added just 6 more points, 2 more three-pointers, in the second half, that first half stretch was terrific and he was automatic. Texas Tech has lacked an athletic guy from the outside and if Williams can become that player for Texas Tech, then look out. Williams finished with 18 points to lead the team on 5 of 9 from teh floor, including 5 of 6 from the three-point line and helped open up the inside game.

1. Starters Struggling: Randy Onwuasor was 1 of 5 from the floor and Justin Gray was just 1 of 4 and Robert Tuerner was just 4 of 11 (including just 1 of 5 in the first half) and it's a bit concerning to see those starters struggle so much. Onwuasor is a guy that I'm struggling to figure out why he starts as he has a very limited offensive game and can be prone to make mistakes. He does handle the ball well, or much better than last year, but he still seems to be a bit of a detriment offensively and with Turner struggling to score at times, even short bunnies that are incredibly close to the rim, he's missing. The three guards that started were all 0 for 7 from the three-point line from the game and there's no doubt that the bench saved Texas Tech, but those guys will all need to improve offensively to continue to warrant significant minutes. And with Gray, he's still figuring things out and you can see the athleticism that he brings in short stretches, he just has to work out not fouling and playing only 11 minutes during the game.

2. Odiase Dominate the Paint: Norense Odiase wa dominant in the paint, shooting and making all 4 of his shots and making 5 of 8 from the free throw line, and 7 boards, 2 assists, 3 turnovers and 1 block. Odiase's presence is really terrific and he's patient underneath the basket. Patient to the point where I keep thinking that he's going to have his shot blocked to Post, but Odiase sticks with it and figures out where the crack of daylight is to find an opening and score. I have a feeling that this could be problematic when there are more athletic teams with more athletic frontcourts, but there won't be any players that will be able to move Odiase off the block.

3. Gotcher Makes the Small Plays: I thought that the play of Toddrick Gotcher was really important to the overall flow of the game, as he finished with 7 points, 6 rebounds, 2 assists, just 1 turnover and a steal. Gotcher, along with Onwuasor, played terrific defense on Marshall for the better part of the game, along with Turner too (I think). Gotcher is taking a bit of a backseat to Gray and he's not starting. Long-term this is the right move, but Gotcher doesn't ever show any negativity in not starting and he plays hard each and every minute he's on the court.

4. Dominating the Bench and the Paint: Texas Tech finished with 28 points in the paint, to Missouri State's 10 and a large part of that was the points off the bench, which Texas Tech also won 38 to 22. With Odiase being the only real consistent threat offensively, Turner can be hot and cold, that starts, the bench is very much pulling their weight and then some. This is a much deeper team than I thought at the beginning of the season and having that depth is going to pay dividends in the Big 12. And Texas Tech dominated the boards, as they should have, 40-22 over Missouri State and don't forget about those 5 blocks. Zach Smith is a high riser and he struggled a bit offensively, but he's incredibly solid defensively and he finished with 7 rebounds.

5. Evans' Progression: If given the opportunity to coach this team, I think that I'd be pushing Keenan Evans to be on the fast track to start alongside Turner. Yeah, that means that more than likely you'd have 4 freshmen starting, but if head coach Tubby Smith is looking for a guard that can handle the ball, not turn the ball over and do some things offensively, then I think it's Evans, at least for me. Ideally, I think I'd prefer Williams getting the nod at shooting guard, especially now that he's seemingly found his range and has the ability to stretch the defense quite a bit. But that doesn't seem to be the direction that Smith is going with and I'll be interested if and when he makes a change to those starters, namely Onwuasor.