We're not sure how many thoughts you're supposed to have when your team loses by 55 points, so we've just got one thought.

Share All sharing options for: 1 Thought on Texas Tech 27, TCU 82

1. A 4-Year Old's Birthday Party and Date Night. About a month ago I planned a date night with my wife and my 3-year old niece was having her 4th birthday party that just happened to be at 2:00 pm yesterday.  Both of these things meant that I was going to be away from the game for the most part, which is fine. I'm not a "real" reporter so personal life sometimes gets wrapped up in things. I was able to catch glimpses of the score and the game for about an hour at the party, but once I was on date-night duty, I put my phone down because the whole point of being out with your spouse is to, well, be out with your spouse and not be on your phone. 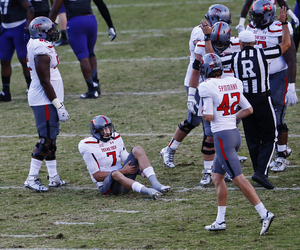 So, I haven't watched the game and I don't know if I am going to watch the game.  In this space, I normally write about 10 things and I do my best not to get too down on the team after a loss and not too happy about things after a win. Well, I'm not sure what to say about losing a game 82-27 that's going to make anything okay or better or whatever.  I'm not really even sure what to say now and I'm not sure that I'll have ten cognizant things to say after I watch the game.

I don't understand how TCU was able to kick two field goals in 0:48 seconds. On some level, that's hilarious and on another level, that's pretty sad.  And yes, I did look to see what happened, a fumble, so there's that.

The only thing that I really think about is that I still believe long-term in head coach Kliff Kingsbury.  Having not had time to read the post-game thread or the game threads just yet, I'm not sure what folks are discussing and I'm sure that there are lots of folks mad at Davis Webb and those sorts of things, but 82 points is a lot and Texas Tech kinda needs to start figuring out those things on the defensive side of the ball.  I'm not sure how or why or what is supposed to happen.  I'm not that smart, but son of a son . . . 82 points.

As you have noted, I have put the game links and quotes and Kingsbury's press conference in this post and all of the normal things that I do, I just don't know how I'm going to watch the game, write about ten things and write a decent post all before 8:00 am, which is my goal on Sunday mornings.  Not only that, but we have a social worker coming to visit this afternoon (no, nothing is wrong) to update our home-study for our second adoption.  I've got to help clean, so I'm trying to figure out how and if I really want to watch a 50 point loss.

As far as being upset and all of that other stuff, I don't even know what to tell you.  I'm a pretty steady human being. I don't get too down (normally) and I don't get too excited.  All I know what to tell you is what I would tell myself, which is to just keep working and it's eventually all going to be okay.  And now that Yahoo! is picking up all of SB Nation's posts, I can't cuss, which usually makes me feel slightly better for some reason.

Before the game, I felt that TCU had some real personnel advantages that Texas Tech isn't equipped to handle.  I mentioned them in this week's The Huddle and that's why I felt like Texas Tech was going to lose pretty big yesterday, or at least by 14 points, but less than 21.  I was really worried about those bigger receivers and the young cornerbacks and from looking at the stats, this appears to have been an issue.  Plus, when you add in that running game for TCU that's been crazy good, the defensive line was going to get exposed, much like they did against Arkansas.  The biggest problem that TCU had against TexasTech was that their offense had been crazy efficient and Texas Tech's offense isn't crazy efficient and I never thought that Texas Tech was going to be able to keep pace.

This appears to have happened, but x 100.

Now, just looking at things now, I don't think that Texas has those same personnel advantages and as down as you are on this game, I don't think the Texas game is going to play out this way at all.  I actually think that the Texas game is going to be a pretty good day for Texas Tech (although I understand that Webb is injured and I won't know what to think about Patrick Mahomes) but the Texas offense isn't efficient really at all and the defense is okay, but not really anywhere close to being something that bothers me.

Maybe the best thing to tell you is to go enjoy the day. If you live in Texas, the weather is great today, unseasonably warm, but still a great day.  Yeah, I'm talking about the weather to end this post.