We're taking a look at the first touchdown of the game against Oklahoma State last Thursday night, an old Run and Shoot concept, how and why it worked.

You guys are familiar with June Jones. He was one of the last coaches still exclusively running an offensive system known as the Run and Shoot. You can read all about this fascinating system here.

The Run and Shoot Offense was designed by a high school coached named Glenn "Tiger" Ellison. It was modified and popularized by Mouse Davis with Portland State and in the USFL with the Houston Gamblers. The Run and Shoot offense is run out of spread formations and it relies on receivers adjusting their routes based on coverage and movement of the defense. The offense reached its apex in the late 1980′s and early 1990′s when it was run by the Houston Oilers with Warren Moon, the Detroit Lions with Barry Sanders, the Indianapolis Colts and Atlanta Falcons. It also helped the University of Houston and Andre Ware post huge passing numbers and win the Heisman Trophy in 1989.

The Run and Shoot Offense is no longer widely used in college or pro football and by 2011, only two Division 1 teams ran the Run and Shoot, Hawaii and SMU.

The Air Raid playbook grew out of this system, essentially, but there are some very visible influences on the Air Raid offense (at least Leach's system) from the Run and shoot, namely the ability of the receivers to adjust their routes based on the coverage.

And since you know all about the Run and Shoot offense, the play we're going to look at is the "Switch" concept, or the Corner Post route combo. 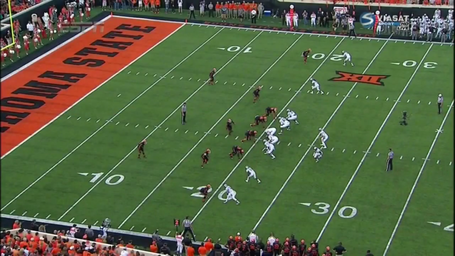 The offense is in a 2x2 formation with a RB alongside Webb. Just before the snap, DeAnrdre Washington goes in motion. This is more to tell Webb what kind of defense he's facing on this down. You've got two high safeties and the corners are pressed up on the receivers, with defenders man aligned over the slot guys. He's looking at what is probably Cover 2, he just doesn't know if the underneath defenders are in man or zone, thus the motion. Middle linebacker flares out with the running back, showing a man look.

Now, this "Switch" concept is kind of like a rub like how we discussed last week. You've got receivers that are crossing paths and the read from the QB on where the ball goes is based on where the defenders go, which receiver they pick up when they cross. 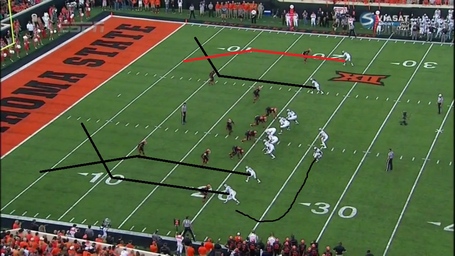 From left to right, you've got Devin Lauderdale at X, Jakeem Grant at H, DeAndre Washington at F, Bradley Marquez at Y and Reginald Davis at Z. Like last week, I've highlighted the route where the throw is eventually going.

Now, in case you couldn't tell, I don't know the names of the plays (or at least what the team calls them), I mainly just assign them a name based on formation and/or route concept/combo. I dubbed this play Double Corner Post because the route concept is repeated on each side of the field, and is a combination of "corner" and "post" routes. Those routes are named for the destination of the receiver. The corner route is running towards, you guessed it, a corner of the endzone. The post route is running towards the...? Goal post! And the "switch" concept is named for the receivers switching defenders or places down the field. We're oh so smart now. 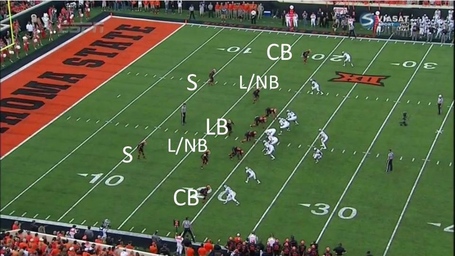 Here I just labeled where everyone is pre-snap. We're going to track them through a couple of other screen shots to show how the play develops. 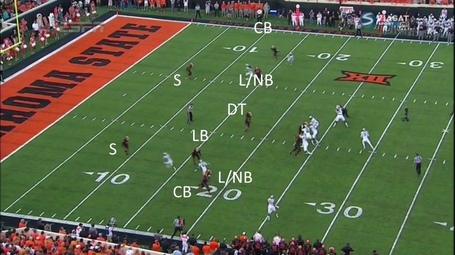 From this first screen shot, you can see the middle linebacker (labeled "LB") is out covering the Lauderdale who has already made his cut in his post pattern. The outside backer/nickel and corner backs kind of collide, which is something you would want running this play, but you can see that Lauderdale stumbled a bit too because of it. I know it's a little hard to see, but both of those defenders are standing on the 2 in the 20 painted on the field. 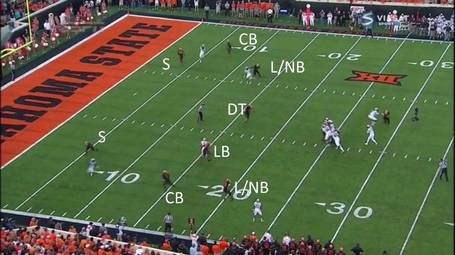 In this instance, the outside defenders switch off the responsibilities, showing the defense was in zone, rather than man. You can clearly see the bracketing by the CBs and S of the corner routes, and with the safeties going out to cover the middle opens. The defender on Davis had his hips turned and Davis was able to get past him with ease, and this is when the ball is thrown. 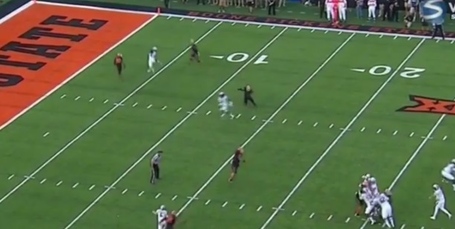 The DT has no shot at making any kind of play. He's standing basically directly in front of Webb, leaving a huge window to throw to the DT's left. You can also see the defender covering Davis has fallen behind and Webb hits Davis in stride for the easy TD. If the safeties would have stayed in the middle and taken away the post routes, the corner routes may have been open, allowing Webb to throw over the CB and lead the corner route receivers deeper into the endzone. Again, you're trying to force the defense to make a decision and then make them pay for making the wrong choice. I think about the only way the defense would have had a chance here is if there was a linebacker in the middle (done by a substitution pre-snap) and having him play his zone defense 5 yards deeper. But the defense would have had to have had another coverage defender on the field and given more of a 3 down lineman, 2 linebacker and 6 defensive back look. I would make a counter point that if the defense had shown that look with this down and distance (2nd and 8), Webb and Kingsbury may have checked into a run.