The phrase has become a cult phenomenon. There's a questionable play call so something bad happens a few plays later to even things in the cosmos, and a nation cries in unison "Ball don't lie." We caught up with Ball for his thoughts on the matter.

The most recent example of his honesty came during the Seahawks/49ers Championship game on Sunday. The 49ers appeared to have recovered a fumble on the goal line, but the referees didn't overturn the call on the field and Seattle maintained possession. On the next play Marshawn Lynch fumbled the handoff and the 49ers took over.

And the nation rejoiced. 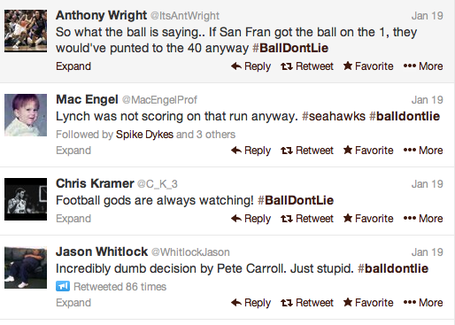 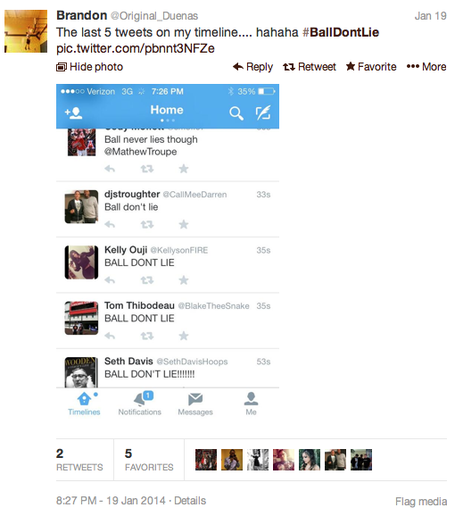 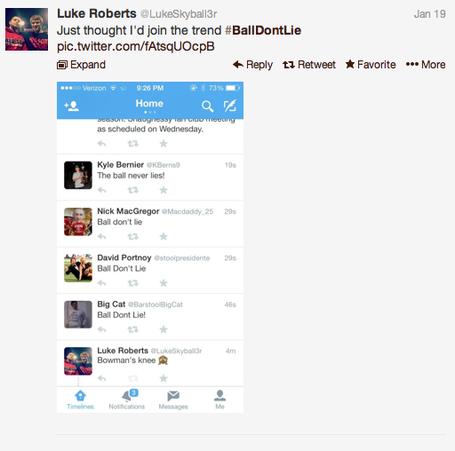 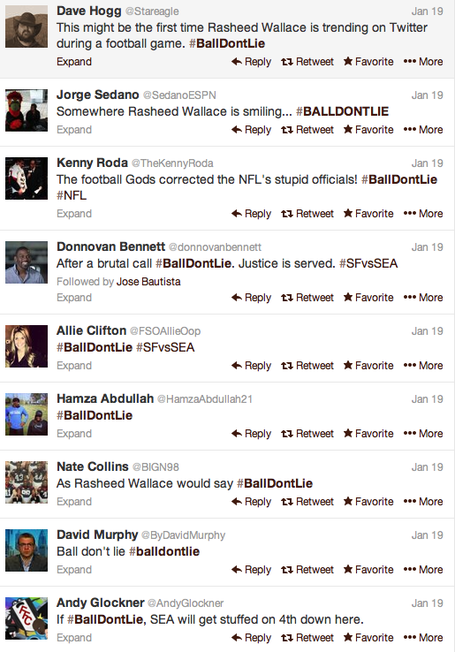 So I thought it would be interesting to take a deeper look at how this process works. How would I do that you ask? Well, I had a few beers and talked to some balls in my garage.

Travis: Most people credit your honesty to Rasheed Wallace. Would you care to elaborate on that?

All I know is I don't get a dime for any of the T-shirt sales. It really pisses me off. -Ball on Rasheed Wallace cashing in on his honesty

Ball: Yeah, Rasheed's a media grabbing little bitch. I told him I'd make up that call for him but then he ran with it and told the media all about it. There's been a Gentlemen's/Ball agreement on this for decades but Rasheed wanted to cash in and make a few bucks. Bully for him. All I know is I don't get a dime for any of the T-shirt sales. It really pisses me off.

Travis: Man, I'm really sorry to hear that. But since it's out there now, let's backtrack a bit and talk about the origins of your honesty. How did you get to be the ball you are today?

Ball: You know it was a real struggle.  Back in the 1800's I'd find myself in a quandary when those kids in their knickers were rolling the wheels down the street and knocking the crap outta me with a stick. There were several times the local butcher would come out and yell at the wrong kid for using me to break the windows in his shop, but I always kept my mouth shut and I always regretted it.

Then in the 1950's I got sorta tangled up with some bad folks in Cuba and I think that's where things started to go downhill. Heroin wasn't widely known at that time but I'm ashamed to admit I stuck many a needle in my air hole to drown out the pain.

It was in the 70's where I really hit bottom. I still had my day job but I got way too caught up in the disco scene and basically sold my soul to stay in the good graces of people I shouldn't have even cared about. It was partly because I needed the money to support an ever expanding drug habit but there was also the thrill of it all, wearing those sequins and spinning around night after night after night.

I can't tell you how many times I'd be up there high above the dance floor, spinning away as "It's Raining Men" blared from the speakers and I'd look down at all those lost souls and feel a little sad. -Ball on his time as a Disco Ball

I can't tell you how many times I'd be up there high above the dance floor, spinning away as "It's Raining Men" blared from the speakers and I'd look down at all those lost souls and feel a little sad.

But of course that didn't stop me from snorting lines of coke from the bar tops with the waitresses and midgets when the club closed down every night.

Travis: So when did you decide to make a change and turn your life around?

It must've been about 19 G's before I hit the pole and that was it. I just blacked out. -Ball

Ball: I think it must've been late 1981 or early 1982. I remember it was really cold out and I was tied to a tether ball pole and these kids just kept whacking me and whacking me and I was spinning and spinning. And you know in tether ball the closer you get to the pole the faster you spin and this one kid must've (caught) me just right, but anyway I don't remember ever spinning that fast before. It must've been about 19 G's before I hit the pole and that was it. I just blacked out.

So it was a few years later in the 1986 World Cup when I made my biggest mistake on the world's biggest stage. Now I was a big Maradona fan. He always treated (me) well. But when I let him get away with that hand ball to score a goal against England, it's just made me sick. To this day it makes me nauseous.

That's when I decided to make some changes. I'd really slowed down my drug activity after the tether ball incident. (I) Rarely snorted any coke and only occasionally did heroin. I was really into whiskey and meth, but I decided to drop it all cold turkey after that play. Except for the occasional whiskey bender, I've done pretty well.

I also made the fateful decision to stop lying, forever.

Travis: Wow, that's incredibly powerful stuff. Have you spoken with Maradona since the incident?

Ball: No, he won't have anything to do with me. He was once a hero of mine but now he's on my bitch list too.

Ball: Big. You got any smokes?

Travis: No, sorry. So let's lighten it up a bit. Of all the sports equipment out there, who do you like least?

Travis: Are you ok? You don't look like you feel very good.  Why are you shaking?

Travis: Ok, just let me know if you need a break. So what are some of your favorite moments since you made the decision 28 years ago to stop lying?

Ball: I said I'm fine so stop acting like my mom ok.

As to your question, I mean, that's like asking which one of your kids (is) your favorite. Jose Canseco comes to mind I guess. It was literally hours prior to a game that I saw him injecting steroids in his butt so I did this.

Then this kid sent a mean text to his mom just before the game started so guess what bro?

And I can never resist messing with the Lions. I don't know why, it's just fun to me.

Travis: I'm beginning to sense an alarming amount of hubris as if you feel li

Ball: (interrupts) What the hell are you talking about? I told you I've been clean for years and I haven't smoked hubris since Mard

Travis: (interrupts) No, hubris is when your ego clouds your judgement and you might feel like you're bigger than the game. Do you feel that way?

Also, next time you play golf watch out for that tree because I'm ricocheting off it and gonna hit you square in the nuts. -Ball getting angry

Ball: All I know is try playing the game without me and see how much fun that is. Also, next time you play golf watch out for that tree because I'm ricocheting off it and gonna hit you square in the nuts. Can I have a drink of that beer?

Travis: That's probably not a good idea. So let's wrap this up with one last question. Do you have any messages or words of encouragement for the children of the world that are just now beginning to realize the thrill of sport?

Ball: Yeah, forget about Santa Claus. I'm the one who's watching you and you better do right. I didn't give up all the partying and strippers to watch you little punks ruin society. Get your heads right or I'm gonna embarrass you real good.

Ball: Piss off. I'm outta here. Thanks mom. You're so going on the bitch list.