Wreckem619's Adventures at the Holiday Bowl

VTM reader and member was at the Holiday Bowl as well as a few events leading up to the bowl game. Come check out his adventures in hanging out with the Texas Tech Red Raider football team.

Share All sharing options for: Wreckem619's Adventures at the Holiday Bowl

This is a guest-post from VTM member, Wreckem619, who lives in San Diego and attended the Holiday Bowl, as well as some of the events leading up to the Holiday Bowl. Much thanks to Wreckem619 for taking the time to do this write-up. This is just an awesome example of the power of Viva The Matadors. Wreck 'Em!

After the announcement of Texas Tech playing Arizona State in the Holiday Bowl I took to Facebook to create an event for our tailgate party. My wife and I would be having people traveling from Ft Worth, New Mexico and Paris (not Texas) France as well as family from right here in San Diego tailgate and attend the game with us. I also posted about the tailgate on the Texas Tech Alumni San Diego Chapters Facebook page as well as my brother added it to the comments of the San Diego Hotspots. I was expecting about 30 people for the tailgate but we will get into that later.

I wasn’t able to attend the day at Sea World but was wearing Tech gear when the team went to the San Diego Zoo. I arrived alone but within minutes ran into the head of the San Diego Alumni Chapter who also happens to be in Public Relations and the San Diego Zoo. You can see her chatting it up with some coaches in the official recap of the teams visit to the zoo. There were only a few fans and the Holiday Bowl Committee greeting the team. This is where I falsely identified Michael Brewer as the starter as he was first off the bus with a huge smile and gave me thumbs up. Maybe he was just ready to see the Panda. As the players filed through I would yell out some names of players I recognized and words of encouragements along with snapping some photos. When Eric Ward walked by he stopped and told me to tweet some of those pictures at him, then he posed for one. I congratulated him on a great career and he turned around and talked to me for a few minutes. He seemed to be enjoying himself and he told me he is just trying to take this one last trip as a Red Raider in. 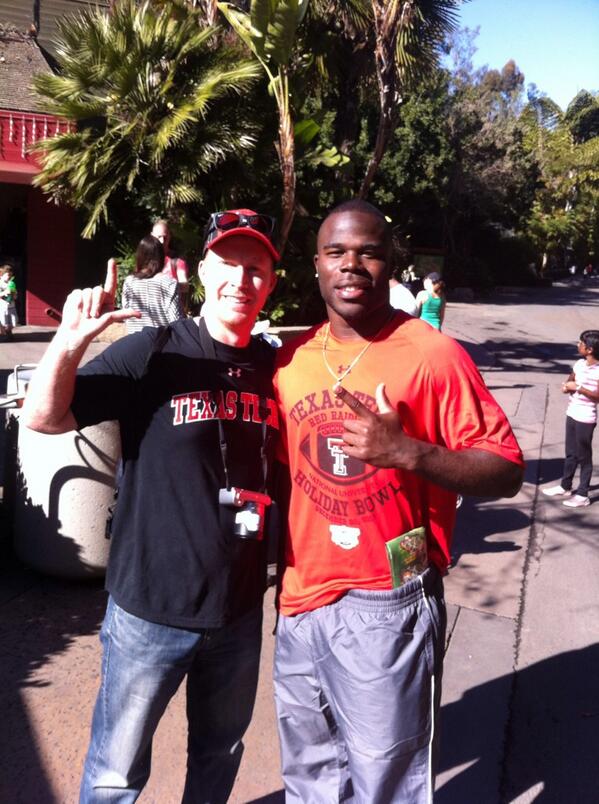 @E_Ward18 thanks for taking the time to chat at the zoo. Your an ever better person than player #wreckem pic.twitter.com/b6L5CL46Qg

At this point I noticed Coach Kingsbury was being interviewed so I slowly made my way over and took a picture or twenty of him. After the interview was over he was talking to a few people and he had what looked like might be a grad assistant standing next to him. I asked the grad assistant if I could get a picture with Kliff but before he had the chance to answer Kliff told me to come on over. I was a little shocked how approachable he was with everything else going on. We chatted for the 30 or so seconds it took them to take our picture and I wished him good luck. I then quickly text that picture to my wife and I’m sure she was shaking her head thinking I was even crazy for going and crazier for getting a picture with him. 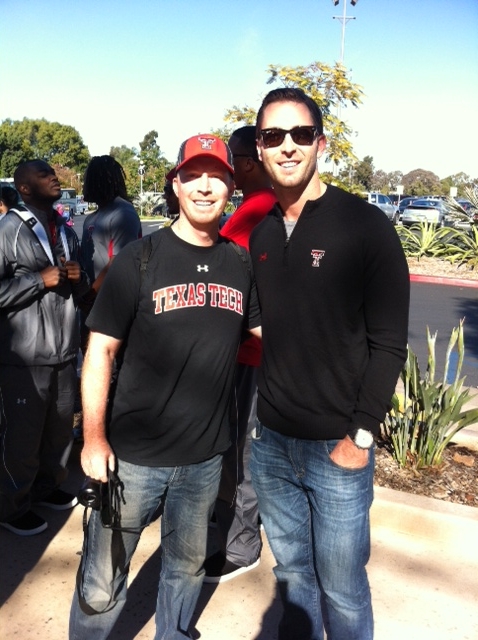 I proceeded to walk around the zoo a little and take in some sights. I then saw two players being interviewed and a third standing off to his side waiting for his friends to finish up so they can go on with their day. I quickly found out this was Bruce Jones as he mentioned he was from Riverside. He was excited to play in his home state and in front of friends and family.

After watching some Brown Bears wrestle for a few minutes I thought I should wrap up my day and head out. One thing I really took from this experience that I sometimes forget is these guys are still just kids. We see them on the field on Saturdays and read updates and articles on them and I think that we sometimes forget how young they are. At one point I overheard a group of them saying how they wanted to see the monkeys and they took off running in that direction. This is something I will try and think about next time I am frustrated with the way a game is going.

Saturday my parents and brothers arrived and after dinner we decided we would check out the radio show at the Hilton Bay Front with Chris Level. Some members of the Goin Band, the cheerleaders and Raider Red were all hanging around. I got my son to take a picture with Raider Red but he is three and a little afraid of things dressed up like that. My wife took a picture of me and my younger brother with some of the cheerleaders then we set down for the radio show which was being broadcasted live from the bar area. We had the opportunity to listen to Coach Wallerstedt, Coach Kingsburry as well as Chancellor Kent Hance and President Duane Nellis. It was a neat experience to hear all of them talk in person and see a live radio show. As I was coming back from the restroom I ran into Coach Wallerstedt and shook his hand, he’s got a firm hand shake. In the 30 seconds of talking to him I was ready to hit the field. No wonder the D came out like they did. 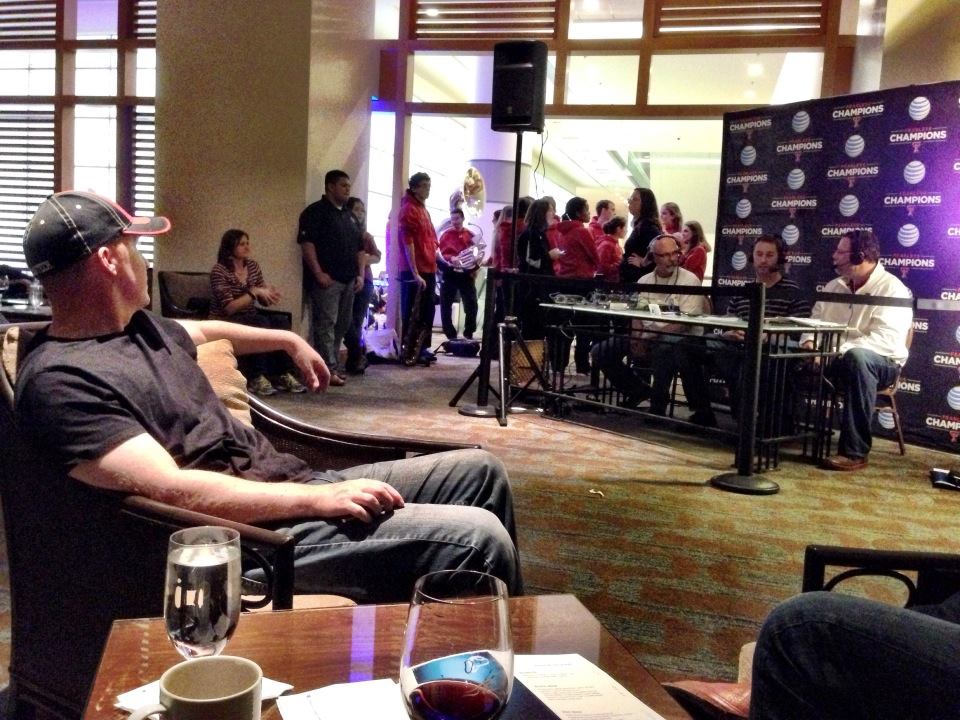 On Sunday the rest of my out of town family had arrived and we met up and did our own thing for the day. We saw several people with Tech gear walking around as we hit up a couple of the Hotspots(link to hotspots) that I mentioned. As my wife son and I were heading back to our car we happened to come across the Arizona State Alumni Happy hour. I must have had some mischievous look on my face because my wife quickly says don’t do it. I quickly blocked that out and picked up my son and said "Guns up Nolan!" We walked through the middle of their happy hour saying "guns up" and "wreckem Tech" as the entire bar booed us. When we finally made it to the other side we were all laughing. The rest of the night Nolan would tell everyone he says that we said "Guns up" and they booed us.

Suns up guns up its game day. Made final preparations for the tailgate and headed off in the RV to The Q and arrived in the parking lot at 1pm. Within 15 minutes we had about 20 people at our tailgate and kickoff was still six hours away. Parked about 30 yards away was Will Smiths family including his younger brother. I talked to him for a few minutes let him know I looked forward to seeing him in Red Raider gear in a few years.

We had four Tech flags flying from the RV, red and black balloons, banners, and plenty of other Red Raider gear floating around. Throughout the afternoon we had somewhere around 100 people show up not including the 50 or so Marines that kept stopping by for a free beer. 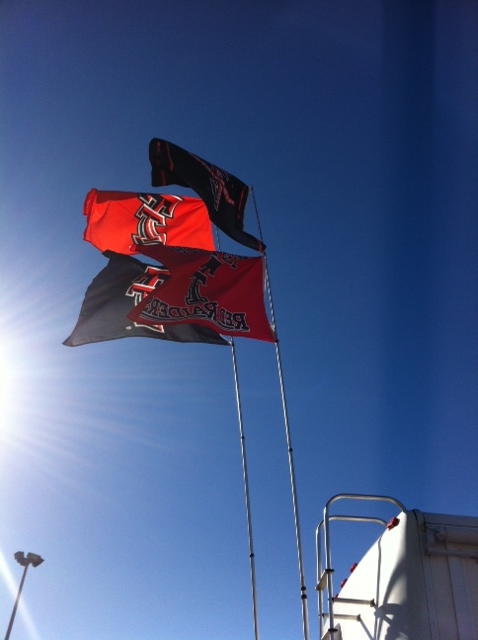 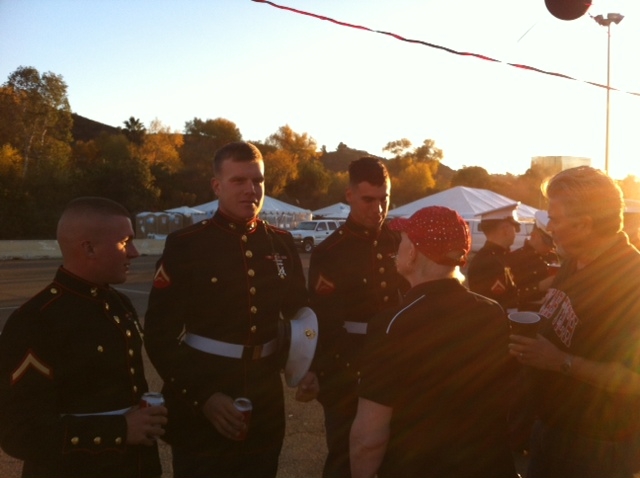 SocCalRedRaider got in touch with my brother (wreckem84) and he brought his family to join us. This was my first experience meeting another VTM’er and it exceeded my expectation. He is a big Red Raider supporter as well as someone I can watch and talk soccer with. Found out he lives within 20 minutes of me. We are already talking about watching a game or two next season and maybe some World Cup this summer. 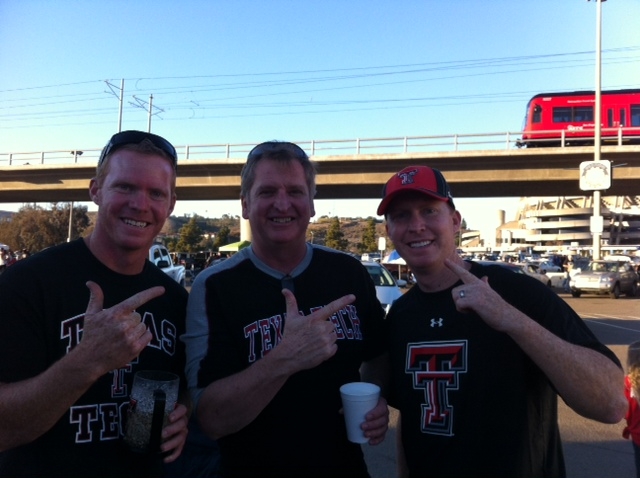 Jackson Richards parents join us and I talked to his father about Jacksons options to open up his recruitment after Leach was fired but he wanted to be at Tech. Members of the San Diego Alumni chapter stopped by, some I’ve known for years and some are now new friends. Fox 5 San Diego stopped by and interviewed myself, my younger brother as well as my aunt. 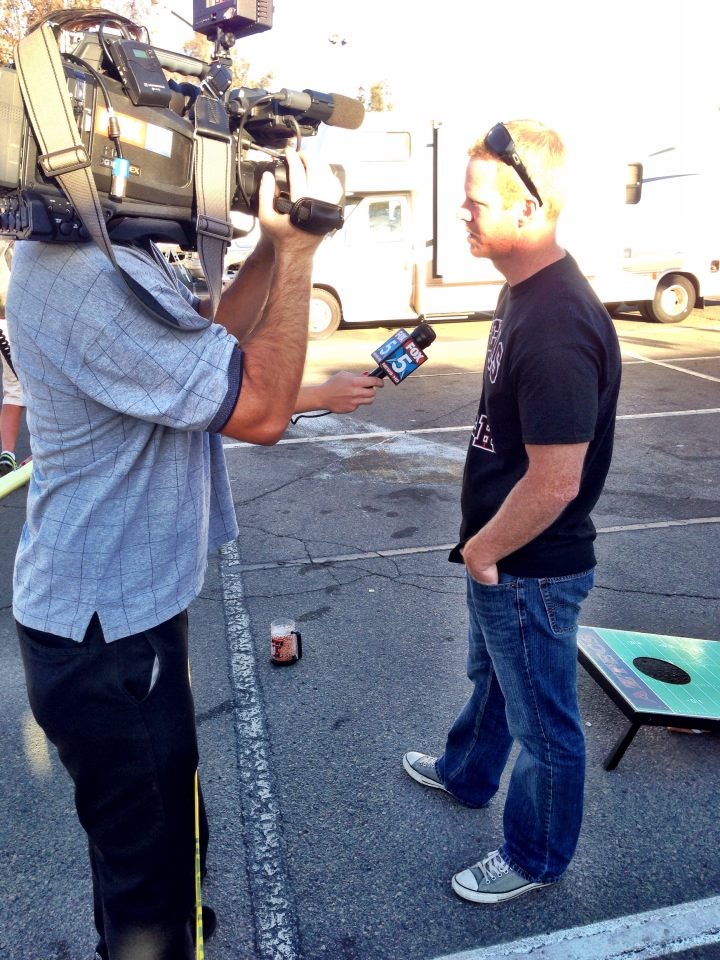 Chancellor Kent Hance and President Duane Nellis also stopped by the tailgate for about 20 minutes and talked to several of us. At the time they stopped by we somehow had around 80 people hanging around and they were amazed at the turnout we had.

Game time has finally arrived and we took our seats right behind the east end zone goalpost. We had about 20 of us in our group and we met a nice family from Odessa that sat in front of us. We were sitting behind the east end zone goal post and you might of saw us a time or two waving our Tech flags or tossing tortillas as time expired. I wont go into the game details as we have plenty of more qualified reporters covering this but I will say Grant looked even fast in person than watching on TV. 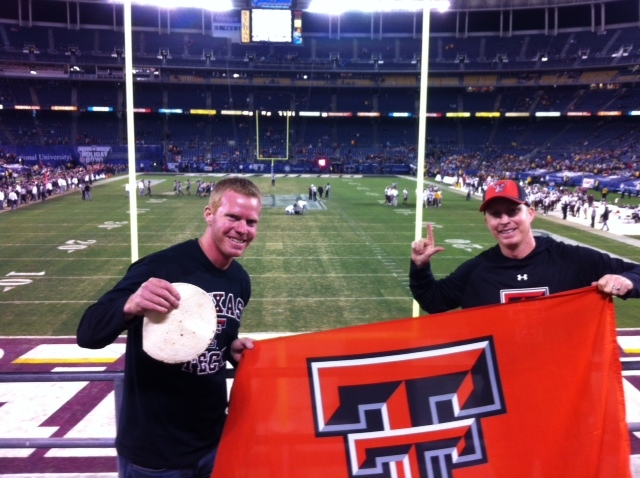 Overall this was an amazing week and I don’t think I could of asked for a better experience. Sadly the Big 12 is ending its ties with the Holiday Bowl therefore Tech wont be coming back to San Diego. Just like Eric Ward told me he was doing at the zoo, I was trying to and I did take in as much as I could this week.

Here are some other pictures you can use, I might need to get one with my wife in there or she might kill me. :) 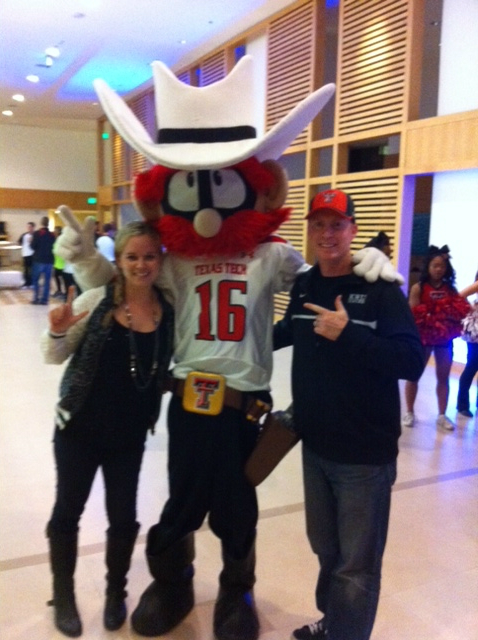 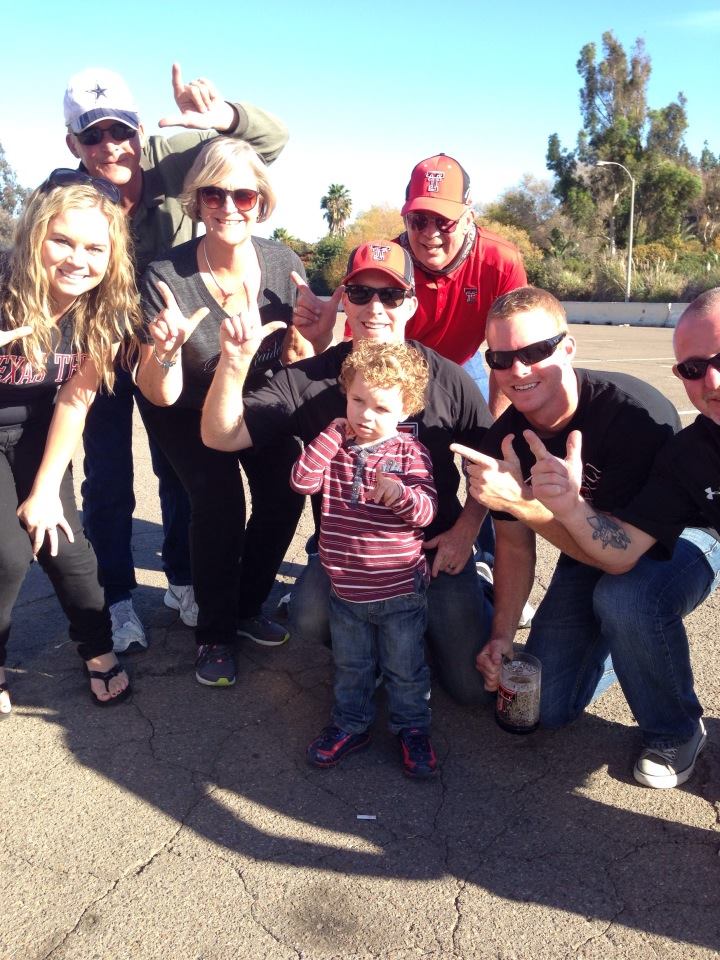 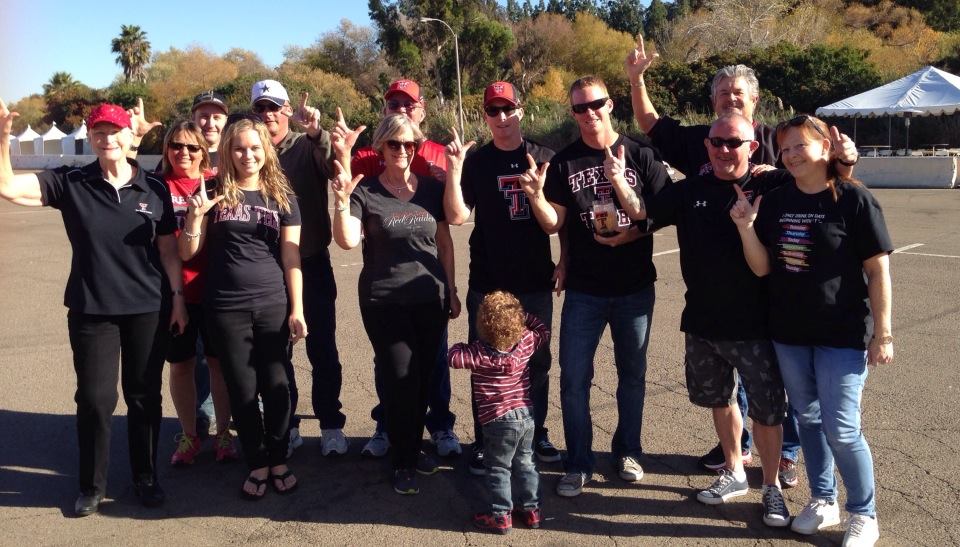