Beau Carpenter has a mullet! The official site previews the running back position. The offensive line is young but progressing. Joel Filani is a graduate assistant at Boise St.

1. Why Aren't We Talking More About Beau Carpenter's Mullet? 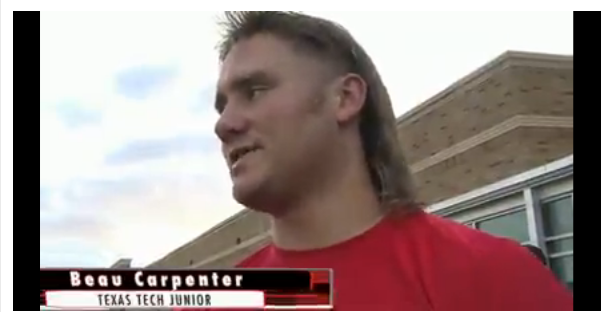 2. Running Back Preview | The official site is making life easy on me as they are previewing all of the positions and up first is the running back position group, a photo gallery and the video below:

3. Practice Roundup | Some of the videos earlier in the week that could not be embeded, but they are now, so that's good. The LAJ notebook has a handful of items, including the idea that LB Will Smith is trying to be a leader:

"I talk with all the linebackers and try to help them out," Smith said. "I’m a senior now, so it’s just different. I’ve just got to be that leader and help anybody out if they have questions and try to be a good example out here every day at practice."

Co-OC/WR Coach Sonny Cumbie said that WR Bradley Marquez is looking better than ever, but I thought this was a good bit of information, which is that D.J. Polite-Bray and DeAndre Washington were early camp standouts:

Cumbie said freshman wide receiver D.J. Polite-Bray and running back DeAndre Washington also have been early camp standouts. Tech practices are closed, but Cumbie said Polite-Bray has "made some big plays" and Washington continues to look good in his comeback from 2011 knee surgery and a redshirt year.

This video is from yesterday, which is practice #5:

And this video is from practice #4, which was Tuesday with LB Micah Awe and head coach Kliff Kingsbury:

4. Offensive Line Progressing | The LAJ has a bit on the offensive line and that they are young, but OL Coach Lee Hays knows that they have work to do:

"They know we’re the weak spot right now," Hays said recently, "and we’ve got to make sure we do our part as an offensive line. I think we’re as good as anybody in the country skillwise. We’ve got to handle that part of the offense up front. The only way we’re going to get there is hard work."

And Hays says that the positions are open (maybe except for Le'Raven Clark):

"I’m blessed," he said, "because coach Kingsbury’s not going to give anybody anything as far as a job. They’re all going to have to earn it. I love that as an offensive line coach. He’s not saying, ‘This guy’s starting. This guy’s not.’ They have to come out here and grind and work hard."

5. More On Kingsbury Playing Without Thinking | Yesterday was waking up and thinking it was Christmas, but not even realizing it until I stumbled on the Grantland documentary on head coach Kliff Kingsbury. It was great and there was a companion article that went along with it that director Jonathan Hock commented on what he saw:

You can hear it in the phrases he chooses to use when discussing his coaching style: "we allow," "we want." According to Hock, this isn't an accident. "Those phrases are so gentle, in terms of football," Hock said. "You don't hear those things around a football team. He's instilling confidence, not tethering them to his voice. You don't want them thinking of your voice when they're being chased by a 270-pound linebacker."

6. Johnson at Southern Miss | Via the Hattiesburg American, I guess I forgot, but I'm glad that former Red Raider defensive back Urell Johnson has found a home at Southern Miss.

7. Filani at Boise St. | Via the LAJ, also glad that former Red Raider Joel Filani is getting into the coaching game at Boise St. as a graduate assistant:

"I knew I wanted to get into mentoring or influencing," Filani said. "I thought maybe some kind of counseling. Obviously, I enjoy football. You get to enjoy so many great things with it, and get the chance to be around the kids and mold them and see kids grow over four or five years. I enjoy the grind and I enjoy the time you put into it, the camaraderie. I could see myself doing this for a living."

More from Viva The Matadors: