A look at the defensive line and technique for the Texas Tech defense.

Defense is the weakest part of my game. I have no problem admitting that. In all seriousness, it is true and so I'm throwing this discussion regarding defensive alignment out there for clarification or correction by you all. Think hivemind. Help all of us by correcting anything that I've written.

I also picked this play because it was clear where the players were lined up and we actually got a look from the perspective behind the quarterback. I thought that if I could try to point out what I know, that it would make it easier for me to discuss. 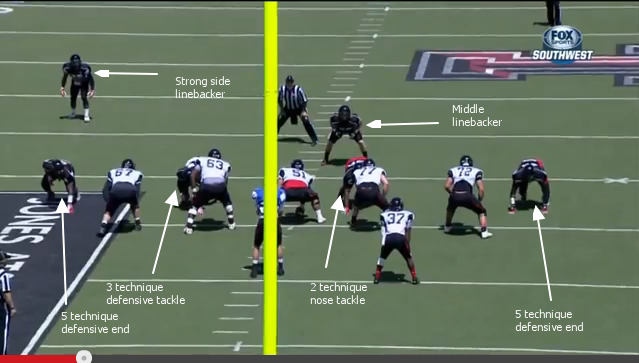 The interesting thing here is that in a true 4-3 under front, the defensive ends will line up at the 5 technique, which is what Texas Tech has done here, but the distinction is that the nose tackle is supposed to line up at a 1 technique, not at a inside 2 technique.

I'm thinking that the purpose is the same as the 4-3 under in that they want to essentially get the 3 technique defensive tackle one-on-one, which is normally Kerry Hyder and intended to make sure that he's able to do some damage.

The weakside linebacker is not in the picture, but I'd imagine that this is some sort of safety or linebacker that is lined up over a slot receiver.