How I Write VTM | Seth C

Writing for VTM is fun and these things help make it easier.

Share All sharing options for: How I Write VTM | Seth C

This post is to explain how I work and how I am able to get things done, remember links and let you know that this is not magic, but a series of things and sites that help me remember to do things.

As far as hardware, I have a Dell that is about five or six years old. It is becoming very slow and I will eventually need to replace it, sooner rather than later, but I want to wait until after the Haswell chip is released. This Haswell chip is supposed to give a significant boost for battery life and since I'll be losing my office with the arrival of our second adopted child, I need something that I can use in the office.

I also have a netbook that has the Zorin operating system. It is helpful right now because I can write while my wife watches What Would Ryan Lochte Do. For those of you who don't remember, the netbook was between a laptop and a tablet, but then they started making laptops even smaller so the netbook became quickly obsolete. I put Linux on it because the Windows system on it was really slow. It is small enough to fit in my lap and not be too heavy, but would imagine that I will ditch the netbook when I get a new laptop.

I do get up at 4:00 am and start working, with a post usually done by 5:30 or so. It takes a bit of time to let out the dogs, make some coffee, and sit down and read what I think I need to write about. I don't watch TV unless it is sports or news, and generally speaking, I consume most of my news by reading it, not by watching it. 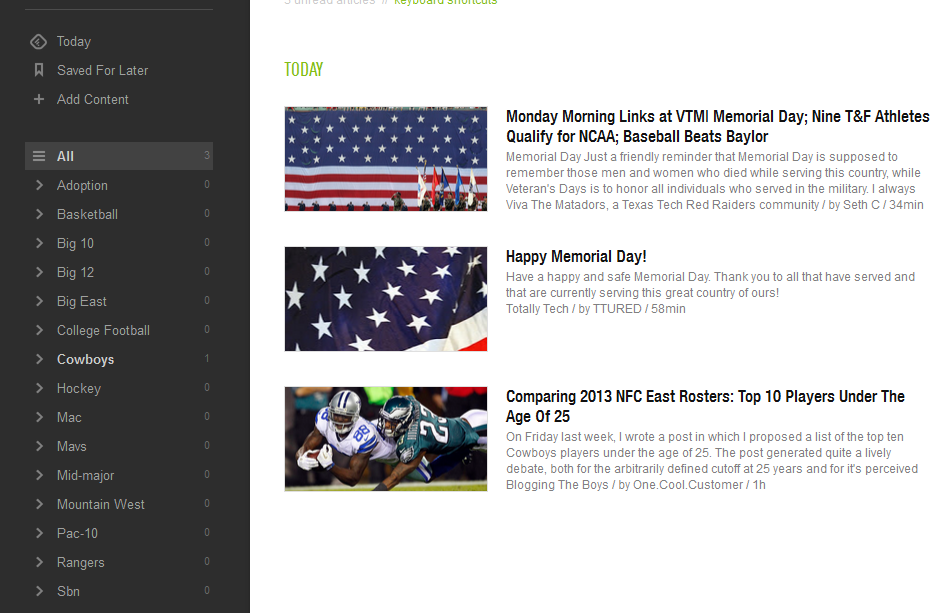 RSS is always a thing that is tough to explain, but I always say that RSS is where the internet comes to you. I don't have time to go to a handful of websites and find out what they are saying, however, what I do have time to do is to use a service where you subscribe to these sites using the RSS icon and then the websites show up in your RSS reader. Up until recently I used Google Reader, but Google decided that they were going to scrap Google Reader, so I had to find an alternative.

I really can't work efficiently without having some service that brings the internet to me so that I can link to them in the morning. Feedly is the best alternative to Google Reader, I think, as it carries over a lot of the same things that Reader did, it just looks different. As you can see, I have different folders of things and sites that I read. Everything from adoption, to the Rangers, to the Big 12, etc. So if I want to see what is being written about Big 12, then I'll go to that folder. 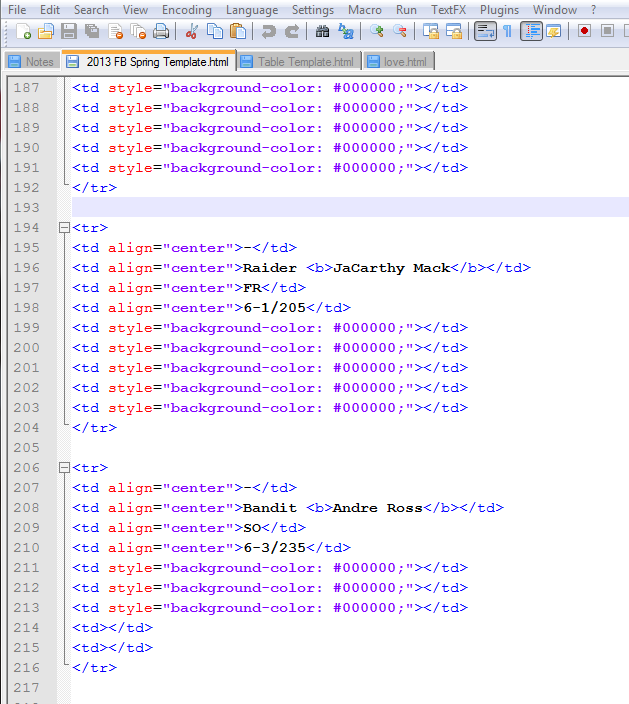 So I write pretty much everything in HTML. I really don't know a lot about HTML, I know just enough about how to figure it out and make things work and eventually I figure out how to make things look okay. It is more time consuming to write in HTML, but the reason I do it is because sometimes some programs and websites, like Microsoft Word and Google Docs, brings with it some formatting and can make posts look bad. So I use HTML.

In some way, it's been good because it has forced me to learn about something that I would normally not learn about and it makes me problem-solve, i.e. I know what I want it to look like and I have to figure out how to make it look like that. It keeps me sharp in my old age.

So I use Notepad++ as my HTML editor and general text editor. The neat thing about this is that you can see how it has different things in different colors and that helps me look at things and figure out where I'm at in terms of making sure I have the right stuff there to make things look good. This was a highly technical sentence. When I am writing on my netbook with Linux, I use Geany, which is similar to Notepadd++, but Linux based.

I do not use Microsoft Word. For whatever reason, Word brings with it the formatting that is inside the document, so when you copy and paste something from Word and into the text editor then it can break SB Nation or make things look horrible.

At one time it used to take me a long time to type the HTML, but now, it's like second nature.

SB Nation has this "clipper" tool and essentially it lets me clip something during the day and save it for later. Then, when I do the morning links post, there is a place where we can easily insert those links into a link post. This is why it is relatively easy for me to post things from the prior day. Normally, I can't remember the day before, but by using this tool, it appears that I have this terrific memory to remember every link to be linked. That's not true at all. I don't remember what I did when we didn't have this tool as it is relatively new. I think I just remembered things. The Clipper only saves articles for seven days, so after that, they just disappear, so if I don't get to them fairly quickly, then I won't remember that I even clipped the link. 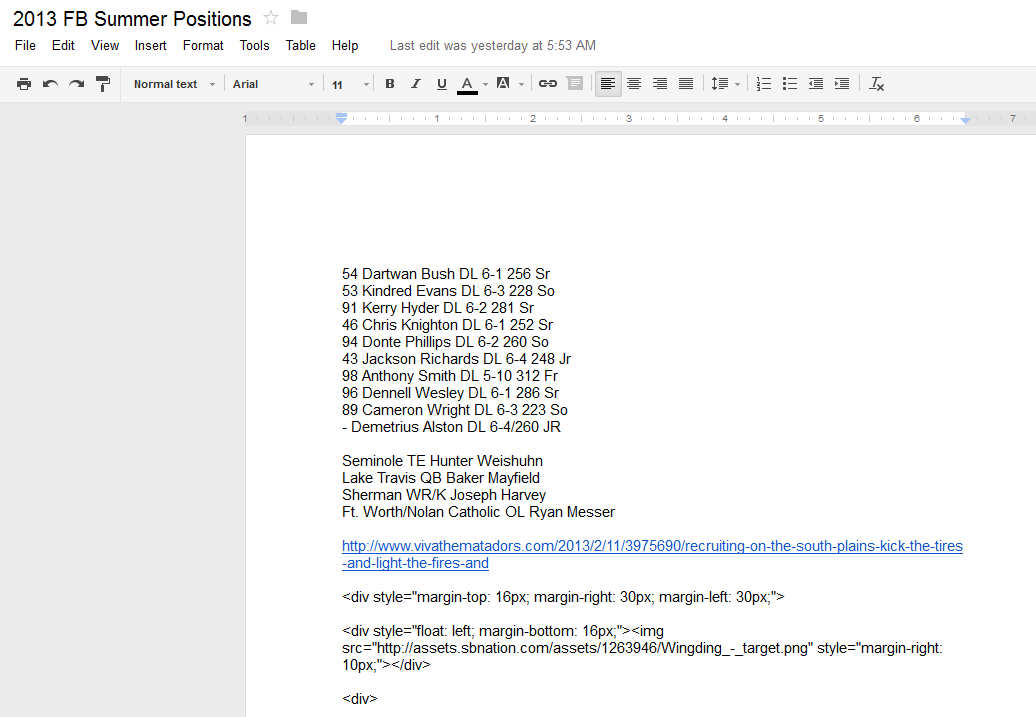 When I want to write and I'm not at home at my desk, I just pull up a Google Document and start writing. If I want to remember a link or something else, I'll stick it here so that I can have it across whatever computer it is that I'm using. I might have an extra thirty minutes during my lunch hour and I want to research who the preferred walk-ons are going to be for this team and so I make a list. Or if I have an extra few minutes to work on a post, I have saved some HTML that I can plug into a post. 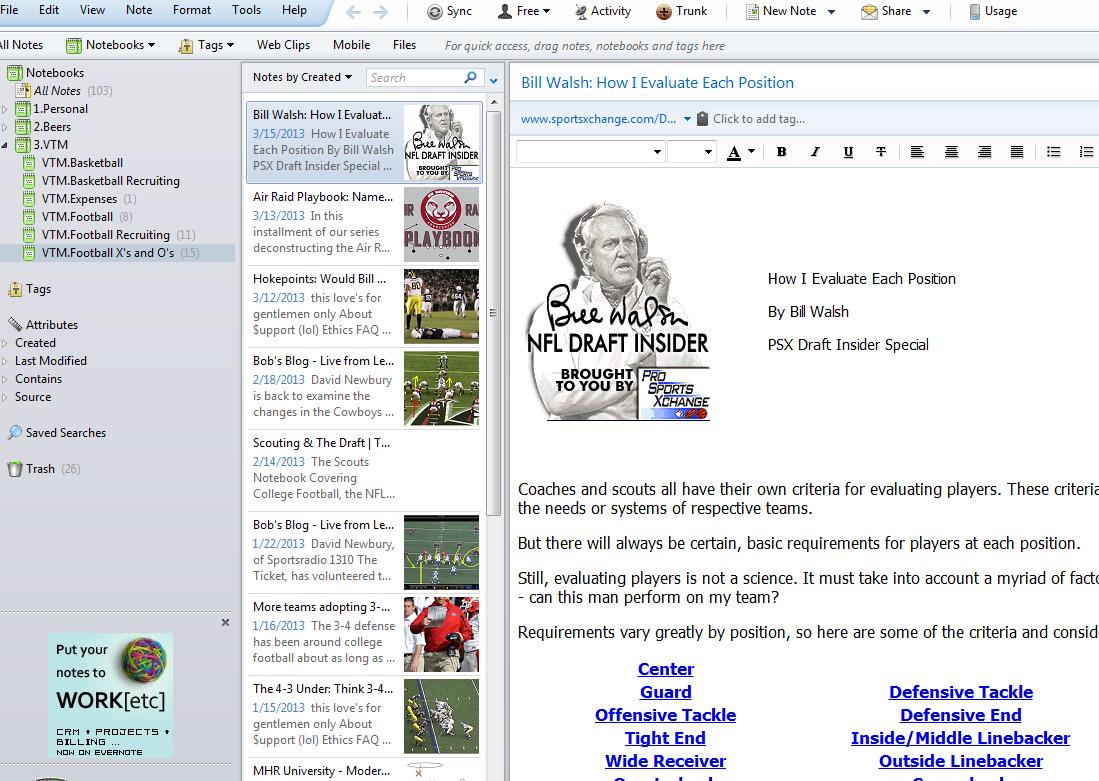 Evernote is a place to remember things, but for me it is to remember big ideas for posts. Not small things, but bigger story ideas that will take some time to develop. The clipper shown above helps me remember things on a day-to-day basis, but Evernote aggregates the really big ideas or things that I need to remember for a long time. For example, I have a hard time coming up with gift ideas for myself. I am not easy to buy for, but by keeping a list of things that I would want over the course of a year, then it is easy to go back and give my wife a list of things that I like.

Another example, as you can see from the screenshot, is that I have a personal and beer folder in addition to VTM things.I like to try different IPA's, but I cannot remember all of the breweries and names. So I take a photograph of the bottle, type out the name of the brewery and the name of the beer, and then make some comment about the beer and so that I can remember if I've ever had that beer or if I liked that beer.

It works the same for VTM. I plan on doing a series on the 3-4 or 4-3 defense this summer and so I will use Evernote to work on that and remember links or other articles on the web for a very long time. And when I'm on the internet and I find something, I just put the site or link in the right notebook and it is there when I want to write.

If SB Nation ever got rid of the Clipper, I would figure out how to use Evernote to remember those daily links.

This is how I write. This is how I am able to get things done. I'd be interested to see if anyone else has any other method of how you remember things or how you write.