I've often dreamt of being a real writer/journalist/photographer/gemologist. On Tuesday the Red Raider Tailgate Tour rolled into town and I got my chance. Except for the gemologist part.

The Red Raider Tailgate Tour made a stop in San Antonio and my wife and I were excited about the opportunity to attend. I left work a little early, picked up the kids, made 'em a snack while she changed a diaper, quickly changed another diaper, changed my shirt because of said diaper, and we loaded up.

We dropped the kids off at Keith's house and he told me our song is coming along great. We're collaborating on a song about Cheetos and the band Boston and the morning he walked all the way home in a graduation gown. He plays the guitar and bongos and foot tambourine and harmonica and ukulele and I write some of the lyrics. It's gonna be epic on YouTube.

We stopped for gas, of course, because no one around here knows how to get gas when we're NOT in a hurry, and then headed downtown. We arrived at the Briscoe Museum at about 6:25, parked on the 5th floor of the garage, and walked into the ballroom just in time to find our VIP seats in the open seating area in the very back next to the elevators at table 29. I snapped the title picture above to give all of you an idea of the incredible spread laid out for us. I had two glasses of tea, three glasses of water, a glass of wine, a beer, a coffee cup, six or seven forks, cheesecake and a strawberry onion salad all squeezed into less than one square foot. I felt like a king.

I wanted to provide in depth coverage of the event but I forgot my notebook and my HD camera with the mega zoom lens and my pencil so all I had was my phone and my steel trap memory. I had to wing it like MacGyver was working for the Lubbock Avalanche Journal.

First up was Ed Whitacre. I didn't get a picture but the guy is literally a giant. He thanked all the rich people and told us to buy a Chevy I think.

Next up was Chancellor Hance. He practically jumped up on the stage and went right into his story. He reminded me a lot of Mr. Peepers but his speech was actually pretty good. He talked about raising a billion dollars and Eric Ward and he said he wears skinny ties now since Kliff has been around. I snapped this HD pic during his speech. 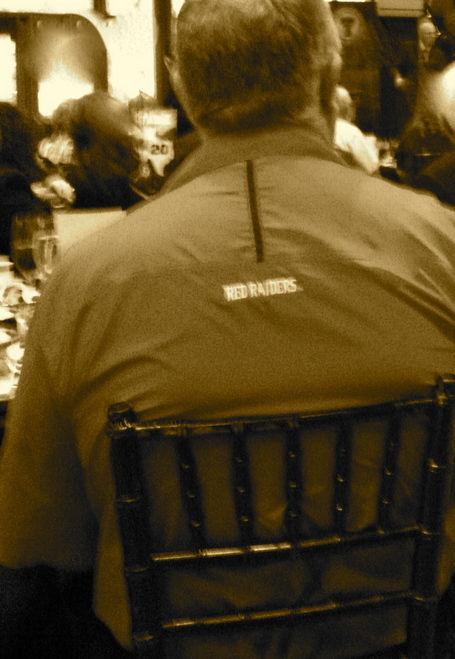 "We're a proud group but not a boastful group" 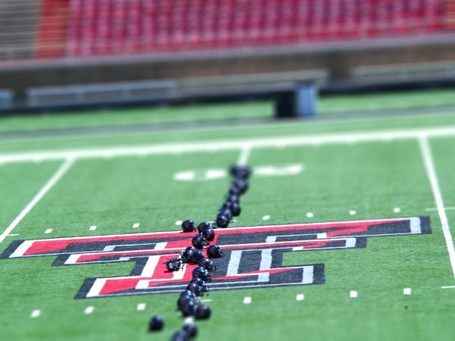 The Chancellor only spoke for a few minutes and then it was Kirby Hocutt's turn. He talked about some of the recent successes in various sports and reiterated his commitment to making Texas Tech the #1 athletic institution in the nation. It was definitely a chill bump inducing speech. Kirby is the kind of guy that can lead us into uncharted territory. In the short time he's been here, he's replaced coaches in all four major sports, and he still has a big smile on his face. Kirby is legit.

I took this picture below but I was messing around with some Photoshop features and accidentally erased him. Luckily I was able to make the dude in front of me look sorta like the Hulk which was cool and I made it look all wavy with that wand thing but sorry Kirby for erasing you. 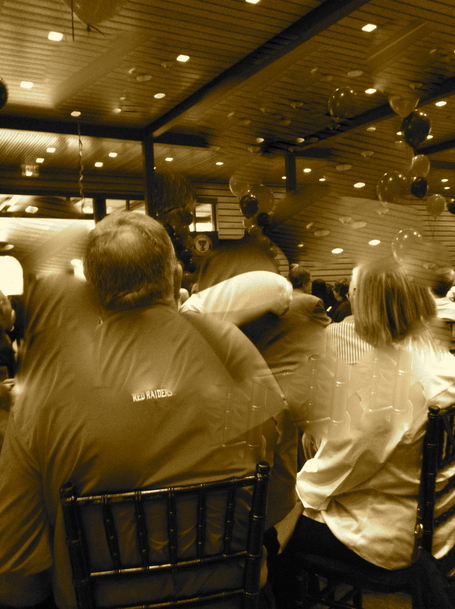 Bad ass. I promise Kirby was up there talking.

The next speaker was my new favorite coach at Texas Tech, women's soccer coach Tom Stone. He was hilarious, inspiring, and he even hit on the the girl sitting with Kliff, which brought the house down.

He said his phone rang a few weeks ago at 10:30pm and saw it was Hance and told his wife to start packing. Funny stuff.

I tried to give him a little bit of a frame and aura in the picture I took because he made everybody yell GUNS UP but I accidentally blocked him out mostly. I did get another great picture of the back of the Hulk though. 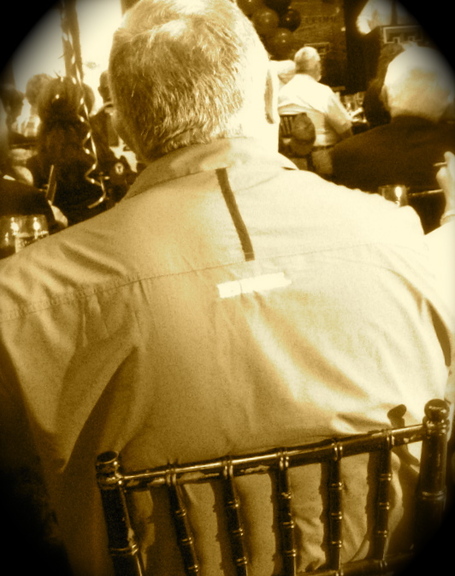 Next was new men's basketball coach Tubby Smith. He had some great stories about growing up with 16 siblings and his attempt to be a football star. He said he's still trying to learn all of the Tech traditions but wants to hang out with Coach Stone. I got a great picture of Tubby with a smoky outline. I wouldn't be surprised to see other websites steal this picture for their stories. 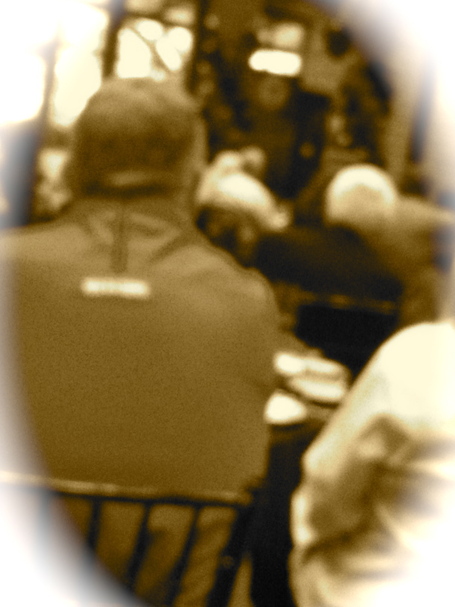 Finally, the star of the night was Coach Kingsbury. I accidentally took a picture of my foot when all the girls started squealing. 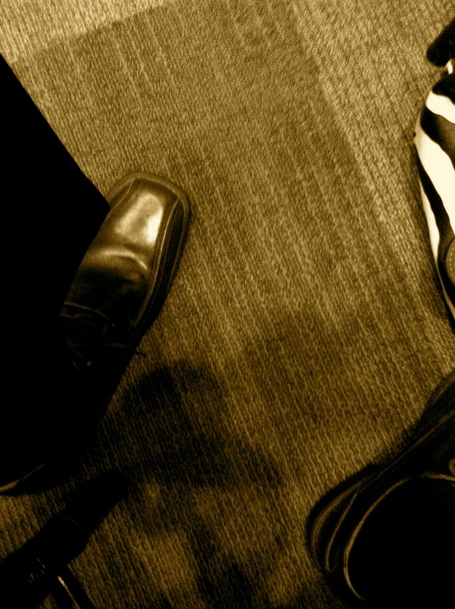 But I regained my composure and got this great HD close up. You're welcome ladies. 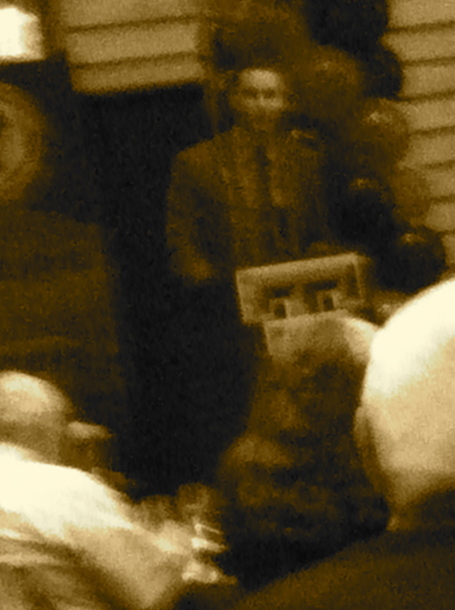 From this picture you can easily see how well groomed he keeps his stuff and how skinny his tie is.

Kliff talked straight football, and thanked his dad. I captured this picture of Kliff's dad but I was messing around with that wand again so it kinda looks like a ghost or something. 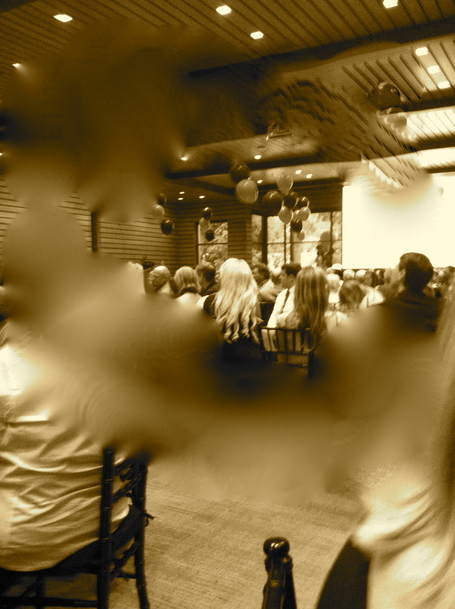 Mr. Kingsbury is the guy right under the balloon in this epic Photoshop picture.

As an aside, Photoshop makes me dream of making a Twilight movie. Kliff could be the suave, dark vampire that breaks all the hearts and then eats them. Mike Leach is the bumbling but loveable werewolf always howling at the moon and peeing on trees. Tommy Tuberville is the zombie that never makes a move. Ever. Except to punt. Together the two stars and their zombie sidekick get into all kinds of shenanigans and love triangles.

We could probably sell tens of tickets!

Anyway, Kliff wrapped up his speech pretty quickly and we hightailed it outta there. I wanted to get a picture with Kliff but he had on a blue suit and I had on blue slacks with a striped shirt and it just didn't seem to work so maybe next time Kliff we'll get a picture together so I can shove it in all my loser friend's faces so just give me a call ok?

Leaving the parking garage I handed my parking validation ticket to the guy in the booth and yelled "DON'T HATE THE PLAYA" in my best acapella voice but he didn't speak English so I waved and nodded and he opened the gate. We headed to Keith's to pick up the kids and work on the song.

All in all it was a great night and hopefully, because of my reportage and pictures, all of you feel like you were right there with me, sitting in my lap.

Editor's note: Allow me, for a second, to be completely honest for a minute. To prevent confusion, my honest comments will be in italics. For real.

I was very impressed with the entire presentation. I've thought about it for most of the day and what stands out most is the seriousness in Coach Kingsbury. He is of course the star of the show, but his speech was the least entertaining, and I mean that as a compliment. The guy is developing a very business-like approach to his job, even though the rock star element remains. He's a calming force while the circus swirls around him. He certainly has swagger, but he's also developing a palpable aura of gravitas which will serve him well in the years to come.

We've heard a lot about the "Bro" factor in recent weeks and I'm sure those guys are having fun but I got the feeling from all the coaches and speakers that there is some very serious work going on in Lubbock. I hope all the other schools continue to sleep well at night thinking there's a perpetual frat party happening in the Hub City.

Maybe I'm wrong, but I think the "Bro" thing is overblown. All of these guys want to win, and win now, and they are working their tails off to get there. They didn't move to Lubbock for the frat party. They moved to Lubbock to kick some ass.

My wife and I had a chance to chat with Kirby for a few minutes after the event. We talked about kids, and where we're from and where we're going and I think he knows I do some writing here. I was impressed.

I'm just a little ol' photographer/songwriter, but I'm also a big Kirby fan. The man is dedicated to taking all of our athletic programs to a higher level. If the coach doesn't produce, he'll find one that will. He's got my unwavering support.

After we wrapped up our conversation with Kirby he shook our hands and disappeared into the crowd. I think that he and Kliff and Tubby and Tom hopped into Kliff's chrome car. At least I'm pretty sure it was Kliff's car because who else would have a chrome car on the riverwalk, right? Anyway, I think they jumped into this bad ass car and headed off into the sunset and/or Mexico.

Because, when it comes to chrome cars and Mexico, you know what they say:

"You can take the boy outta the bro, But bros gotta hit Mexico in a chrome car."

-Alabama (The state not the lame band) 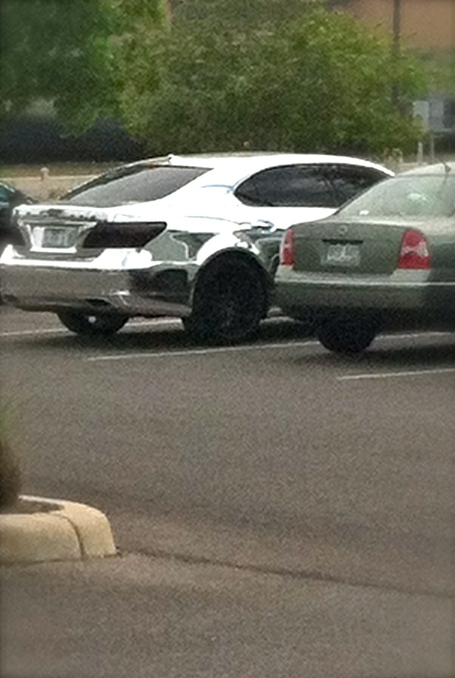