The trips left receivers take off down the field and a receiver drags over the middle.

Share All sharing options for: Red Raider Gridiron | Three Verts and Dragging Underneath

Let's start with the formation. We've got 10 personnel, trips left, and the Z-receiver to the right. Defensively, it is again a three man front with a standing defensive end or outside linebacker. I think that's a linebacker on TE Jace Amaro, who is in the slot. 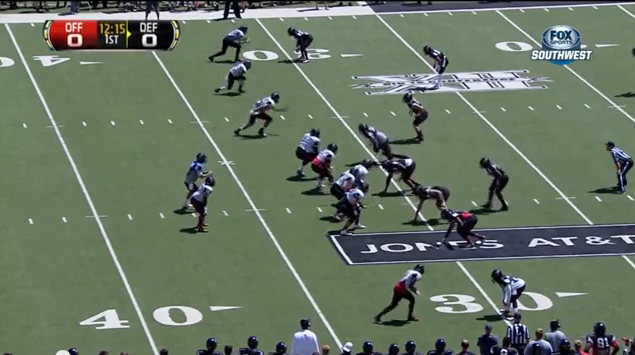 You are starting to get what's happening here. There's press coverage on the Y-receiver on the left, and he and the other two trips receivers are in full stride to get down the field as soon as possible. Also notice that the down defensive end has dropped back into coverage into the flat. That's not something that we saw much last year. It somewhat leaves the defensive end and the linebacker next to him bunched together, but it's a nice little twist. 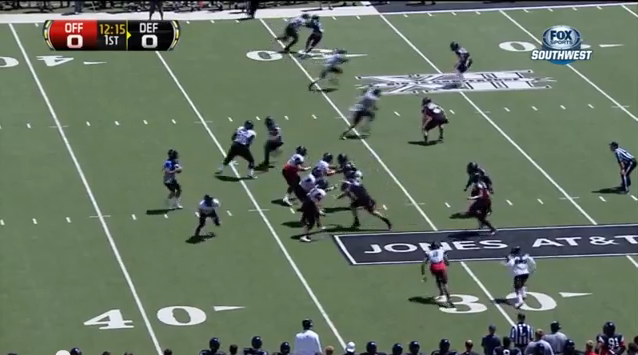 Like I said above, the trips receivers are working their rears to get down the field. Also notice the defensive backs and where their backs are turned. The cornerback on the outside has his rear turned to the inside of the field and is using the sideline as a defender. The same goes for the linebacker covering Amaro. With just a three man rush, the offensive line is holding up well. Now you start to see that Brewer's head is turned to the left (I think). That's his first read, the receivers going three verts. He's looking there, but these guys are pretty well covered. Love it. 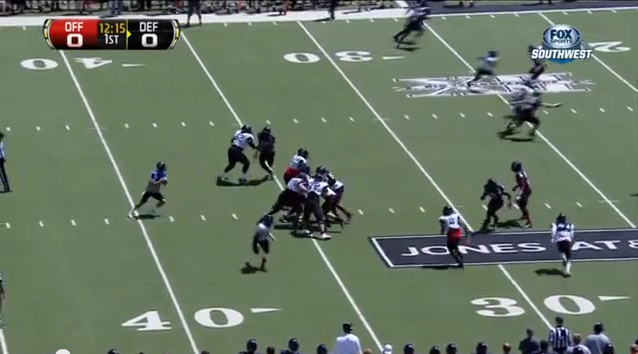 This is actually a really nicely designed play in that now, the X-receiver, Reginald Davis is starting to streak across the middle of the field. By the time that Brewer is finished checking off the three vert receivers, Davis should be over the middle of the field. It's a natural progression. Also note that RB Quinton White is headed into the flat. Also note that the cornerback that was covering Davis is taking a longer angle. He's got to get around the defensive end and linebacker. This not be where the defensive end is supposed to be. Not sure here, but the cornerback is making an adjustment that will likely leave Davis open. 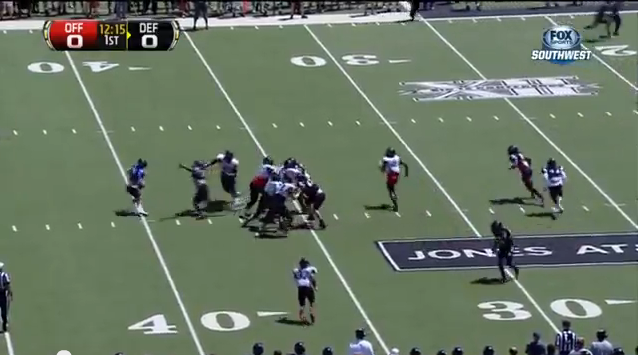 There you go. Davis is wide open, but now, Brewer is under pressure. LeRaven Clark has allowed his defender to sneak underneath him and now he's pressuring Brewer up the middle. It's clear that Davis is wide open here. He's got fields of green ahead of him. The linebacker is late to cover and the cornerback is 5 yards away. 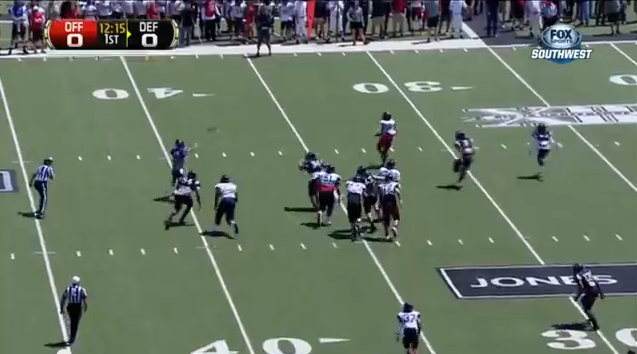 The end result of this play is that Davis ends up dropping the ball, so this isn't the most appropriate example. I liked looking at this play because the three vert receivers cleared out the entire side of the field and the play, as it was designed, provided an easy way for Brewer to find the open receiver, one way or another.