Taking a closer look at the Texas Tech spring game, including the first play of the scrimmage.

First and foremost, thanks to the YouTube user TTUFirebird for posting the entire spring game on YouTube. Wonderful.

As the spring game started and as I sat in my seat, the first play was seemingly uneventful, except for the fact that it had some things that I don't think we've ever really seen in a while, maybe ever, and I think that Head Coach Kliff Kingsbury was trying to show off a bit. Five images from this game and we'll talk about both sides of the ball.

This is a pretty standard Air Raid or spread formation, although it is 20 personnel (two running backs and no tight end) which deviates a bit as it is more traditional for just one running back. Notice that the line is pretty tight. There are no wide splits and that's pretty standard for a current spread offensive scheme. The defense is essentially in a three-down lineman front with a standing linebacker / defensive end. I think that's Chris Payne on the slot player and there are two deep safeties. 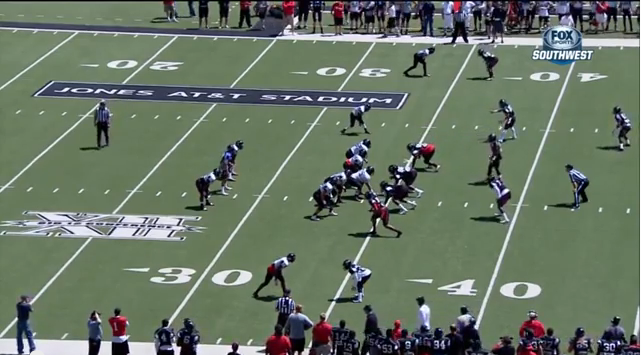 So this is where things start to get fun. The slot receiver goes into motion to correspond with the snap of the ball. Motion was not a big player for OC Neal Brown or Mike Leach. Notice that the defender that had the slot player has adjusted over to the left (I think) along with all of the other linebackers. 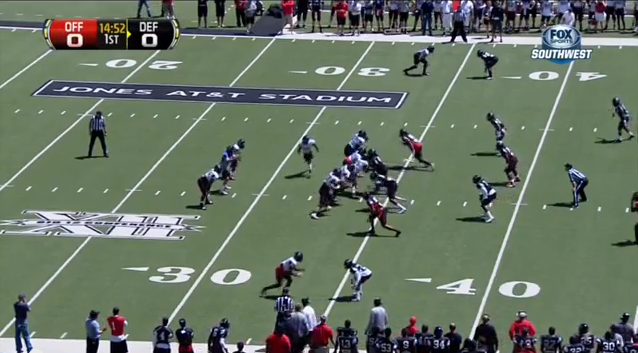 Now you've got the running backs criss-crossing each other, plus the slot receiver in motion also getting into the mix as far as being a possibility to get the ball. The standing defensive end is left uncovered and is in position to pick up the runner if he runs his way. 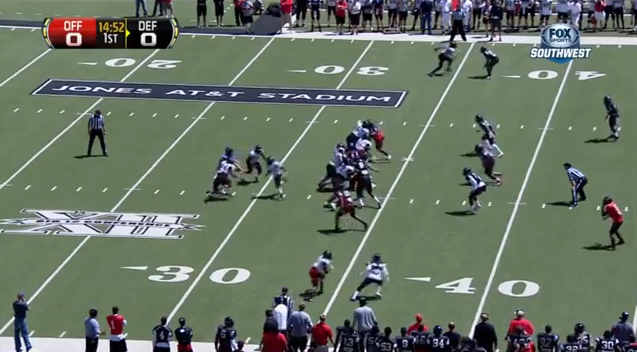 Note that the slot receiver is running up the field a bit and is in the flat. One of the running backs is left to pick up the standing defensive end and the other running back is going through the hole. It looks like at this point every receiver is accounted for except for the Z-receiver, Reginald Davis looking like he's got a window. That's Michael Brewer's only option at this point of the play. 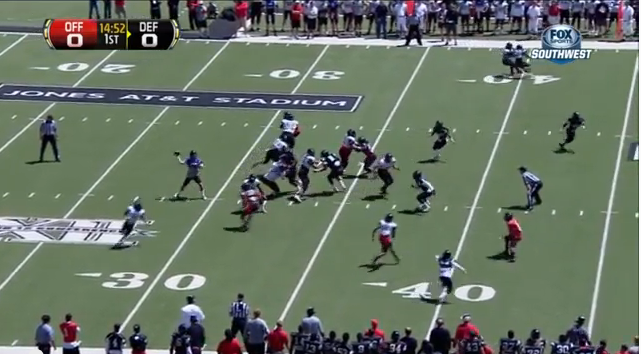 Brewer throws the ball and it is tipped or batted a bit and it if everything were to go well, Davis would have had a 4 yard gain or so. With just two players on routes, it's easy for the defense especially considering the Y-receiver is completely covered. Tre Porter is sitting on Davis and ready to make a play. 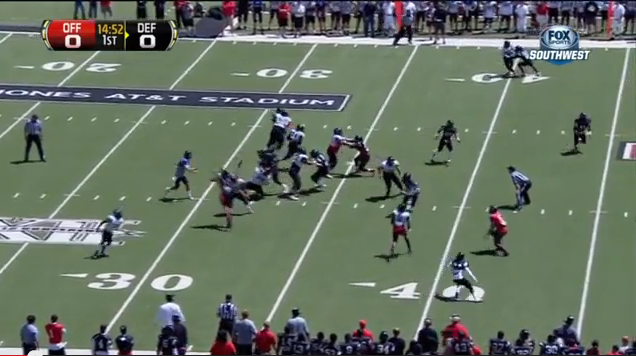 I tend to think that there was a reason why Kingsbury chose this as his first play and I think he was trying to tell us something. First, it's the idea that the guys going in motion aren't going to do what you would normally expect from this offense. They typically went in motion as a pre-snap indicator for the offense to determine what the defense was running. With this bit of motion, I think that Kingsbury was trying to show you that he's got some tricks up his sleeve. Second, Kingsbury utilized two running back, not your standard 10 personnel with guys running down the field in a 4 vertical fashion.