Theater of the Butterflies

Who will coach our basketball team? What is Paul Finebaum's phone number? Can we convince Kliff Kingsbury to juggle babies at halftime? Powerful Texas Tech men and a few paid consultants gather to tackle these pressing questions.

Share All sharing options for: Theater of the Butterflies

Location: Taco Villa on 4th by the old Albertson's

I. Quorum A Quorum was declared based on the presence of the following important people:

Dude from the T-shirt shop

The Banditos from Pig City (security)

Chancellor Hance moved to table the discussion until he could talk to his buddies Roy Williams or Doc Rivers. He seemed pretty confident that he might be able to get Dean Smith or Tubby Smith or anybody named Smith. He also said he knows Lebron pretty well so he wants to bend his ear. Pit Bull mentioned that he's been to London.

Gov. Perry's rep said that he might be able to reach out to some of the decision makers at Texas A&M but hasn't been able to get in touch with anybody since they moved to the SEC. Dude from the T-shirt shop suggested we call the Paul Finebaum radio show since that seems to be the preferred method of communication for all those backwoods rednecks. Pig City Banditos made the motion to approve and the motion was seconded by the Pig City Banditos. We'll call Paul's show and let his listeners give us advice on who to hire. Good plan.

III. Agenda Item Number II. How can we get more exposure for Kliff?

Chancellor Hance opened the discussion by immediately making a motion to forever dedicate December 12th as a local day of service. He also reminded the board that he hired Kliff Kingsbury on December 12th. He then suggested that instead of the day of service maybe we could all just write haikus dedicated to the greatness of Kent Hance on December 12th. Jim Bob Sowell seconded the motion. Pit Bull said he was just living for the moment and he rocked 'em all in Japan and he also banged some twin sisters in the DR.

Fortunately, Pit Bull started in on one of his stem winder stories to break the tension in the room. He told us he's been to Helsinki and he's out for the benchies, frankies, chinos. He said just cause you ain't him, don't hate him. As a matter fact you should thank him. Even if you don't, joel come yankees. Joel come yankees bitches.

Zig-a zig-a zig-a zig-a. Who got the key of the world, now? He's got it truly. Mami got an ass like a donkey, with a monkey. Look like King Kong, welcome to the crib. Welcome to my crib.

305, that's what it is. With a woman down here the shit don't play games. They off the chain, and they let her do everything. And anything, hit tha thing. And they love to get it in, get it on her.

Secretary's note: Pit Bull is the modern day Edgar Poe. I just wish I was Dale, because that guy has obviously lived in the presence of greatness. All night long, Dale.

Then Pit Bull made a motion that in order for Kliff to get more exposure he should start juggling babies.

He could juggle babies at fundraising dinners and during pre-game speeches. He could juggle babies after the team has a bad practice and during half time at homecoming in front of the band. He could even juggle babies during basketball season so maybe we could hire Rick Pitino or Billy Donovan or something. Those guys would be so awed by a football coach juggling babies during their games that they would for sure agree to come to Lubbock. Jim Adler The Texas Hammer said there would absolutely be no liability if Kliff dropped a baby because he was only doing it to get the people going.

Jim Bob Sowell suggested that Kliff juggle puppies instead but everyone thought that was ridiculous and booed him loudly.

Chancellor Hance restored order and seconded the motion that Kliff be required to juggle babies and the motion passed unanimously.

Chancellor Hance introduced for the record a picture he took at TJ Maxx of an eagle about to attack some dolphins. He wanted to have the picture on permanent record because he thinks it's inspirational. 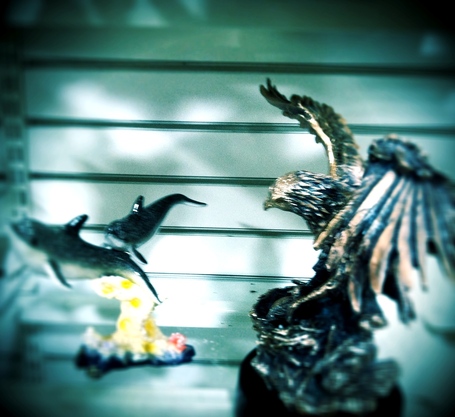 Chancellor Hance said no matter how smart those dolphins get they can never compete with the old bronze bad ass eagles ready to attack at a minute's notice, even at TJ Maxx.

He kept calling the dolphins Kirby and Kirby Jr. and stared longingly at the bronze eagle in full attack mode.

The t-shirt guy agreed to print 30,000 shirts with the picture and the caption "Your Dolphin Don't Know Dimmitt" and Chancellor Hance beamed with pride.

Chancellor Hance said he really missed Gerald and had to take off his glasses to wipe away a tear. He said he had so much fun doing the newsletters and sneaking into courtrooms and traveling to California to scout out the Pac 10 with Gerald. As a sign of respect, the board was served Gerald's favorite meal: Cheetos, Pringles, and donut holes. 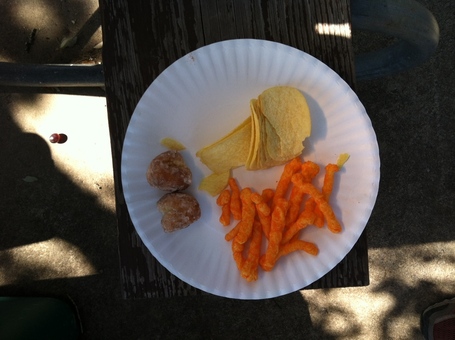 Then Governor Perry's rep pointed out that Gerald was sitting two tables over so everybody waved and Gerald waved back with his macho burrito and they all laughed and laughed.

Pit Bull made a motion to don't stop the party. The motion passed unanimously.

The Pig City Banditos requested that the next meeting be postponed until May because they have a lot of riding and protecting to do and can't commit to being able to provide the level of security necessary for the chancellor at a fast food joint. Chancellor Hance seconded the motion and it passed. The next meeting will be at Golden Corral in May. Ring the bell!

Everybody hugged. Pit Bull said he's lost a lot but won a lot. He was on bottom but now he's on top. He's like a fighter. He's been to Spain and Morocco. One Two Three Four Uno Dos Tres Quatro.

Chancellor Hance giggled and said he's from the dirty and he's reporting live from the tallest building in Tokyo and then he wrapped his tie around his head and left with Pit Bull and his crew.

The Theater of the Butterflies meeting officially adjourned at 8:17 pm.

The meeting lasted 14 minutes and nothing was solved.

All we can do is enjoy this moment and don't stop the party.