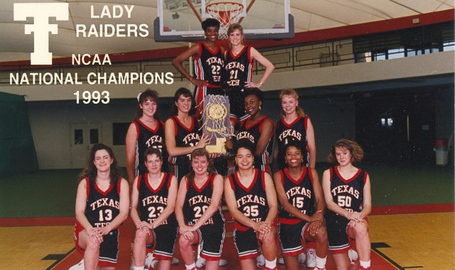 Has it been 20 years since the Lady Raiders became the National Championship?? To me the images of Marsha Sharp and Sheryl Swoopes and the other very talented Lady Raiders are still vivid. Today Texas tech will celebrate the 20th Anniversary of the NC team. The USA should be full with today's fans eager to see the women players, coaches and staff members that accomplished that feat.

The Lady Raiders (18-7, 8-5) take on the Texas Longhorns (9-14, 2-10) today in Lubbock at the USA at 2:30pm CST. The game today with the Longhorns will be the 90th time these teams have met. UT leads the series 61-28. The Lady Raiders beat the Longhorns in Austin on January. The Lady Raiders are coming off a loss to the Baylor Bears in Waco. The game started out on a strong point with tech scoring first. the first few minutes of the game we matched Baylor basket for basket but then the Lady Raiders went cold and Baylor pulled away by 20 points at the half. the 2nd half was not any better for this team. The Lady Raiders probably played their worse game of the season and fell to the bears 89-47.

The Lady Raiders are getting into a habit of coming out slow and then battling back. They need to come out aggressive and hit their FGs each and every time if they are to compete in the Big12 and if they are to beat the Longhorns today. I do like that the Lady Raiders have improved their Free-throws and are averaging 83% completions. The Lady Raiders are falling short on FGs and 3-Ptrs with only 38.6% FG% and 34.7% 3-Pt FG%. Tech again will be in the disadvantage on height, since the UT Center is 6' 7" and their forward is 6' 1", so Kelsi Baker, Christine Hyde and Jackie Patterson will need to be great on the boards and make the points on the inside if Tech is to win this game. Casey Morris will need to be accurate on their outside shots especially their 3-Ptrs. The Lady Raiders will have to focus on their set-ups and field-goal attempts and play their best defense if they want this win in Austin.

The Longhorns are number one in the Big 12 in Rebounding Offense (44.4) and have a Rebounding Margin of +9.5 ranks second in the league and ninth nationally. UT is tied at the top of the Big 12 in Blocked Shots (4.9bpg) ranks third among all Big 12 Conference teams and is also No. 33 nationally. Freshman center Imani McGee-Stafford leads all league freshmen with an average of 2.4 bpg, a mark that ranks 22nd among all NCAA Division I players and third overall in the conference.Texas has lost their last 3 games and they will be desperate to pull out a win. Players to watch for are Junior Guard Chassidy Fussell who averages 16.2 PPG and has an 85.7% FT%. The other player to keep an eye on is Sophomore Forward Nneka Enemkpali who earns 14.1 points per game and 10.4 Rebounds/game. Even though UT has a height advantage on Texas Tech, they have been slow across the floor and are on the bottom of the Big12 stats on Turnovers and Steals.

Texas Tech leads the Big 12 Conference in total steals with 191 in 16 games (11.94 per game). Texas Tech is currently in the 6th place in the Big12 standings. The Lady Raiders lead the Big 12 and are #16 in the Nation with a +6.38 turnover. The Lady Raiders have dominated their opponents by outscoring them an average of 14.6pts per game. Tech's FT% is currently 81.3%. Coach Kristy Curry is in her 7th season and her current record at Texas Tech is 121-91 and but is only 5-9 against the Longhorns.

The Longhorns' Head Coach, Karen Aston is in her 1st season with Texas. Her career record is 101-63. She was the Head Coach at Charlotte for 4 years (86-44) and one year at North Texas (15-16). Previously she was an Assistant Coach under Jody Conradt for 8 years.

The game will be broadcast on Fox Sports FSNSW

The game can be heard on the radio 93.7 FM (Lubbock and on the Texas Tech Sports Network (www.TexasTech.com) and KVET-AM 1300 "The Zone."

Live stats will be available on Gametracker at www.texastech.com/gametracker

Gamethread goes up at 2:15pm