Seth C has your holiday gift ideas for the blogger dad that wants us all to be awesome and maybe channel Bruce Lee.

Share All sharing options for: Holiday Gift Guide for the Blogging Dad to Channel Bruce Lee

A few weeks ago I presented the idea of doing a Viva The Matadors gift guide to all of the writers for VTM and I thought this would be a great idea for the VTM blogging team. I then proceeded to draw a blank as far as what I wanted my page to be about, so I just started to look for things that I thought were awesome because that's how I roll. For the rest of the day, you will hopefully see gift ideas from the various bloggers on VTM and this post will serve as your story stream to find all of the gift idea posts.

"Forget about winning and losing; forget about pride and pain. Let your opponent graze your skin and you smash into his flesh; let him smash into your flesh and you fracture his bones; let him fracture your bones and you take his life! Do not be concerned with escaping safely- lay your life before him!! -Awesome Bruce Lee Quote

As a Texas Tech fan, I tend to obsess over things. I tend to think about the team a lot and how to fix the team and really, I can't do anything. I just a blogger, but I can make a suggestion. We as fans can't buy things for players because it would be illegal, but I'd really like to give the entire team Bruce Lee playing cards for two reasons. One, because Bruce Lee was awesome. Two, because Bruce Lee said things like this (and other totally awesome things):

"Be like water making its way through cracks. Do not be assertive, but adjust to the object, and you shall find a way around or through it. If nothing within you stays rigid, outward things will disclose themselves.

As a relatively new dad, I really didn't realize the importance of duct tape. Fitsum has a big wheel and he loves that big wheel. The back seat broke and rather than try to buy him a new big wheel, I proceeded to "fix" said big wheel with duct tape. It worked great. The only thing that didn't work great was the fact that the duct tape wasn't Texas Tech duct tape.

One thing that I've noticed on my travel to Ethiopia is that people still like to drink beer and that includes me. One of my biggest annoyances was that I didn't have a beer bottle opener and I now offer to you two options. Both are awesome. The first option is the travel friendly Brewzer and fits on your key-ring, which is great. You can take it with you and it goes through airport security without any problems. I bought one of these for myself recently and it was a great present to myself and it has permitted me to drink beers that I normally would not be able to open without a bottle opener. You should also know that this is made in the U.S. of A.

The second option is equally awesome, the Luchador bottle opener. I don't think I need any more explanation on this.

Being a blogger, I can't tell you how many pairs of sweats I go through, because bloggers, by nature, still live with their parents (I do not) and live in a basement (I do not) and wear sweats all of the time (I will do this in the winter). It's a bit expensive, but I like to buy American if at all possible and the best American made sweats are from American Giant. U. S. of A.

Also as a blogger, I like to be efficient and sometimes, eating like a hobo makes me more efficient, and I present to you the Hobo All-Purpose Knife, which is a fork, knife and spoon all rolled into one. The description below says that it is good for a gift of personal defense. I completely agree.

Again, in trying to be efficient there are only so many ways to keep your dranks cold without constantly having to add ice to your cooler. As a blogger, we only have so much energy to crawl out of the basement, so we have to be efficient. There is no cooler more efficient than the Yeti cooler with the Texas Tech logo on it. Don't doubt me on this. I promise you the Yeti cooler is awesome. I don't actually own one, but I've seen this sucker in action on a hot July or August day. I'm saving my duckets to buy one of these.

Another thing that you need as a blogger is power. You can't be without power, just ask Scotty, sometimes we all need a wee bit more power. So you need a battery pack. This is also incredibly helpful on 17 hour plane rides home from Ethiopia with a child that needs to be entertained. So here's the Satechi USB power pack. Look, this isn't sexy, but when you need some more juice and you're on the go, you'll thank me.

As a blogger, you are generally incredibly un-athletic.  It is why you are a blogger in general. You write, because you cannot do what they do.  They also mock you because of that.  Most likely in high school, you never got a letter jacket.

Problem solved of not ever having a letter jacket?

Thanks to the good folks at BuildYourJacket.com, where they clearly state on the front page of their site, "Most. EPIC. Jacket. Ever. This is not an overstatement! We produce the BEST jackets created ON PLANET EARTH. (It would be Universe, if shipping wasn't so costly)".  The only thing missing is the awesome VTM logo in the middle of the center of the back of the jacket. 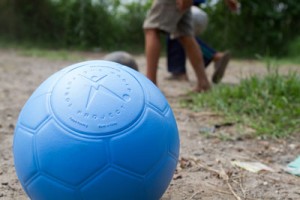 Last, but not least, I give you to the joy of giving to others. No, this isn't a football, it's a futbol. In Ethiopia, when Fitsum was sleeping and we were staying at the house where the children all stayed before before going to their eventual families, there were soccer games every day right after lunch.  Like anywhere else, kids love to play and in most countries other than the U.S., the preferred sport is futbol or soccer.  The reason for that is because it takes just one piece of equipment, a soccer ball. The only problem is that these soccer balls would continually lose their air and they would continually be punctured.  I think I saw two soccer balls lose their air in the week that we were there.  At that point, lunch for the kids isn't as much fun.

Enter, the One World Futbol. So here's the pitch on this ball, it's incredibly durable and it is doesn't require you to air it up. That's right, you just play until the thing wears out. The other cool part is that when you buy a ball, you donate one to a third world country. I can promise you that there are few things that bring joy to the heart of kids that don't really have anything, but like every other kid, they love to play games. I didn't know about this ball until recently, but Fitsum is getting one this year. And you get to choose where you want to donate, so if you want to help people here in Merica, then that's cool. If you want to help somewhere else in the world, that's cool tool.