Share All sharing options for: Tuesday Morning Links at Viva The Matadors | 2013-01-08

The men take on Baylor tonight at 6:00 pm. The game is on ESPN2 I think. The Lady Raiders host Kansas St. tomorrow night and they will be on FOX College Sports. So how about that game last night. The cold dark and lonely offseason begins.

* BCS: How Much Is Your College-Football Team Worth? - WSJ.com | If you read the article, this isn't actual value, but if your college football team was sold like an NFL or NBA franchise (hat-tip Pistols Firing). I did a graph and a table: 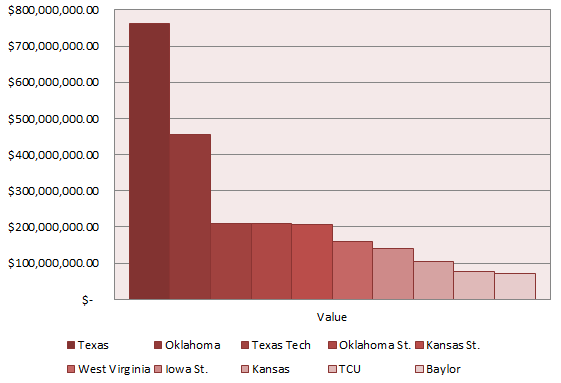 * The Last Game of My Career ~ Student of the Game | Hat-tip good sir.

* Handing out the Big 12's bowl grades - Turfburner | I can handle a C and that seems about right.