Bye Week Film Room | Third and Long and Broken Up

Share All sharing options for: Bye Week Film Room | Third and Long and Broken Up

When we last left the defense, they had New Mexico on a third and six yards to go. New Mexico isn't a passing team, but they decide now is a good time to go with four receivers. Since Texas Tech will most likely see a lot of this look, I figured we'd continue to see what to look for during conference play. The first thing to note is that I think that Texas Tech is in nickel coverage with Tre Porter at the top of the screen on the inside receiver and I believe that a linebacker is covering the inside receiver on the bottom of your screen. Other than that, you have pretty tight man coverage as the cornerbacks are within 2 yards of the receiver. 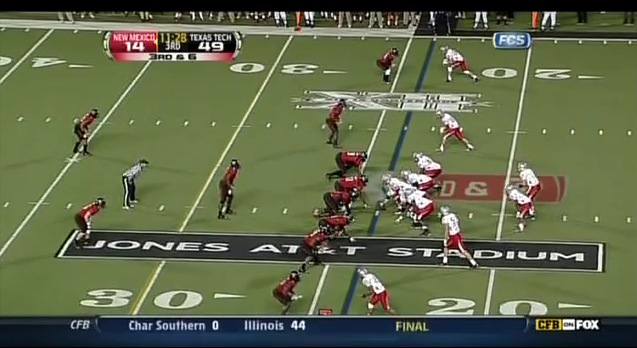 This is interesting for a couple of reasons, the first being to look at the cornerbacks and see how they are forcing the receivers immediately to the outside, towards the sideline. I am sure that DC Art Kaufman was thinking that the New Mexico QB doesn't have a great arm and getting the ball out to the sideline isn't especially easy if you don't do it all that often. Also note that the UNM QB is now 7 yards behind the line of scrimmage after taking a three-step drop on the pistol formation and the line has essentially crumbled with LB Will Smith essentially watching the quarterback to see what he does. 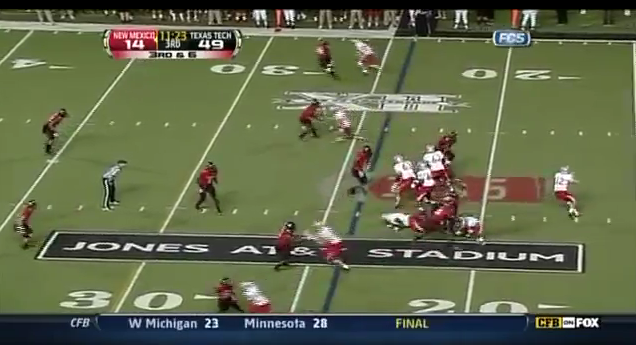 This is probably the most troubling thing that I saw, which is that Porter hands off the inside receiver to the safety in the middle of the field and is running to help the cornerback on the top of the field. You know it's zone coverage, but Porter isn't going to help anyone because he's five yards behind the play. Luckily, CB Bruce Jones has got this covered as he's with his name stride for stride. Not only that, the UNM QB has not looked at any other option and essentially stared down this receiver. Everyone should know the ball is going to this receiver. 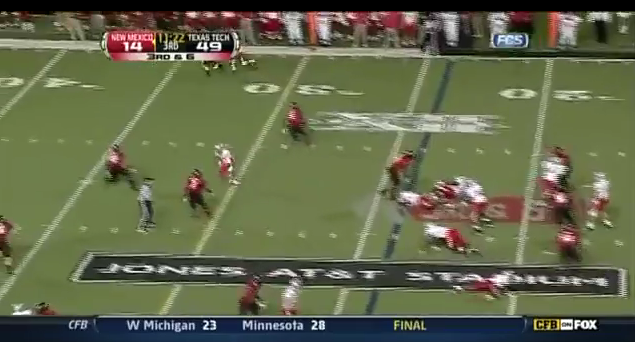 Fortunately for Texas Tech, Jones has a 40" vertical jump and is there without any issue in terms of breaking up this pass. Jones is on an island and he didn't really have any problems with knocking the ball away for an incompletion. Texas Tech will see much more of this with much more competent quarterbacks in Big 12 play. My biggest complaint is that Porter has to be quicker at handing off the receiver, but honestly, I don't know if that's accurate or fair on Porter. He has to go where the receiver takes him. The other downside is that D.J. Johnson isn't near the play, but he is also maybe being asked to take the middle of the field. 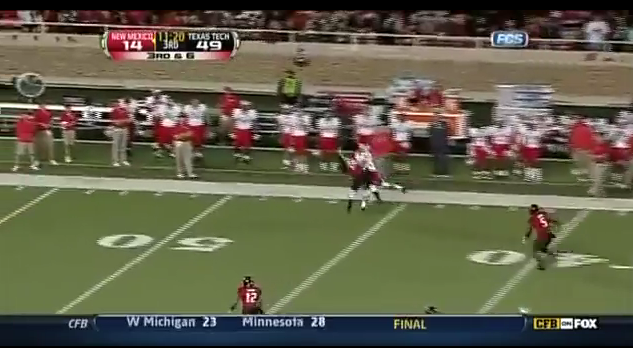