So we move back to the offense today and this is one of my favorite formations because it is relatively rare and we don't see it all that often. What we have here is Pistol formation using 22 personnel, two running backs and two tight ends. The situation is a third and one in the third quarter and Michael Brewer is the quarterback. In watching the video, I think that Beau Carpenter was actually in the game as the right guard and Alfredo Morales runs in and Carpenter moves over to tight end on the left side of the line while TE Jace Amaro is on the right side of the line. RB Omar Ontiveros is your up-back while RB Kenny Williams is your tailback.

The reason why I like this so much is that over time, this team sometimes had trouble gaining a yard, but the attempt was usually out of some spread formation using 10 personnel. Offensive coordinator Neal Brown decided that he wanted to be able to run the ball and this is as traditional a formation that you will see Texas Tech run. This isn't a criticism of prior philosophies, but an appreciation of this one. It's just fun to watch two teams both acknowledge that they are going to run the ball, although Texas Tech does have options, especially out of the Pistol to fake to Williams and get Amaro over the middle or in the flat for a first down. 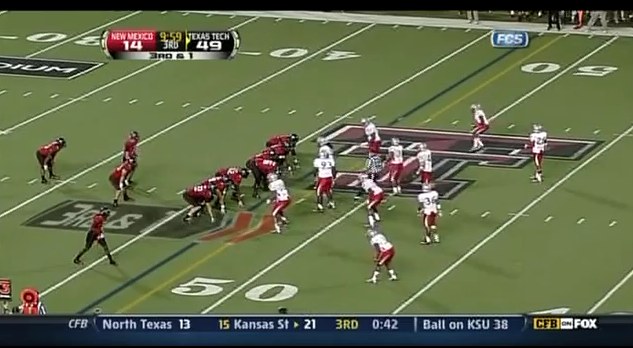 This is actually pretty neat in that essentially the line is engaged and now we know that Morales is going to be pulling to the strong side of the line. Ontiveros is looking to level someone. 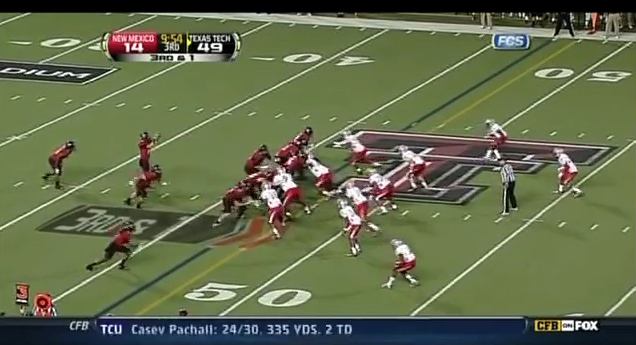 Notice the push and the fact that the defense has been pushed back quite a bit. Ontiveros and Morales haven't even hit anyone just yet and I'd also add that it looks like WR Bradley Marquez is looking to seal a block as well. I think there are six New Mexico defenders that are engaged in a block. 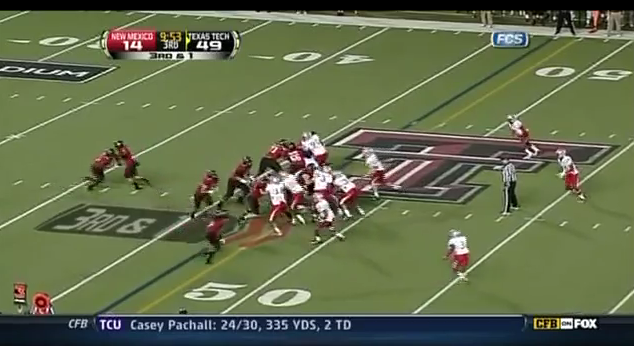 By this point, Ontiveros and Morales have each found a man and the only person within 10 yards is a New Mexico linebacker that is coming in very late and has already given up the first down to Williams. Williams is already past the line of scrimmage and Williams, I think, gains 4 yards on the play. Part of the reason why New Mexico struggles is that there are three New Mexico players not even within 10 yards of the ball at this point of the play. 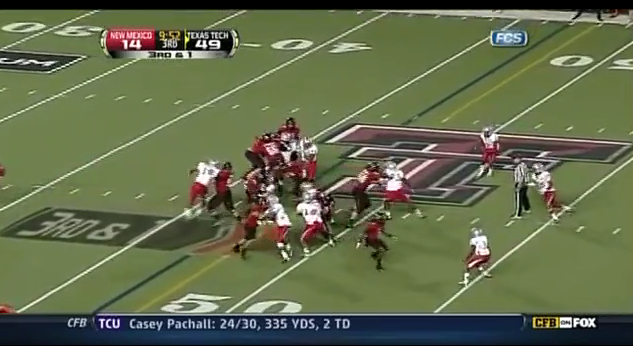 This play is really only insightful from a formation standpoint and seeing it properly blocked, but I really like this sort of stuff.